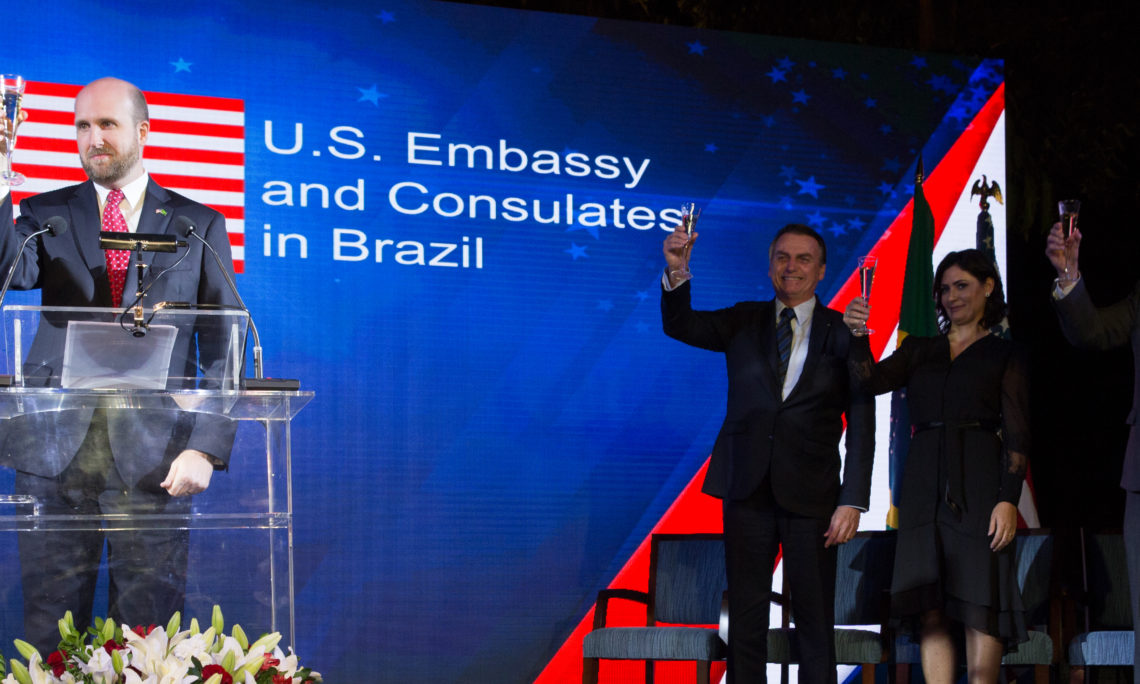 I’d like to thank the President of the Federative Republic of Brazil, Jair Messias Bolsonaro, and the First Lady Mrs. Michelle Bolsonaro for their presence tonight. It is a great pleasure and a great honor to receive you here at the Embassy.

I have officially celebrated the 4th of July six times in the last week in our consulates all over Brazil, but your historic presence here makes this a particularly special night!

I want to thank the Minister of Foreign Affairs Ernesto Araújo for his presence here on the stage and for his strong collaboration in the advancement of U.S.-Brazil relations.

I would also like to recognize the presence of the following officials:

It’s an honor to have you here to celebrate this night with us.

I would also like to express my special thanks to all the members of the Brazilian government, federal deputies, senators, representatives of state and municipal governments, of the Armed Forces, law enforcement, education, culture, and from so many other sectors for joining us.

Thank you also to all the American companies that sponsored this event. Tonight’s celebration would not be possible without your generous support!

I would also like to wish our American citizen community here in Brazil a very Happy Independence Day. All of us at the Embassy are proud to celebrate this cherished holiday together with you tonight.

As we celebrate the 243 years of U.S. independence, we are also celebrating the 197 years of diplomatic relations and deep historical ties between the United States and Brazil.

In a few days, I hope we can celebrate the historic victories of Brazil in the America Cup and the United States in the World Women’s Cup!

As you just saw in the video, in the last year, our long partnership has become even stronger and with concrete results.

This was highlighted during President Bolsonaro’s visit to Washington in March, and detailed in the joint statement with President Trump that listed more than 15 new areas of partnership, including:

And the work continues, as was evident during the bilateral presidential meeting at the G-20 last week.

We are creating new mechanisms to attract investments in both countries and fostering a more dynamic commercial relationship.

On this last point, I would like to note that, last week, the United States officially elevated the level of our Consulate in Porto Alegre to Consulate General – this is one more example of our commitment to Brazil.

In practical terms, our cooperation is creating jobs, improving security, promoting democracy and strengthening the ties between Brazilian and American people.

With a long tradition of friendship and new purposes ahead, the partnership between the United States and Brazil will continue to bring great benefits to the well-being of our citizens.

Before I conclude my remarks, I would like to thank my colleagues at the Embassy and our five consulates for their exceptional work this year. A great part of the advancements achieved is due to your efforts.

I wish to particularly thank my adjunct Doug Koneff. During the last year, he has been a great partner in advancing our diplomatic mission and bilateral relation.

Finally, I wish to thank all of you for your contributions to strengthen the relationship between our great nations.

Together, I am sure that we will achieve incredible results!