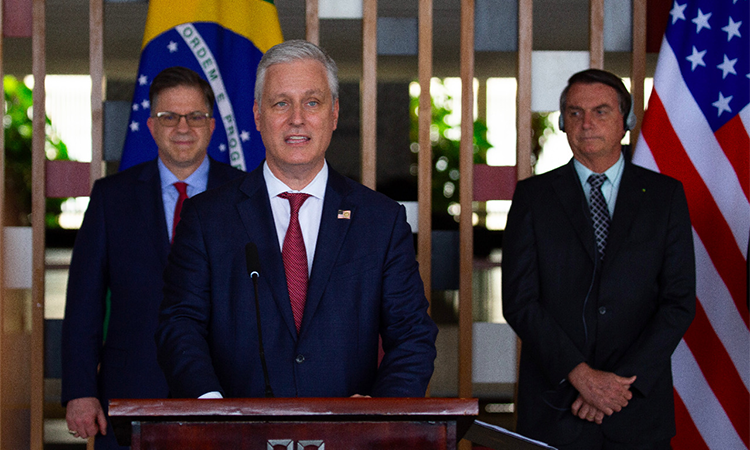 Amb. O’Brien Remarks at the Joint Press Conference at Itamaraty

Mr. President, Foreign Minister, thank you for hosting me. It’s an honor to be here. And I bring you greetings, Mr. President, from your friend President Donald J. Trump, the 45th President of the United States.

We share a long history of mutual respect and partnership that began in 1822, when the United States, under President Monroe, became the first nation to recognize Brazil’s independence. Ours is a relationship rooted in our common values, of geography, and of shared social history.

We have long collaborated on a wide variety of issues—and today, our nations are closer than ever. In fact, I don’t think we’ve had a better relationship with Brazil than the United States has today. And in 2019, President Trump designated Brazil as a major Non-NATO Ally of the United States. So, we’re not just partners, we are allies. We established the U.S-Brazil Energy Forum, We signed an MOU under America Cresce — Growth in the Americas — to incentivize private sector investment in Brazil in infrastructure, energy, transportation, and telecommunications.

Yesterday, the DFC (Development and Finance Corp.) announced nearly $1 billion in approved and potential deals in Brazil. Those are U.S. investments in Brazil, in entrepreneurs in Brazil, in women entrepreneurs in Brazil, in small businesses, and this is in addition to the $1 billion that the DFC has already invested in Brazil.  It includes $400 million for small and medium sized enterprises, $300 million to expand lending to women, $259 million to modernize Rio de Janeiro’s public lighting, and $25 million to boost Brazil’s mining sector. Already this year, the US Export-Import Bank (EXIM) supported $450 million dollars in transactions in Brazil with potential pipeline opportunities valued at an additional several hundred million.

In fact, Brazil saw today the signing with Minister Guedes and EXIM Chairwoman Reed a Memorandum of Understanding to identify sectors for cooperative business development that will lead to another US$1 billion in EXIM financing especially in the telecommunications area and the important 5G — a new modern telecommunications network that Brazil will have soon.

Yesterday, the United States Trade Representative Robert Lighthizer signed a new trade protocol with Minister Guedes and Minister Araújo focusing on promoting customs administration, trade facilitation, good regulatory practices, and anticorruption measures. This agreement will set a new gold standard — this is a modern cutting-edge trade agreement that will streamline border crossing trade, and strengthen our economic relationship Between Brazil and the United States. As I heard loud and clear in our meetings with industry in São Paulo yesterday, these agreements will unleash exciting new opportunities for entrepreneurs in both Brazil and the United States.

Our two nations are also working to address global environmental and health challenges, strengthen law enforcement and justice, promote energy security and regional and global stability. Together, we combat terrorism, narcotics, arms trafficking, cyber trafficking, money laundering, human trafficking — maybe the worst scourge of them all — through the United States-Brazil Security Forum. And recently, we inaugurated a pilot project for biometric data sharing which will enable faster cross-border travel but also enabling our law enforcement officers both in Brazil and the United States to catch bad actors.

We share a strong commitment to democracy in the Western Hemisphere, including the need for free and fair democratic elections in Venezuela. We agree that the Democratic Transition Framework provides the best way forward for Venezuela. Brazil has provided true leadership on this issue hosting nearly 265,000 refugees from Venezuela. And what a sad thing that is and what a sad thing socialism has done to that once great country, that once rich country. And Brazil is showing us tremendous humanitarian streak, its desire to help its neighbors and hosting those refugees.

The United States and Brazil have joined together and are signing  the Artemis Accords, our landmark global initiative for space exploration cooperation, alongside seven other nations.

And so what these agreements that I have just been discussing demonstrate is the partnership between our two countries is robust—and our relationship critical to peace and prosperity for our citizens, not just in America, not just in Brazil, not just in the Western Hemisphere, but across the globe.

Foreign Minister Araújo and Mr. President, on behalf of President Trump and the American people, we thank Brazil for its friendship, we thank you for your partnership, we thank you for being such a great ally. An alliance that has gone back many, many years and maybe was at a similar high point in World War II, when we fought together.  The United States is proud to stand with Brazil — and we are ho nored to be your trusted ally and partner.

Thank you very much.