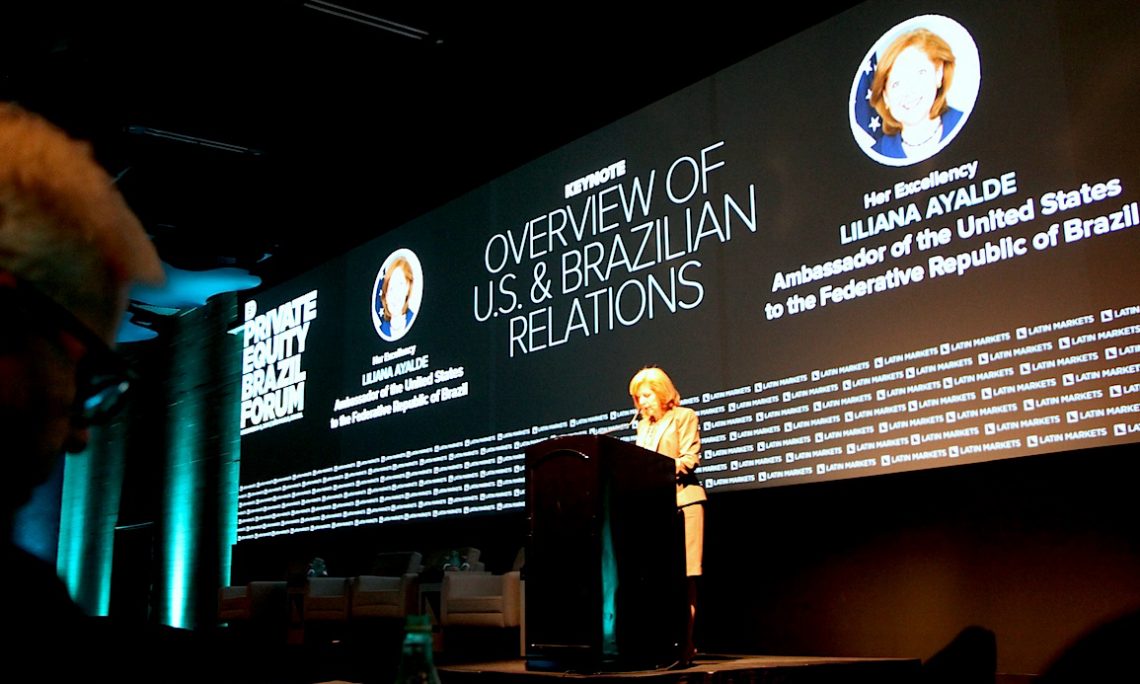 Good afternoon.  It’s truly an honor to have the opportunity to address such a distinguished group at this 6th now Annual Private Equity Brazil Forum 2014.

I’m particularly grateful to Ahmad Sahar, Partner of Latin Markets, for the invitation. And I really congratulate you for having brought together such an impressive array of speakers as well as participants.

It is indeed positive to see so many U.S. and other international investors here today to explore current and future investment opportunities in Brazil.  Let me start by saying, you are in the right place.  Brazil is and will continue to be one of the world’s essential markets for truly global firms.  The question most of the U.S. firms that I meet with have when they visit Brazil is not “whether?” but “how?”.  They look with great interest at this continental-sized country teeming with a diverse population of 200 million people.  And while a continental-sized country, we sometimes miss the scale of Brazil.  The population of Sao Paulo state is about the same as Argentina’s.  The GDP of Brazil’s BRICS partner South Africa is less than that of Sao Paulo state.  The Northeastern city of Recife has a GDP the size of Nicaragua’s.  I could go on with these kinds of statistics – but instead let’s look closer at Brazil’s 200 million people.  Millions joined the middle class over the last decade, and more than half of Brazilians are now in the middle class consumer market.  Millions of Brazilians have bought their first car, their first computer, first washing machine, and have taken their first trip to Disney World. Over the last years this has increased, and despite the current economic slowdown we anticipate that in the medium and long-term, they will continue to aspire to drive the Brazilian economy.

What I have realized in the years since I returned to Brazil since spending about three years in Rio de Janeiro when I was a child, is that the U.S. and Brazil share so much in common with each other, and that it is usually small differences that catch most business people by surprise here.  When you do business in places like China and India where things can appear to be different, the smallest similarity takes on outsized importance in your perceptions and responses.  By contrast, in Brazil where most things you see will seem very familiar, it is often those small, unexpected differences, like the hardy sprinkling of rock salt on your beautifully prepared steak at dinner, that take on an outsized role in your perceptions.

At the end of the day, though, what we have in Brazil, as we do in the United States, is a very large and diversified economy that developed and grew by focusing mostly on satisfying a large domestic demand for products and services.  We are the two largest agricultural producers in the world, the biggest users of Facebook and Twitter, and the leading producers of aircraft, automobiles, and many, many other products.  Both countries make policies based principally on domestic considerations and have strong preferences for developing their own unique solutions to challenges rather than importing them from other countries.   One only need to look around this large and complex market to see some of the unique solutions Brazil has developed over the years to expand its economy and make products and services increasingly accessible to satisfy growing consumer demand, whether it’s dividing even the smallest purchases into installments, or granting greater access to small banking services via the lottery shops, to the plethora of services available to clients through ATMs.

As most of you probably know, U.S. companies have long played an important role in Brazil, with many operating here for a century or more.  While our relationship with Brazil covers a wide range of areas, trade and investment without a doubt represents one of its most important pillars and has a huge positive impact on all other aspects of our relationship.  Even though trade and investment are at record levels — in both directions, I should add — that does not mean that the well-known “Custo Brasil” or “Brazil Cost” suddenly vanished.  American and Brazilian firms have figured out how to succeed, and our governments continue to explore ways to facilitate business.  To us, the record levels of trade and investment are just the start.  As we achieve greater economic integration, the numbers will really go up.  Notwithstanding the current economic slowdown in Brazil, in my view the future is bright for firms that focus on the medium and long term, taking advantage of times like these to expand and modernize their presence here, and strengthen their market positions for the next period of growth that the world’s seventh largest economy will undoubtedly experience in the years to come.

Now that the elections here in Brazil have concluded, the United States looks forward to ramping up its engagement with the Brazilian Government and broader society on a wide range of bilateral and global issues.  When President Obama called to congratulate President Rousseff, he underscored the importance of our partnership with Brazil and said the United States wants to move forward and to deepen the engagement between our two countries.  Vice President Biden called as well, and President Rousseff invited him to the inauguration.  Secretary Kerry spoke with Foreign Minister Figueiredo and offered a similar message – that we have a shared interest in raising the bilateral relationship to an even higher level.   In that vein, Vice President Biden has confirmed that he will lead our delegation to President Rousseff’s inauguration on January 1.  Joining him will be the State Department’s lead policymaker for Western Hemisphere Affairs, Roberta Jacobson.

For both countries, the priority looking ahead is the same:  a fruitful, forward-facing partnership across a number of fronts. President Rousseff has publicly and privately reaffirmed her interest in building stronger relations.  And we are now discussing scheduling a possible visit by President Rousseff to Washington, sometime in 2015.  We will be working very hard, with input from the private sector in forums like this and the CEO Forum, to craft a dynamic agenda for such a visit.  Our two countries have shared interests in bilateral, regional, and global issues including trade and investment, innovation, infrastructure, the environment, energy and education.  We have a very solid to base to build on.  For instance, Brazilian companies account for an estimated $14 billion in Foreign Direct Investment and employ over 76,000 American workers.  We expect these numbers to continue to grow in the future as Brazilian firms continue to expand.  In 2013 I had the pleasure of leading a Brazilian delegation to the first Select USA Investment Summit in Washington D.C., which ended up being the largest delegation from Latin America and included many firms that have since made important investments in the United States.  The next Select USA Investment Summit will take place in Washington in April of 2015 and I look forward to leading an even larger delegation of Brazilian investors to that event.

Let me also briefly comment on any rumors that you may have heard explained differently — frozen relations or so forth. Some were saying that our governments stopped working together, there was a pause, there was a freeze over the last year due to the NSA disclosures. We frankly did have some difficult and tough conversations; but most of the activities I just mentioned continued and even expanded in that period.  In fact, just two months ago our two governments were able to successfully resolve a major long standing agricultural trade issue.

Here in Brazil, U.S. companies continue to contribute significantly to the expansion of the country’s scientific, technological and innovative capacity — one of President Rousseff’s highest priorities has been and continues to be expanding the country’s scientific, technological and innovative capacity.  In 2012, she launched the highly successful Science without Borders program, known in the United States as the Scientific Mobility Program.  The numbers of students participating in the U.S. program alone is impressive.  There was a 22% increase in the number of Brazilians studying at U.S. universities between 2012 and 2013.  And, so far, more than 26,000 Brazilians have studied or are studying in U.S. universities under this program.  Many of the most renowned U.S. companies have stepped up to the plate offering the Brazilian students invaluable internship opportunities that have enabled them to gain practical experience in their fields of study and played an important role in empowering them economically, especially the disadvantaged students and women, to become more active participants in Brazil’s future as a technology and innovation leader in the world.

U.S. companies have also made very significant investments in scientific and technological capacity here, establishing over 70 research and development centers in Brazil in recent years.  Just last month, I attended the inauguration of GE’s new $250 million Research & Development Center in Rio de Janeiro.  During the ceremony, CEO Jeffrey Immelt stated that it was GE’s sixth such center in the world and announced that he would be committing another $250 million to the Center’s development by 2020 — conducting research in the energy, health care and transportation sectors, among others.  He said that GE had been in Brazil for 95 years, that Brazil was now the company’s third largest global market after the U.S. and China, and that its commitment to the country was for the long term.  And just last week, Boeing Brasil announced the opening of a Research & Development facility in Brasília, the company’s second in the country. There are many other examples, all of which underscore the view that Brazil is a good long term bet.

There are many opportunities for investment that firms like yours can explore here, whether it be in infrastructure, logistics, energy, information technology, agribusiness, health care, education, among some. We have economic and commercial officers in Brasília, Belo Horizonte, Recife, Rio de Janeiro, and here in São Paulo with officers to assist U.S. firms to do business in Brazil.  We have identified 30 industry sectors which offer strong growth potential in Brazil where U.S. companies are global leaders and well positioned to pursue partnerships and opportunities.  I encourage you to reach out the members of my commercial and economic teams here in Brazil if you feel they can be of assistance to you in navigating this promising yet complex market.

We believe that partnering with Brazil is a good long term bet, and are committed to working together with our Brazilian counterparts to pursue mutually beneficial goals in the years to come. As the two largest economies in the Western Hemisphere and the largest and seventh in the world, we have a shared interest in leveraging our strengths to the mutual benefit of our countries and our peoples. As our governments continue to work closely together, you will find a number of outstanding opportunities to invest in Brazil’s future and we see you as essential contributors in this deepening relationship.

Thank You and Boa Sorte!