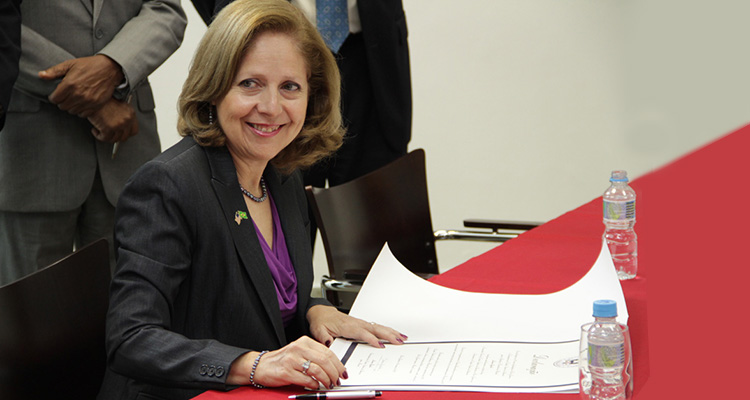 U.S. Ambassador to Brazil, Liliana Ayalde, visited Rio de Janeiro to celebrate the 450th anniversary of the city. On March 17, Ambassador Ayalde and Consul General John Creamer enjoyed a music concert at historic “Beco das Garrafas,” the famous birthplace of the Carioca Bossa Nova in the 1950s and 60s. On March 18, Ambassador Ayalde declared the U.S. Consulate General to be “Embassy for the Day,” in a special ceremony in which she signed a declaration and unveiled the U.S. Embassy seal as a special tribute to the 450th anniversary of Rio. After recalling the days of her childhood spent in Rio de Janeiro, the Ambassador spoke about the historical importance of Rio in U.S. bilateral relations, since the city hosted the first U.S. Embassy in South America. She also discussed the strength and diversity of current U.S.-Brazil relations and the key role that Rio plays in bilateral relations. The special logo developed by the Mission for Rio450 was also launched at the ceremony. The event was attended by Rio de Janeiro City Hall officials, including the Executive Secretary of the Rio450 Committee, Isabel Werneck, and a group of Carioca celebrities, including Afro-Brazilian actors Milton Gonçalves and Juliana Alves, singer Sandra de Sá and book publisher and art/photography collector George Ermakoff, as well as a group of Rio-based Youth Ambassadors.

After the ceremony, Ambassador Ayalde proceeded to a guided visit of the Rio de Janeiro Museum of Art (MAR) accompanied by four young, community journalists, who are alumni of a Consulate supported exchange program. Located in the Port Region, the museum is an important symbol of the renovation of the city. Accompanied by MAR Curator Paulo Herkenhoff and Director of Projects Tiago Cacique, Ambassador Ayalde visited the exhibition “From the Valongo to the Favela,” which discusses the Afro-descendent presence in Rio, from the times slaves arrived in the country via the Cais do Valongo, through the development of the first favelas right after the Abolition of Slavery in Brazil, to the social and inclusion challenges still faced by the Afro-Brazilian population today. At the terrace of MAR, she was also briefed on various projects related to the urban renovation of the Rio Port Region, and she could see Providência, the first favela in Brazil. The community journalists, up-and-comers in the journalism field, , interviewed the Ambassador after the tour.

Ambassador Ayalde and Consul General Creamer continued on to the heart of historic Rio for a guided tour of the historical and architectural monuments of Praça XV, in downtown Rio, led by Designer and Photographer Luiz Eugenio Teixeira Leite. Leite is the author of the book “Rio that Rio does not See,” which discusses the cultural, historical and symbolic importance of ornaments in the façades of historical buildings in downtown Rio. During the tour, Ambassador Ayalde discussed the importance of Rio in the history of Brazil, from the early 18th century to today.

Ambassador Ayalde’s visit to Rio concluded with her participation in a farewell reception for Consul General John Creamer, held at the Consulate. Consulate contacts from the federal, state and local governments, the private and NGO sectors, academia and civil society came to say goodbye to Consul General Creamer, who will depart Rio on March 31. At the occasion, Ambassador Ayalde introduced Head of the Consular Section, Michael Yoder, who will be Acting Consul General until Mr. Creamer’s replacement arrives in Rio de Janeiro.