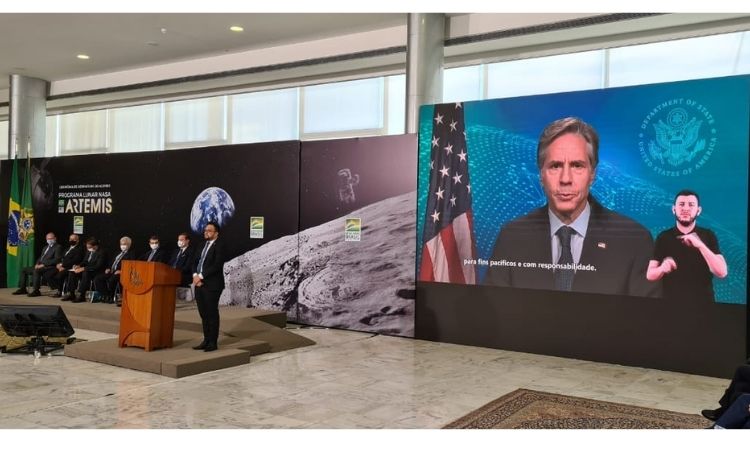 Brasília, June 15, 2021 – Today Brazil signed the Artemis accords, becoming the first South America country to partner with the U.S. in the program that will, among other efforts, land the first woman and the first person of color on the surface of the Moon. The  signing ceremony included U.S. Ambassador to Brazil Todd Chapman and the President of Brazil Jair Bolsonaro, the Brazilian Minister of Science, Technology and Innovation Marcos Pontes and The Brazilian Minister of Foreign Affairs, Carlos França, and the virtual participation of U.S. Secretary of State Antony Blinken, the NASA Administrator senator Bill Nelson, The Accords focus on creating a safe and transparent environment that facilitates space exploration, science, and commercial activities for the benefit of all nations and for a prosperous future in space.

In October 2020, the United States extended an invitation for Brazil to join the Artemis Accords, an international initiative grounded in the Outer Space Treaty of 1967.

“The U.S.-Brazil space collaboration helps ensure responsible and safe access and use of space for all of us. The partnership between our two countries is robust and our relationship critical to peace and prosperity for our citizens, not just in America, not just in Brazil, not just in the Western Hemisphere, but across the globe.”, stated the U.S. Ambassador to Brazil, Todd Chapman.

The accords constitute a landmark global initiative for space exploration cooperation. The purpose is to establish a common vision via a practical set of principles, guidelines, and best practices to enhance the governance of the civil exploration and use of outer space.

For further details about the Artemis accords, please see the factsheet here: https://bit.ly/3vqqtJT