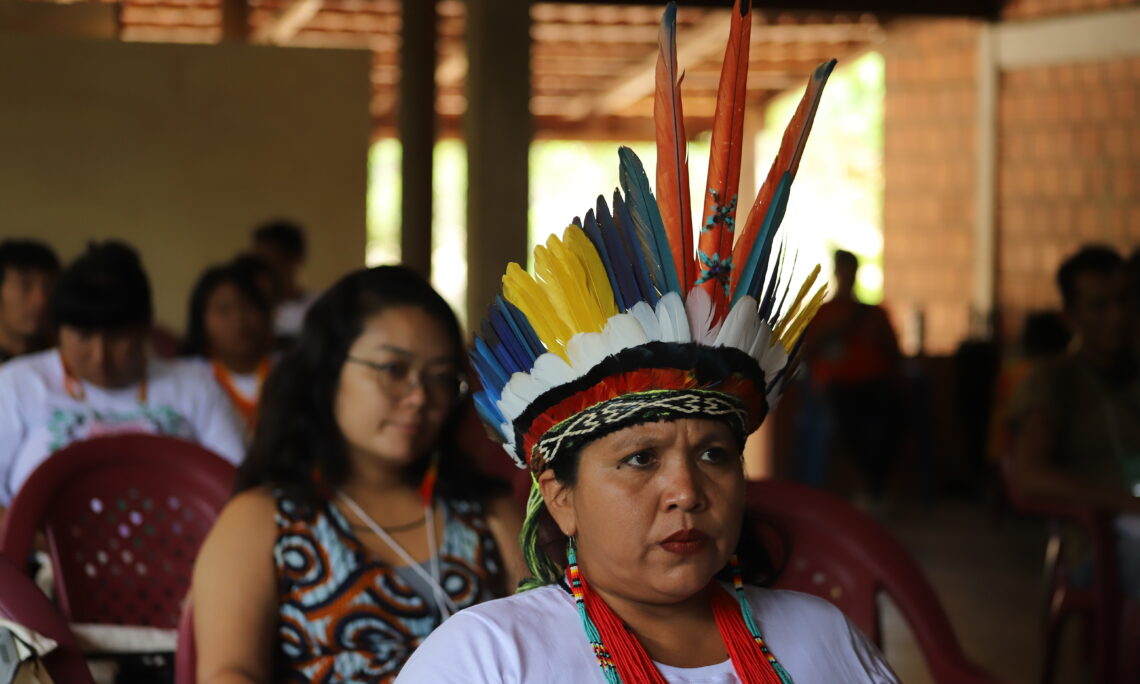 The meeting was attended by representatives of indigenous peoples and was supported by USAID Brazil, USFWS and the U.S. Department of the Interior

Brasília, December 7, 2022: The meeting “Indigenous Dialogues for Territorial Protection” took place between November 8 and 13 at the Timbira Center for Teaching and Research Penxwyj Hempejxà, in Carolina, Maranhão. The objective of the event was to exchange experiences between representatives of Indigenous Peoples from 12 regions in Maranhão and northern Tocantins and the United States about challenges and strategies for the management and protection of Indigenous Lands.

The participants discussed different issues and challenges of management and protection of Indigenous Lands. The issues covered were related to territorial disputes, pressure from illegal logging, advance of agribusiness, invasions by hunters and fishermen, climate change, and adaptation strategies. Other panels also brought discussions on environmental liabilities of enterprises, forest restoration, and political advocacy for the defense of indigenous rights.

“Events like this are important for Indigenous Peoples, for the protection of their territories, the environment, and biodiversity conservation, but globally, for the whole world. This is a struggle that Indigenous Peoples face every day,” said Ted Gehr, director of USAID/Brazil.

“It’s important that we share the knowledge generated at this event. It’s exciting for me because we’ve been through the same situation in our history, and they have been living it nowadays,” said Robert Romero, indigenous leader from Pueblo Laguna, New Mexico, and representative of the Native American Fish and Wildlife Society (NAFWS).

The strategies used by Brazilian and North American indigenous peoples to address the challenges were shared by forest guardians, brigades, environmental agents, academics, researchers, and leaders engaged in the defense of the territories. The indigenous protagonism in the management and territorial protection and the fundamental role of the Indigenous Peoples and Lands in biodiversity conservation and respect for and recognition of ethnic diversity were highlighted.

A marine biologist fromTolowa Dee-ni’ Nation also shared data on how her community in the U.S. worked directly with officials from the state of California, USA, to collect basic data and monitor trends on priority species and their related habitats; expand habitat restoration efforts; and support a local fish incubator. With these joint efforts, the environment around the Smith River Plain remains the primary provider of sustenance and well-being for the people of Tolowa Dee-ni’, who are the original stewards of the region’s natural resources.

“The “Indigenous Dialogues on Brazil-U.S. territorial protection” represented an unprecedented experience. It was the first time that Native American leaders came to Brazil to participate in a meeting involving a significant set of Indigenous Lands to discuss such a complex and important issue. The exchange of information was extremely rich and productive, explaining the immense diversity of situations of the Indigenous Lands of Maranhão and Tocantins, as well as the situations of the Indigenous Lands of the USA, very different from the Brazilian realities”, commented Jaime Siqueira, the executive coordinator of CTI.

The event was held by CTI in partnership with the Wyty Catë Association of the Timbira Communities of Maranhão and Tocantins, Coordination of Organizations and Articulations of Indigenous Peoples of Maranhão – COAPIMA, Articulation of Indigenous Women of Maranhão – AMIMA, NAFWS, Instituto Sociedade População e Natureza – ISPN, with the support of the United States Agency for International Development – USAID, USFWS, Department of State and the International Technical Assistance Program of the U.S. Department of the Interior (DOI/ITAP).