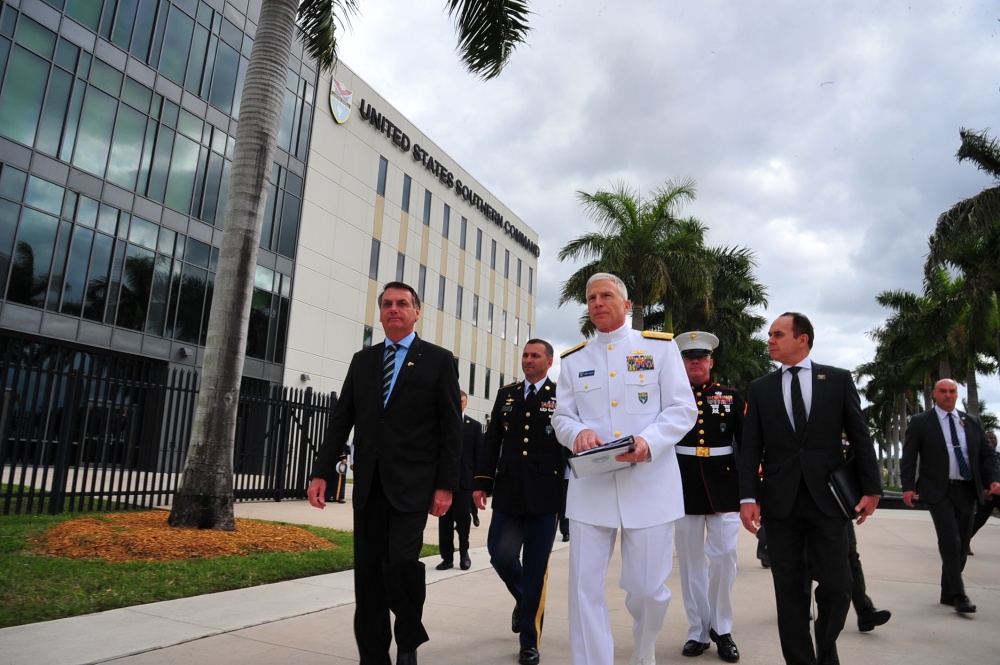 “It was an honor to welcome President Bolsonaro and the distinguished delegation from Brazil to our headquarters and to speak with him about the growing defense ties between our nations,” said U.S. Navy Adm. Craig Faller. “Brazil is one of our strongest democratic partners in the hemisphere. We value our longstanding partnership with Brazil’s armed forces, and we look forward to taking new and important steps to expand our military cooperation.”

While Bolsonaro was at the headquarters, the U.S. and Brazil signed a bilateral agreement on Research Development, Test and Evaluation Projects that will expand opportunities for both countries to collaborate and share information on the development of new defense capabilities.

The agreement paves the way for potential future cooperation on applied research, development of emerging technologies, analysis, operational studies, demonstrations, and the testing and evaluation of prototypes.

The U.S. and Brazilian armed forces enjoy longstanding ties, and defense cooperation between them includes a wide range of partnership activities, such as exercises, training, counter-proliferation and counter-narcotics cooperation, humanitarian assistance, reciprocal visits, personnel exchanges, and the sharing of information and expertise.

In 2019, Brazil hosted the Atlantic and amphibious phases of UNITAS, the world’s longest running, multinational maritime security exercise. The U.S. has sponsored UNITAS for six decades, and Brazil was among nine nations that participated in the first iteration of the exercise in 1960.

Earlier in the year, Brazil signed a partnership declaration with the New York National Guard, joining more than 80 nations participating in the State Partnership Program with the U.S.

Brazilian medical professionals helped treat and care for patients when the U.S. Navy hospital ship USNS Comfort deployed to the region for medical assistance missions in 2018 and 2019.

Brazil’s contributions to global security date back more than a century. During World War II, Brazil supported allied naval operations in the Atlantic and deployed an expeditionary force to Italy. In World War I, Brazil’s armed forces conducted convoy operations and security patrols with allied nations.

Today, the Brazilian armed forces’ legacy as a committed security partner continues to grow as they take on new leadership roles promoting security cooperation, building regional capacity, and supporting security and stability in the Western Hemisphere and beyond.

SOUTHCOM is one of the nation’s six geographically-focused unified commands with responsibility for U.S. military operations in the Caribbean, Central America and South America, as well as security cooperation with defense and public-security forces in the region.