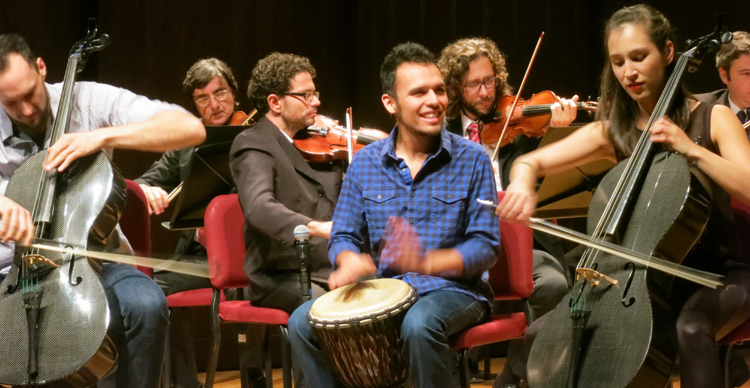 New York-based Rock/classical fusion band Break of Reality (Patrick Laird, Meta Weiss and Andrew Janss – celli; Ivan Trevino – percussion) performed sold-out concerts in Rio de Janeiro with the Brazilian Symphony Orchestra (OSB), led by U.S. conductor Lee Mills.  On August 11, the quartet played a mix of American and Brazilian music accompanied by a small group OSB string players, to an audience of 400 that packed Cidade das Artes’ Chamber Music Hall.  On the following day, Patrick Laird’s Concerto for Break of Reality and Orchestra received its Latin American première at Sala Cecília Meireles, in a full symphony orchestra concert that also featured works by U.S. composers Charles Ives and John Adams, as well as Antonín Dvořák’s New World Symphony, which the Czech composer wrote while he was living in the United States.  The 800 members of the audience gave a standing ovation to the New York band.  The two concerts were part of the Rio450 cultural calendar, with Break of Reality’s participation developed as a special gift from the U.S. Consulate General to the 450th anniversary of the city.

In addition to the Concerto, Break of Reality’s biggest hits in Rio were Laird’s arrangement for three celli and percussion of “Aria” from Heitor Villa-Lobos’ Bachianas Brasileiras No. 5, Brazil’s most iconic classical music composition, and Break of Reality’s arrangement of the theme song from HBO’s Game of Thrones, hailed by Huffington Post as “the best rendition of the theme song you will ever hear (…).”  The Brazilian Symphony Orchestra filmed a short video on the spot of Game of Thrones at Cidade das Artes which, as soon as the concert was over, had already more than 1,300 views on Facebook.  In addition to the concerts, on August 10, Break of Reality gave a workshop on rock improvisation based on riffs to 100 music students from Villa-Lobos Music School (20 participants with instruments plus 80 students that attended the workshop as “listeners”).