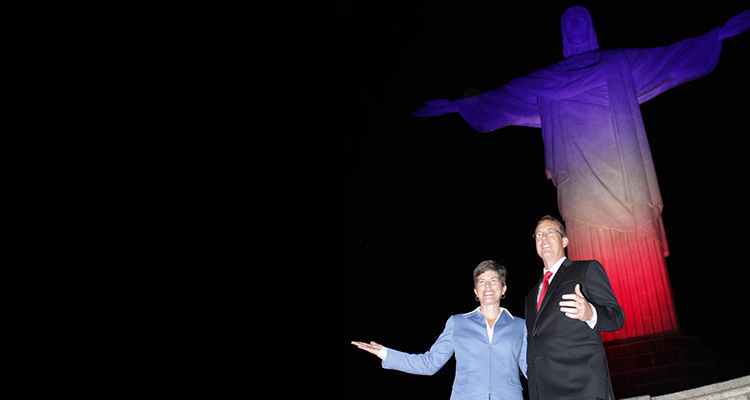 In celebration of July 4, Day of Independence of the United States, the Archdiocese of Rio de Janeiro once again lit the Christ the Redeemer monument, one of the most famous landmarks in the world, with the colors of the American flag. The tribute that marked the celebration of the 239th. U.S. Independence Anniversary, was attended by the new U.S. Consul General in Rio de Janeiro, James Story, and his wife, Susan Story, on Tuesday, 07 July.

The rector of the Sanctuary Christ the Redeemer, Father Omar Raposo, opened the doors of the shrine to the American Consul General, who recorded a special message to the “Carioca” public (natives from Rio de Janeiro’s city), marking the beginning of his diplomatic service in the city for the next three years: “At the feet of Christ the Redeemer, my wife Susan and I want to thank the Brazilians for welcoming my arrival in Rio and for the homage of the Marvelous City to my country. ” Story also stated that it is a privilege to be the U.S. Consul General in Rio during the Olympic and Paralympic Games in 2016. “Rio will stage an unforgettable tournament and Brazil will be in my heart and in the hearts of thousands of Americans who will visit the city.”