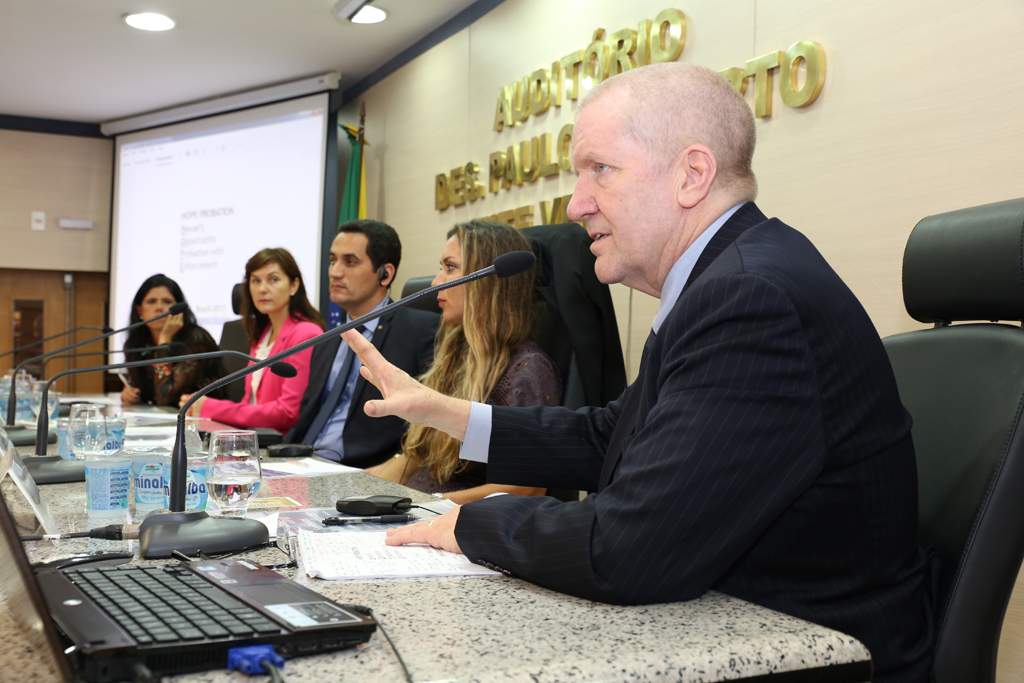 Rio de Janeiro – During a Oct. 1-6 visit to Brazil, a U.S. speaker, Judge Steven Alm, engaged with state and federal judges, prosecutors, and law students presenting the Hawaii’s Opportunity Probation with Enforcement (HOPE) program that he developed in 2004.  The HOPE model have been successful in lowering the cases of recidivism in over 30 U.S. state courts.  In Vitoria, Espírito Santo, Judge Alm had the opportunity to observe a collective alternative sentencing hearing noting procedural similarities to the U.S. program.

At the Espírito Santo State Court (TJES) Judge Alm was a guest of honor at a very special ceremony of transferring court funds to social philanthropic institutions that work with the court on alternative sentencing community projects.  At the Magistrate School in Rio de Janeiro, the panel discussion with state judges was focused on the possible ways to apply the HOPE model in juvenile courts.  During the program in Rio de Janeiro, Judge Alm engaged in discussions with judges, prosecutors and law students at several institutions, including the School of the Rio de Janeiro Prosecutors Office (FEMPERJ) and Estácio de Sá Law School.  Several of former participants of U.S. exchanges participated in the program that created an opportunity to compare judicial and law enforcement experiences in the United States and Brazil.

Steven S. Alm was sworn in as a First Circuit judge on May 14, 2001 and has been assigned to the criminal division ever since.

Judge Alm is the creator of the Hawaii’s Opportunity Probation with Enforcement program*, or HOPE Probation. This successful program, the first of its kind in the nation, imposes proportionate jail time swiftly and with certainty as a sanction for a positive drug test or other probation violations. An independent study of offenders in HOPE – the majority of whom are felony drug offenders at high risk of recidivism – showed that HOPE probationers did far better than members of a control group in regular probation. Judge Alm also presides over the First Circuit’s Adult Drug Court program, an assignment he assumed in March 2011. He chairs the Corrections Population Management Commission and is a co-chair of the Interagency Council on Intermediate Sanctions.  He was named the 2010 Jurist of the Year by Hawaii Supreme Court Chief Justice Mark Recktenwald. Prior to his judicial appointment, Judge Alm served as the United States Attorney for the District of Hawai`i from 1994 until 2001. From 1985 to 1994, Judge Alm served as Deputy Prosecuting Attorney for the City and County of Honolulu. During that time, he served as a Felony Team Supervisor and as Director of the District and Family Court division and personally handled complex homicide cases.  Judge Alm received his law degree from the University of the Pacific’s McGeorge School of Law and his Master’s degree in Education from the University of Oregon.