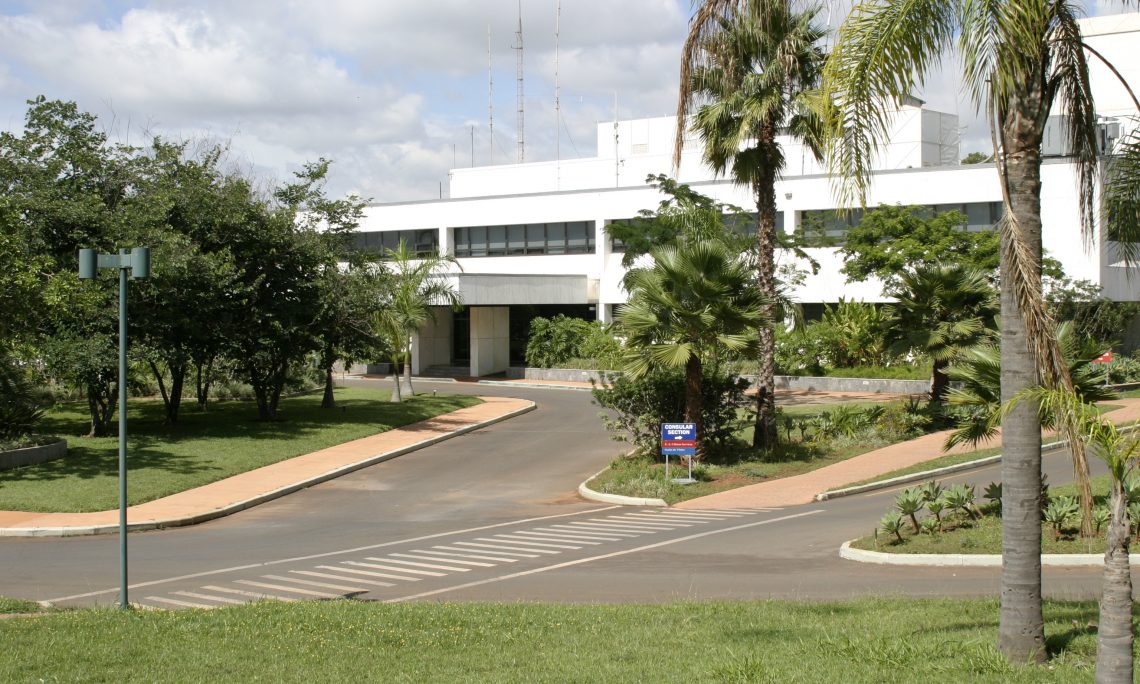 The United States was the first nation to establish a consulate in Brazil in 1808, following the transfer of the Portuguese royal court to Rio de Janeiro and the subsequent opening of the ports to foreign ships. However, it was not until after World War II that the United States became Brazil’s number-one trading partner and foreign investor.

The United States was also the first country to recognize Brazil’s independence in 1822. The two countries have traditionally enjoyed friendly, active relations encompassing a broad political and economic agenda. Deepening U.S.-Brazil engagement and cooperation are reflected in high-level contacts between the two governments.

The U.S. Embassy in Brasilia

The United States Embassy was the first to be established in Brasília. The Embassy site, which was donated by the Brazilian Government, was officially selected by Secretary of State John Foster Dulles when he visited Brasília in 1958 in the company of President Kubitschek. The site was first occupied in 1960 by a portable house trailer. President Eisenhower laid the symbolic cornerstone of the Embassy Chancery during his visit to Brazil on February 23, 1960.

The Embassy officially opened for business in the Brasília Palace Hotel early in 1960 and moved to the “provisional” Chancery in March 1961. Officially inaugurated in April 1961, the original chancery building was designed by the U.S. firm of McLeod and Ferrera.

Construction of the expanded chancery building began in 1972. Designed by U.S. architects and engineers Henningson, Durham, and Richardson, the two-story structure features simple modern lines with a facade of white Vermont marble. Roberto Burle Marx planned the landscaping for the Embassy courtyards as well as the garden area in front of the Embassy.

The many agencies of the United States Government that constitute the Mission work as a team to advance American interests and promote relations between the American and Brazilian government and people. The U.S. embassy and consulates in Brazil provide a wide range of services to U.S. citizens and business. Political, economic, and science officers deal directly with the Brazilian Government in advancing U.S. interests but also are available to brief U.S. citizens on general conditions in the country. Attachés from the U.S. Commercial Service and Foreign Agriculture Service work closely with hundreds of U.S. companies that maintain offices in Brazil. These officers provide information on Brazilian trade and industry regulations and administer several programs to aid U.S. companies starting or maintaining business ventures in Brazil. The number of trade events and U.S. companies traveling to Brazil to participate in U.S. Commercial Service and Foreign Agriculture Service programs has tripled over the last three years.