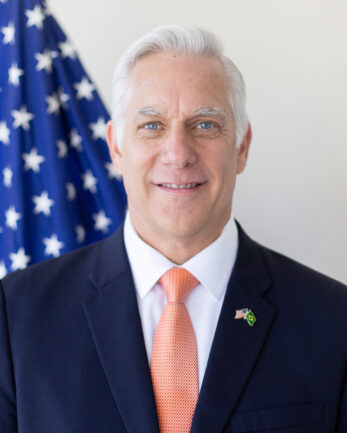 Douglas Koneff is currently the Chargé d’Affaires, a.i. of Mission for the U.S. Mission in Brazil, a six-post, 1400-person Mission.

Prior to his assignment as Deputy Chief of Mission, Mr. Koneff was the Office Director for the Bureau of Western Hemisphere Affairs, Brazil and Southern Cone.

Doug Koneff has also served as Minister Counselor for Consular Affairs for the U.S. Mission Brazil. He has also served as the Deputy Chief of Mission at the U.S. Embassy in Quito, Ecuador, managing the activities of 9 U.S. Government agencies and nearly 400 staff in both Quito and its constituent post, Consulate General Guayaquil. From 2011 to 2014, he served as the Deputy Principal Officer at the U.S. Consulate General in Ciudad Juarez, Mexico.

Between 2009 and 2011, Mr. Koneff was the Deputy Executive Secretary on the National Security Staff in Washington, D.C. He has also served in the Executive Secretariat as the Department’s Crisis Management Coordinator, the Director of American Citizens Services and Crisis Management, a Watch Officer and Senior Watch Officer in the Department’s Operations Center, and a Special Assistant (Line Officer) to Secretaries of State Albright and Powell. His overseas assignments include U.S. Embassy Jakarta, Indonesia, where he was the Deputy Economic Counselor, and U.S. Embassy Santiago, Chile, where he was the political-military officer and Nonimmigrant Visa section chief. Mr. Koneff’s first Foreign Service assignment was also on the Mexican border, serving as a Vice Consul in Matamoros, Tamaulipas.

Prior to joining the Foreign Service, Mr. Koneff was a Naval Flight Officer in the U.S. Navy, flying P-3 and EP-3 aircraft in the Pacific and European theaters. He is a graduate of Cornell University, where he received a Bachelors degree in International Relations, and the Defense Intelligence College in Washington, D.C., where he received a Masters degree in Strategic Intelligence.