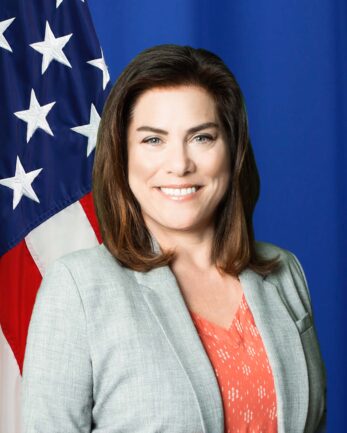 Jessica Simon is the Consul General at the U.S. Consulate General in Recife, Brazil since September 2020.

A career Foreign Service Officer with the U.S. Department of State, Ms. Simon previously served as Press Attaché for the U.S. Embassy in Mexico City; Public Affairs Officer at U.S. Consulate General Rio de Janeiro; in Washington as Deputy Director of Communications in the Office of the Special Representative for Afghanistan and Pakistan, as Special Assistant to the Assistant Secretary in the Public Affairs Bureau, and as a Pearson Congressional Fellow.  Ms. Simon also served overseas at the U.S. Embassies in Tel Aviv, Israel and Kabul, Afghanistan.

An Oregon native, Ms. Simon holds a B.A. in psychology from Tufts University, and a master´s degree in international relations from Georgetown University. She speaks Portuguese, Spanish, Hebrew, and some Dari. Prior to joining the Department of State, Ms. Simon worked as a program officer in the Washington office of Partners of the Americas, and as an English teacher with the WorldTeach program in Costa Rica.  She and her Brazilian-born husband Frederico, have daughter and a son.