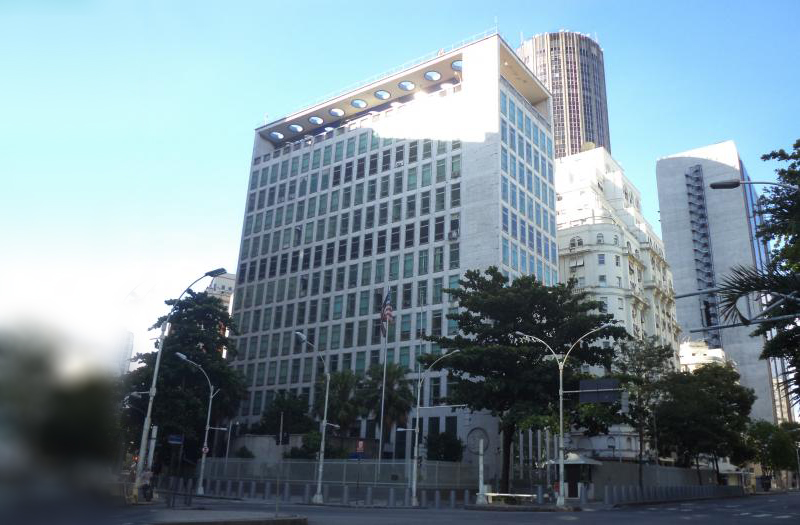 The Consulate General of the United States of America in Rio de Janeiro was established in November, 1971, when the Embassy was transferred to Brasília. Headed by a Consul General, the office is responsible for a broad range of consular and commercial functions and for coordination of United States Government activities in its Consular District, which covers the states of Rio de Janeiro, Espírito Santo and Bahia. The Consular Section has also consular jurisdiction over this region in Brazil. However, most applicants can now apply for a non-immigrant visa at any Consulate or the Embassy in Brazil, regardless of where they live in the Country.

History of the Building

The U.S. Consulate General in Rio is housed in the same building that was once the U.S. Embassy, before the Brazilian capital moved from Rio de Janeiro to Brasilia. The 13-story building, constructed in 1952, is located at Avenida Presidente Wilson, 147 Castelo in downtown Rio de Janeiro.

Following World War II, the U.S. government’s need for foreign office space soared, so the State Department’s Office of Foreign Buildings Operations (FBO) embarked on a vastly expanded building program. The FBO hired the architectural firm Harrison and Abramovitz, one of the most renowned firms in the United States, to design the new U.S. Embassy in Rio de Janeiro in 1952. The building was designed in this modern architectural style, which was seen as an expression of unique American ideals. The current building has thirteen floors, and, according to the Christian Science Monitor, “spells out the friendship of two widely separated countries in the mold of daring architecture, centralized air conditioning, stainless-steel window frames, and foam-glass insulation.” The building also has a beautiful view of Rio’s Flamengo Harbor. In 1960, when Brazil’s capital moved from Rio de Janeiro to Brasilia, the U.S. Embassy in Rio de Janeiro became the U.S. Consulate General.

News and Events of Rio