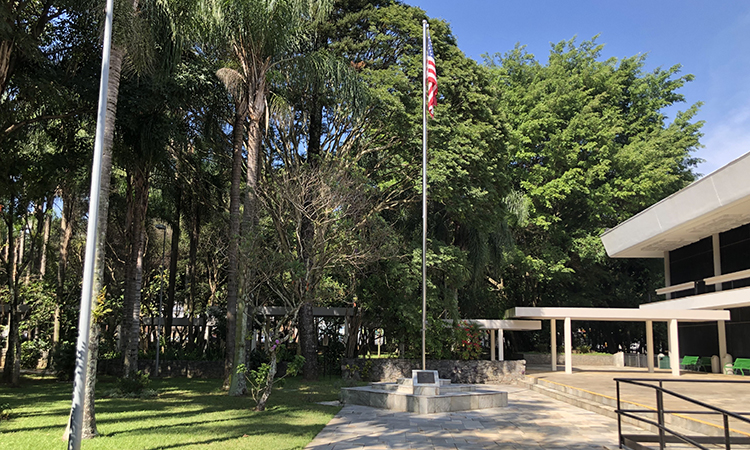 The U.S. Consulate General in Sao Paulo, as part of the U.S. Mission in Brazil seeks to protect the well-being of U.S. citizens, represent U.S. interests, promote better bilateral relations, and foster friendship between the people of our two countries.

History of the U.S. Consulate in Sao Paulo

Even in the early years of independence of the Brazilian Empire, the province of Sao Paulo was significant enough to draw American attention. While the still small provincial capital was isolated at the top of the Serra do Mar (mountains of the sea), its port city of Santos was more accessible. The first American Consulate in the future State of Sao Paulo was established in Santos on April 5, 1830 under Consul George Black. (The Santos Consulate was closed September 28, 1963.)  With the great coffee boom of the last decades of the 1800’s and new rail connections from Santos into the interior, Sao Paulo City began its explosive expansion. On April 10, 1907 an American resident in Sao Paulo, Albert J. Byington, originally from Kansas, was appointed Consular Agent. (According to his granddaughter, Byington was later the first American to become a Brazilian citizen in Sao Paulo.) Byington resigned January 30, 1908, and was replaced on June 18th by William W. Lee, a Brazilian citizen who served until March 5, 1914, taking care of consular business from his home in Rua Santo Amaro.

With a population already in the hundreds of thousands, and a similarly burgeoning economic connection with the United States, the City of Sao Paulo could not long be relegated to a secondary status by the Department of State. A Consulate was established on July 3, 1915, and Vice Consul Robert L. Keiser was appointed to head it.

In the years immediately after World War II, the Consulate occupied parts of two buildings in the old center city, at Largo Sao Francisco, 181, next to the Franciscan Church and Friary, and immediately adjacent at Rua Libero Badaro, 39.

From there, the Consulate moved to the Conjunto Nacional Building on Avenida Paulista, between Rua Padre Joao Manoel and Rua Augusta. A fire in September 1978 forced the Consulate to move temporarily to the quarters of the U.S. Trade Center further west on Paulista, until new quarters could be secure.

The Consulate moved to Rua Padre Joao Manoel, 933 and was inaugurated on November 19, 1979.

Due to an expanding staff, growing operations and a need to better serve the public, the Consulate moved to the southern part of the city in the Santo Amaro district.  The new facility opened on January 21, 2004 with all USG operations consolidated into this one location at Rua Thomas Deloney 381.