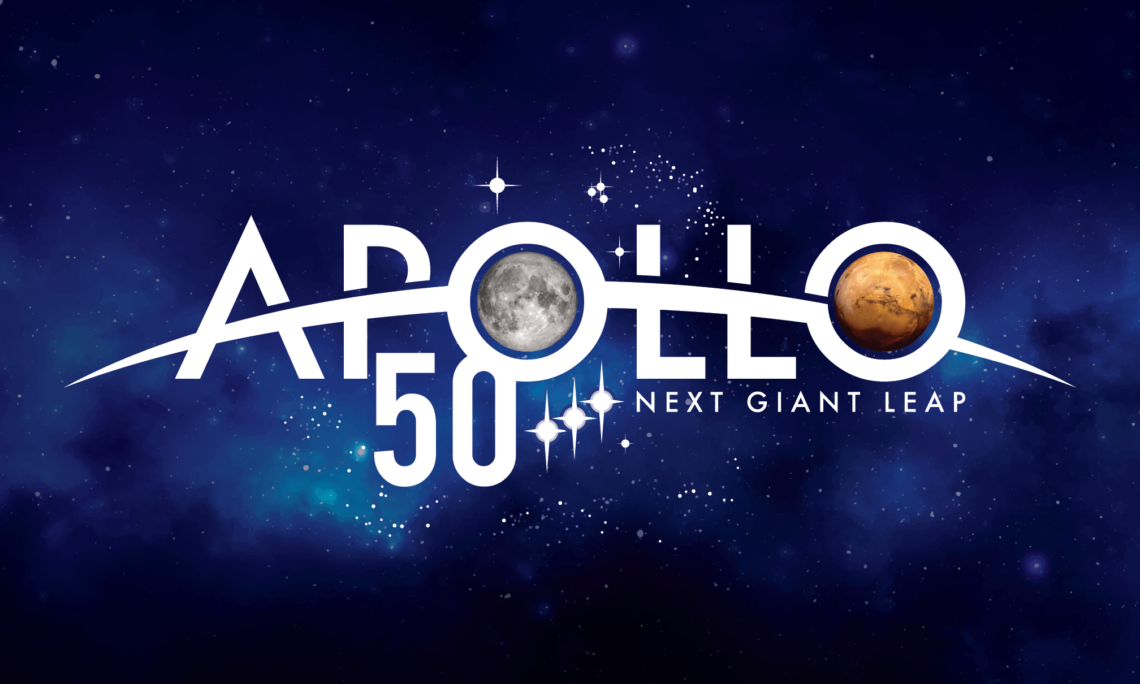 In Brazil, Lectures and NASA photos and videos tell the story of the Apollo missions

July 20 marks the 50 anniversary of the landing on the moon by the Apollo 11 mission astronauts Neil Armstrong, Buzz Aldrin and Michael Collins. The U.S. Embassy and Consulates in Brazil are promoting a series of activities in the country to celebrate this date that, five decades ago, caught the attention of the world and established a new threshold for science and the space industry.  The U.S. Embassy and Consulates are collaborating with Brazil’s Correios to launch a commemorative stamp on the journey of the man on the moon – courtesy of NASA, the classic photo of a footprint left behind on the moon – symbolically representing Neil Armstrong’s famous phrase: “One small step for man. One giant leap for mankind.” The Chargé d’Affaires, a.i., of the U.S. Embassy and Consulates, William Popp, says that, with these initiatives, the idea is to foster interest in science, technology, engineering, and mathematics: “Our expectation is to share this historic experience for all of humanity with the new generations, encouraging a greater curiosity in the scientific area.  Soon, we hope to see more Brazilians working in space careers along with their American counterparts. These activities aim to continuously strengthen the relations between the two countries, which share many values in common. “

In Brasilia, the Chargé d’Affaires, a.i., William Popp, will accompany Brazil’s Minister of Citizenship, Osmar Terra, during the movie screening “The First Man” organized by the Ministry with support from the Embassy.  On July 25 to 27, the Embassy will promote a series of events with the first mother to travel in space, Dr. Anne Fisher. She will speak and participate in roundtables about her work at NASA and the impact of women in the fields of science, technology, engineering, and mathematics. On July 31, the Chargé d’Affaires, a.i., William Popp, MCTIC’s Minister Marcos Pontes and Correio’s President Floriano Peixoto will launch the commemorative stamp of the man’s arrival on the Moon at the DF Planetarium. U.S. astronaut Anna Fisher will also be there.

In São Paulo, the U.S. Consulate General is sponsoring an exhibition at Professor Aristotle Orsini Planetarium at Ibirapuera Park entitled “Moon in sight: 50 years of the first step”, the event will be open from July 19 to 20.  During the event, there will also be the launch of the commemorative stamp. From July 28 to 30, the Consulate General will host events with Dr. Anne Fisher. Dr. Fisher will lecture at the Planetarium and at Catavento Museum, and will participate in roundtables with women in the fields of science, technology, engineering, and mathematics.

In Rio, the U.S. Consulate General and the Rio Planetarium will open at 14h30 on July 20, the exhibition entitled “A gigantic leap: the journey to the moon” that gathers photos, illustrations and videos from the NASA archives on the trajectory of the Apollo missions to the successful moon landing on July 20, 1969.  There will also be the launch of Correios’ commemorative stamp. The exhibition will be open to the public for a year. In July and August, movies on the timeline of space exploration will be screened followed by discussions with astronomers and researchers on space missions.

In Porto Alegre, from July 15 to 19, a thematic exhibition entitled “A small step for man, a giant leap for mankind – celebration of the 50 anniversary of the moon landing,” will be displayed at the Astronomical Observatory of PUCRS.  Visiting hours: from 18h to 22h. The initiative, with the support from the U.S. Consulate General in Porto Alegre, integrates the program of one of the greatest achievements in the history of mankind and from which several benefits for everyday life have taken place.  At the venue, materials and curiosities of the years 1960/1970 and the observation of the Moon with telescopes will be available to the visitors. The exhibition is free of charge. On July 19, the eve of the 50th anniversary, there will be a documentary of the moon landing.  The event will take place in room 601 – building 8 of PUCRS Campus: Av. Ipiranga, 6681.  More information on the event: (51) 3353-4436 (from 17h).

In Belo Horizonte, the U.S. Consul, Rita Rico, will participate in the ceremony launching the stamp commemorating the landing of humanity on the moon. The ceremony will take place on July 20th at 18h30, at the UFMG’s Knowledge Space Planetarium. The stamp launch will be hosted by Correios in partnership with the Federal University of Minas Gerais (UFMG) and will be part of the Virada Cultural activities in the state capital, that since 2013 has promoted art and culture in Belo Horizonte, and it will be part of the UFMG’s Winter Festival, which also includes other activities in commemoration of the 50th anniversary of the moon landing such as night observation, thematic karaoke, and exhibitions in the Planetarium.