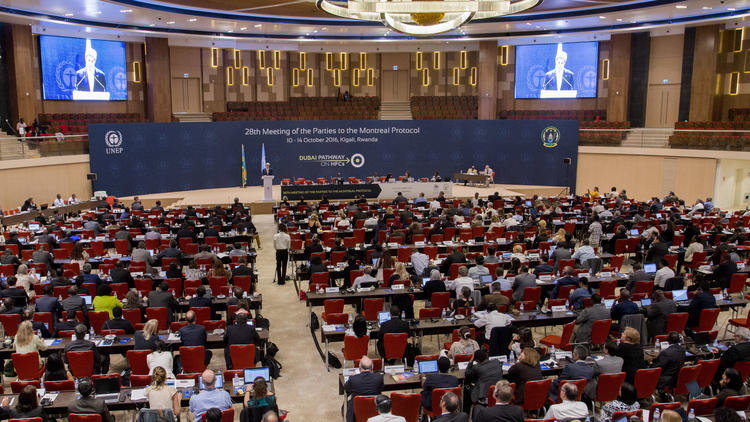 Today, in another major milestone for international climate action, nearly 200 countries reached an agreement to phase down the potent greenhouse gases known as hydrofluorocarbons (HFCs). At the 28th Meeting of the Parties to the Montreal Protocol in Kigali, Rwanda, countries adopted an amendment to phase down HFCs, committing to cut the production and consumption of HFCs by more than 80 percent over the next 30 years.  This global deal will avoid more than 80 billion metric tons of carbon dioxide equivalent by 2050 – equivalent to more than a decade of emissions from the entire U.S. economy – and could avoid up to 0.5°C of warming by the end of the century.  It reflects a significant contribution towards achieving the Paris Agreement goal to limit global temperature rise to well below 2°C.  Today’s accomplishment follows years of engagement and leadership by the Obama Administration and our partners towards adopting an amendment and provides further momentum to global efforts to address climate change.

The Montreal Protocol is the international agreement designed to protect the ozone layer by phasing out the production and consumption of numerous substances that are responsible for ozone depletion, many of which are also potent greenhouse gases, and it is considered by many to be the most successful environmental treaty in history.  While the Montreal Protocol successfully phased out ozone-depleting substances and put the ozone layer on the path to a full recovery, it led to a shift towards HFCs.  Like the substances they replaced, HFCs are potent greenhouse gases that can be hundreds to thousands of times more potent than carbon dioxide in contributing to climate change.  HFCs are used in numerous applications, including refrigeration and air conditioning.  As safer chemicals continue to be developed, they can replace HFCs in these uses.  If left unchecked, global HFC emissions could grow to be equivalent to 19 percent of total carbon dioxide emissions in 2050 under a business-as-usual scenario.  However, today’s amendment will prevent that from happening by ensuring that countries begin to phase down HFCs starting in 2019, with subsequent reductions on a clear timeline that will lead to more than an 80 percent reduction in HFCs globally by 2047.

Key Elements of the Montreal Protocol Amendment to Address HFCs

Today’s amendment builds on strong action on HFCs that the United States has already taken domestically.  Notably, the U.S. Environmental Protection Agency (EPA) has finalized two rules under its Significant New Alternatives Policy program to prohibit the use of certain HFCs where safer and more climate-friendly alternatives are available.  In parallel, EPA has also listed as acceptable additional climate-friendly alternatives to expand the options for businesses to use, and has finalized a rule that strengthens existing refrigerant management rules for ozone-depleting refrigerants and applies those same requirements to HFCs.  In addition, the White House has held two summits at which private-sector commitments to reduce the use and emissions of HFCs were announced.  Taken together, the private-sector commitments and executive actions announced to date will slash U.S. reliance on HFCs and reduce cumulative global consumption of these greenhouse gases by the equivalent of more than 1 billion metric tons of carbon dioxide equivalent through 2025.