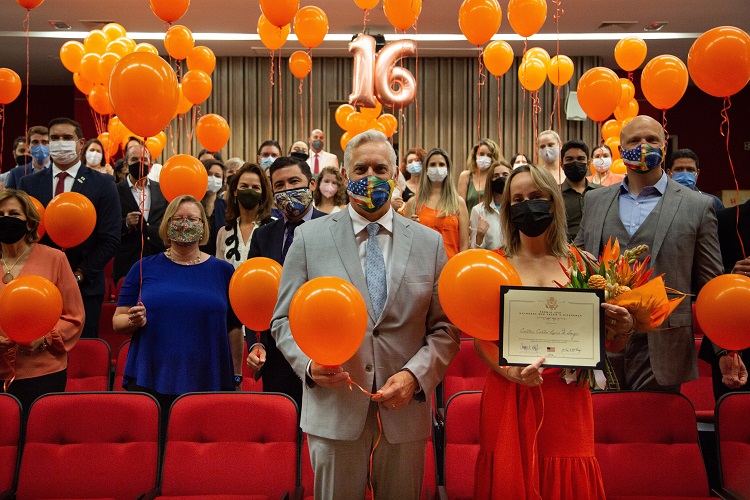 The award from the U.S. Embassy in Brasília was presented at a ceremony commemorating the end of the campaign “16 Days of Activism against Gender-Based Violence”

Brasilia, December 10, 2021: This morning thee U.S. Embassy held an event commemorating the global campaign “16 Days of Activism against Gender-Based Violence”, that encourages individuals and organizations around the world to call for the prevention and elimination of violence against women and girls.

At the event, Dr. Cristina Castro, CEO of the Gloria Institute, was awarded the “Brazilian Women Making a Difference” award – a program conducted by the U.S. Embassy that honors prominent women in Brazilian society.

The Chargé d’Affaires of the U.S. Embassy, Douglas Koneff, took part in the event and presented the award to Dr. Castro. “Preventing and responding to all forms of gender-based violence (GBV) is a cornerstone of the U.S. government’s commitment to promoting democracy, advancing human rights, and furthering gender equality,” he noted at the award ceremony.

According to Dr. Castro, “this award confirms that I am moving in the right direction. The fight against violence against women and girls, as well as the push for equal human rights, have been a long and intense journey. I am honored by this recognition. I thank the U.S. Department of State, through the U.S. Embassy and Consulates in Brazil, for their continued support for this cause. Many hands working together have made this possible.”

During the 16-day campaign, the U.S. Embassy and Consulates sponsored a series of activities in the effort to achieve gender equality. The study “Beyond Cyberbullying: Real Violence in the Virtual World” was launched publicly, and the Embassy supported a series of lectures with themes including “Domestic violence and abusive relationships,” “Powerful women against gender violence,” and a workshop focused on female entrepreneurship.