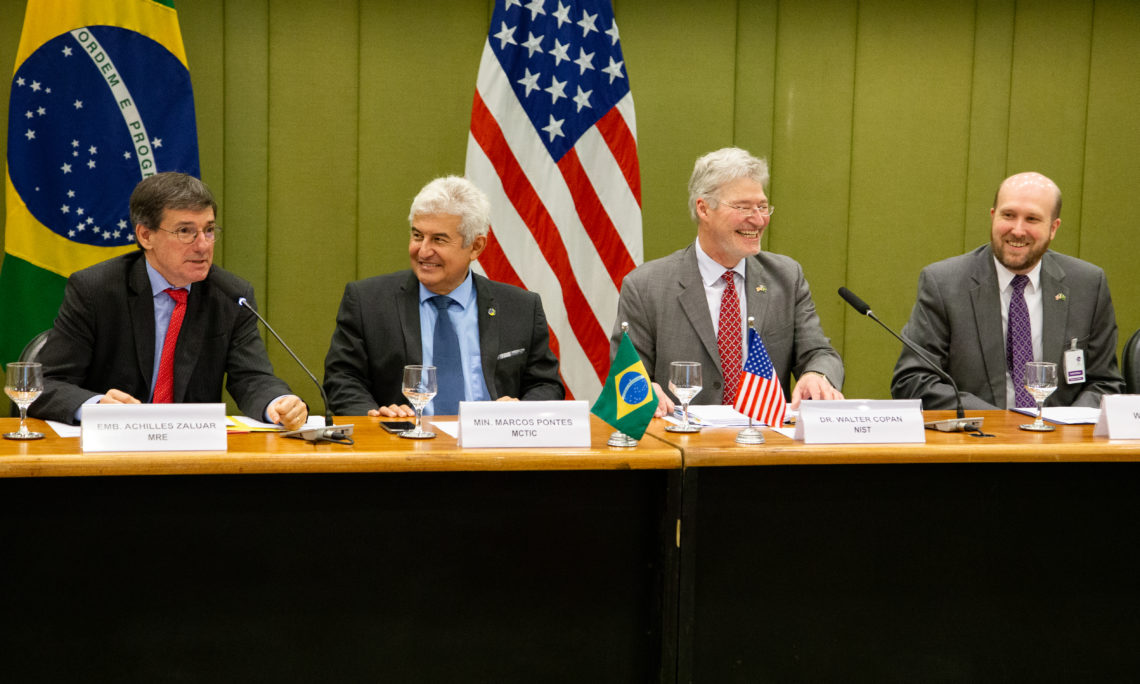 On March 5-6, 2020, Brazil and the United States held the Fifth Meeting of the Brazil-U.S. Joint Commission on Science and Technology Cooperation in Brasilia to deepen collaboration in key priority areas for the benefit of both countries.  Marcos Pontes, Minister of Science, Technology and Innovation, and Dr. Walter Copan, Director of the National Institute of Standards and Technology, chaired the meeting, which featured bilateral working group discussions on topics ranging from Earth observation and science, technology, engineering, arts and mathematics (STEAM) fields to advanced manufacturing and particle physics research.

During the Commission, the delegations from the United States and Brazil adopted a working plan to enhance already excellent cooperation in STEAM.  FAPESP and Fermilab signed an MOU to deepen scientific and technical cooperation in High Energy Physics and UNICAMP and Fermilab also signed an I-CRADA for the state-of-the-art LBNF cryogenics system.  The Brazil-U.S. Science and Technology Agreement entered into force in 1986 and established the Brazil-U.S. Joint Commission on Science and Technology Cooperation. The U.S. and Brazil delegations issued a Joint Statement highlighting the cooperation discussed and developed during the meetings.

White House Office of Science and Technology Policy Director Dr. Kelvin Droegemeier stated: “I am looking forward to hearing more about the delegation’s conversations with Brazil on the research environment and discussing shared values and collaboration between our science communities, and building upon these fruitful conversations to strengthen an already welcoming relationship.”

During his remarks at the opening of the Joint Commission meeting, Dr. Walter Copan said that “the Trump administration recognizes that actions taken today to strengthen research and development will pave the road ahead.  Our partnership with Brazil is vital to develop solutions for safety, health, and economic security for both nations. I look forward to the many ways that the U.S. and Brazil will continue to enhance our strong science and technology relationship!”