Home Home / News & Events / I Am Proud of Our Diplomacy 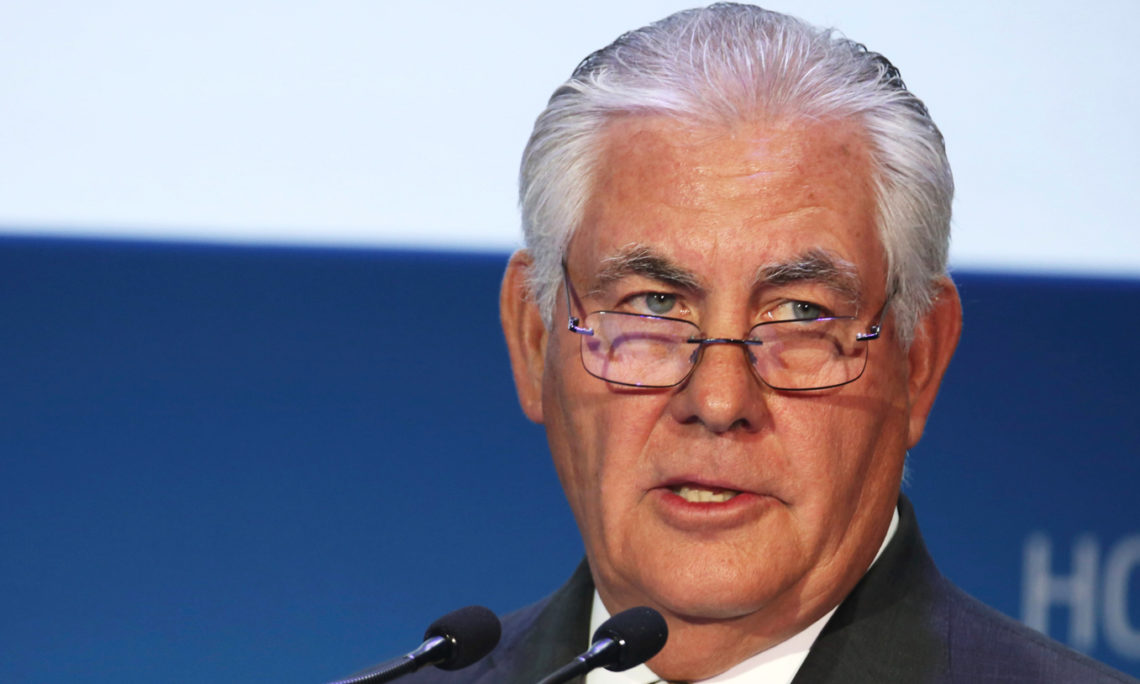 Over the past year, the United States has faced immense challenges in its dealings with North Korea, China and Russia, and in its efforts to defeat international terrorism. But Americans should be encouraged by the progress the State Department and United States Agency for International Development have made in pushing for global peace and stability.

When President Trump took office, he identified North Korea as the United States’ greatest security threat. He abandoned the failed policy of strategic patience. In its place we carried out a policy of pressure through diplomatic and economic sanctions. This year, the United Nations Security Council unanimously adopted three of the strongest sanctions resolutions in history, including bans on a wide array of North Korean exports such as coal, iron, seafood and textiles.

The United States has asked allies and partners to exert unilateral pressure against North Korea in order to force the regime to change its behavior. Many have responded with positive steps like shutting down trade, severing diplomatic ties and expelling North Korean laborers. Our peaceful pressure campaign has cut off roughly 90 percent of North Korea’s export revenue, much of which is used to fund illegal weapons development.

We hope that this international isolation will pressure the regime into serious negotiations on the abandonment of its nuclear and ballistic missile programs. A door to dialogue remains open, but we have made it clear that the regime must earn its way back to the negotiating table. Until denuclearization occurs, the pressure will continue.

A central component of our North Korea strategy is persuading China to exert its decisive economic leverage on Pyongyang. China has applied certain import bans and sanctions, but it could and should do more. We will also continue to pursue American interests in other areas of our relationship, including trade imbalances, intellectual property theft and China’s troubling military activities in the South China Sea and elsewhere. China’s rise as an economic and military power requires Washington and Beijing to consider carefully how to manage our relationship for the next 50 years.

Defeating terrorism remains one of the president’s highest priorities. The administration’s aggressive strategy to counter the Islamic State delegates greater authority to American military commanders on the battlefield, giving our forces more freedom and speed to do what they do best, in partnership with indigenous fighting forces. As a result, the Global Coalition to Defeat ISIS has accelerated operations and has recaptured virtually all of previously held Islamic State territory in Iraq and Syria. While our military was helping clear Iraq and Syria of Islamic State forces, our diplomats were following up with humanitarian aid and assistance, such as clearing land mines, restoring water and power, and getting children back in school.

A commitment to stopping Islamist terrorism and extremism also motivated the administration’s decision to adopt a new South Asia strategy, which focuses on Afghanistan. That country cannot become a safe haven for terrorists, as it was in the days before the Sept. 11 attacks. Pakistan must contribute by combating terrorist groups on its own soil. We are prepared to partner with Pakistan to defeat terrorist organizations seeking safe havens, but Pakistan must demonstrate its desire to partner with us.

On Russia, we have no illusions about the regime we are dealing with. The United States today has a poor relationship with a resurgent Russia that has invaded its neighbors Georgia and Ukraine in the last decade and undermined the sovereignty of Western nations by meddling in our election and others’. The appointment of Kurt Volker, a former NATO ambassador, as special representative for Ukraine reflects our commitment to restoring the country’s sovereignty and territorial integrity. Absent a peaceful resolution of the Ukraine situation, which must begin with Russia’s adherence to the Minsk agreements, there cannot be business as usual with Russia.

While we are on guard against Russian aggression, we recognize the need to work with Russia where mutual interests intersect. Nowhere is that more evident than in Syria. Now that President Vladimir Putin has committed to the United Nations-backed Geneva political process for providing a new future for Syria, we expect Russia to follow through. We are confident that the fulfillment of these talks will produce a Syria that is free of Bashar al-Assad and his family.

Lastly, the flawed Iran nuclear deal is no longer the focal point of our policy toward Iran. We are now confronting the totality of Iranian threats. Part of this strategy entails rebuilding alliances with our partners in the Middle East, and in November we helped re-establish diplomatic ties between Iraq and Saudi Arabia. We will continue to work with our allies and with Congress to explore options for addressing the nuclear deal’s many flaws, while building a like-minded effort to punish Iran for its violations of ballistic missile commitments and its destabilizing activities in the region.

I am proud of what our State Department and Agency for International Development teams around the world have accomplished this year, and our progress will continue in 2018 and beyond. To that end, we have undertaken a redesign of the State Department to strengthen our teams’ ability to deliver on our mission.

Our redesign doesn’t involve simply shifting boxes on an organizational chart. Our changes must address root problems that lead to inefficiencies and frustrations. By making changes like streamlining our human resources and information technology systems, better aligning personnel and resources with America’s strategic priorities, and reforming duplicative processes, we are giving our people more opportunities to flourish professionally and spend more time confronting the global problems they have dedicated their careers to solving.

When I wake up each morning, my first thought is, “How can I and my colleagues at the State Department use diplomacy to prevent people around the world from being killed, wounded or deprived of their rights?” In spite of the challenges, I remain optimistic about the power of diplomacy to resolve conflicts and advance American interests. My confidence comes from the knowledge that our efforts are carried out daily by patriotic and dedicated State Department employees who make sacrifices to serve with patience and persistence and who, by advancing democratic values the world over, are protecting our citizens’ rights to life, liberty and the pursuit of happiness.