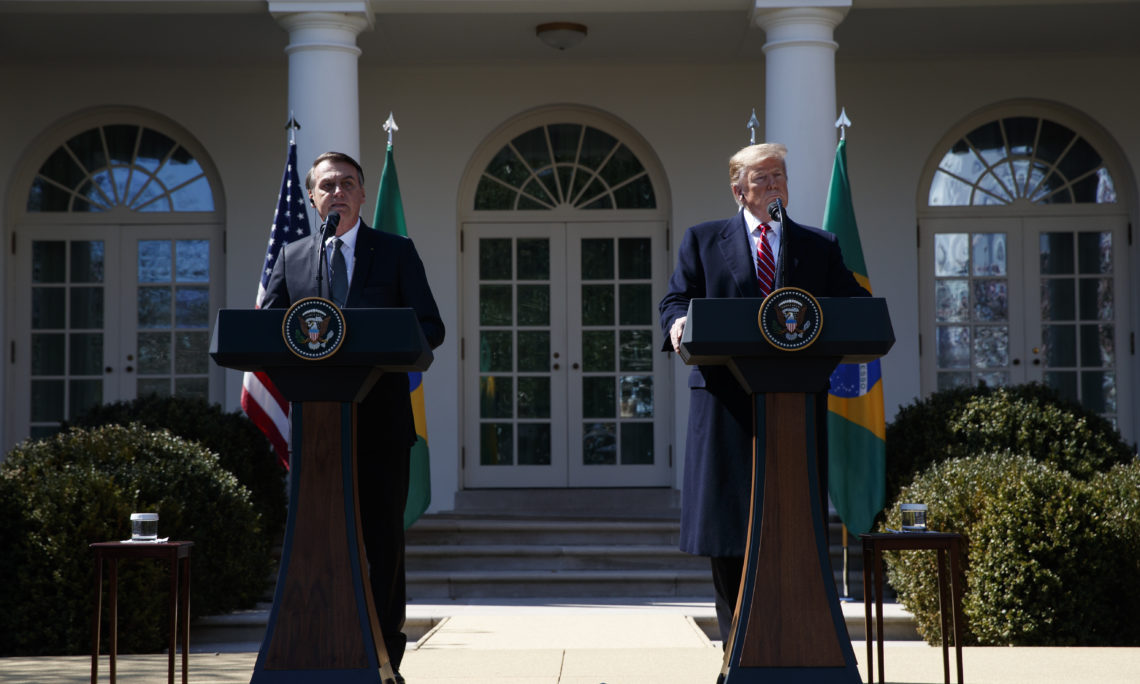 President Trump and President Bolsonaro reiterated that the United States and Brazil stand with the Interim President of Venezuela Juan Guaido, along with the democratically elected National Assembly, and the Venezuelan people, as they work to peacefully restore constitutional order to Venezuela.

President Trump announced the United States’ intent to designate Brazil as a Major Non-NATO Ally. The Presidents further welcomed the signing of a Technology Safeguards Agreement, which will enable United States companies to conduct commercial space launches from Brazil, as well as an agreement between the National Aeronautics and Space Administration and the Brazilian Space Agency to launch a jointly developed satellite in the near future.

The two leaders agreed to build a Prosperity Partnership to increase jobs and reduce barriers to trade and investment. To this end, they decided to enhance the work of the United States-Brazil Commission on Economic and Trade Relations, created under the Agreement on Trade and Economic Cooperation, to explore new initiatives to facilitate trade investment and good regulatory practices.

The two leaders also made a number of trade-related commitments. President Bolsonaro announced that Brazil will implement a tariff rate quota, allowing for the annual importation of 750 thousand tons of American wheat at zero rate. In addition, the United States and Brazil agreed to science-based conditions to allow for the importation of United States pork. In order to allow for the resumption of Brazil’s beef exports, the United States agreed to expeditiously schedule a technical visit by the United States Department of Agriculture’s Food Safety and Inspection Service to audit Brazil’s raw beef inspection system, as soon as it is satisfied with Brazil’s food safety documentation. The Presidents instructed their teams to negotiate a Mutual Recognition Agreement concerning their Trusted Trader programs, which will reduce costs for American and Brazilian companies.

The two leaders announced a new phase of the United States-Brazil CEO Forum, and welcomed the creation of a $100 million Biodiversity Impact Investment Fund that will catalyze sustainable investment in the Amazon region. As leaders of two of the fastest-growing energy suppliers in the world, the Presidents agreed to establish a United States-Brazil Energy Forum to facilitate energy-related trade and investment.

President Trump welcomed Brazil’s ongoing efforts regarding economic reforms, best practices, and a regulatory framework in line with the standards of the Organization for Economic Cooperation and Development (OECD). President Trump noted his support for Brazil initiating the accession procedure to become a full member of the OECD. Commensurate with its status as a global leader, President Bolsonaro agreed that Brazil will begin to forgo special and differential treatment in World Trade Organization negotiations, in line with the United States proposal. President Bolsonaro thanked President Trump and the American people for their hospitality.