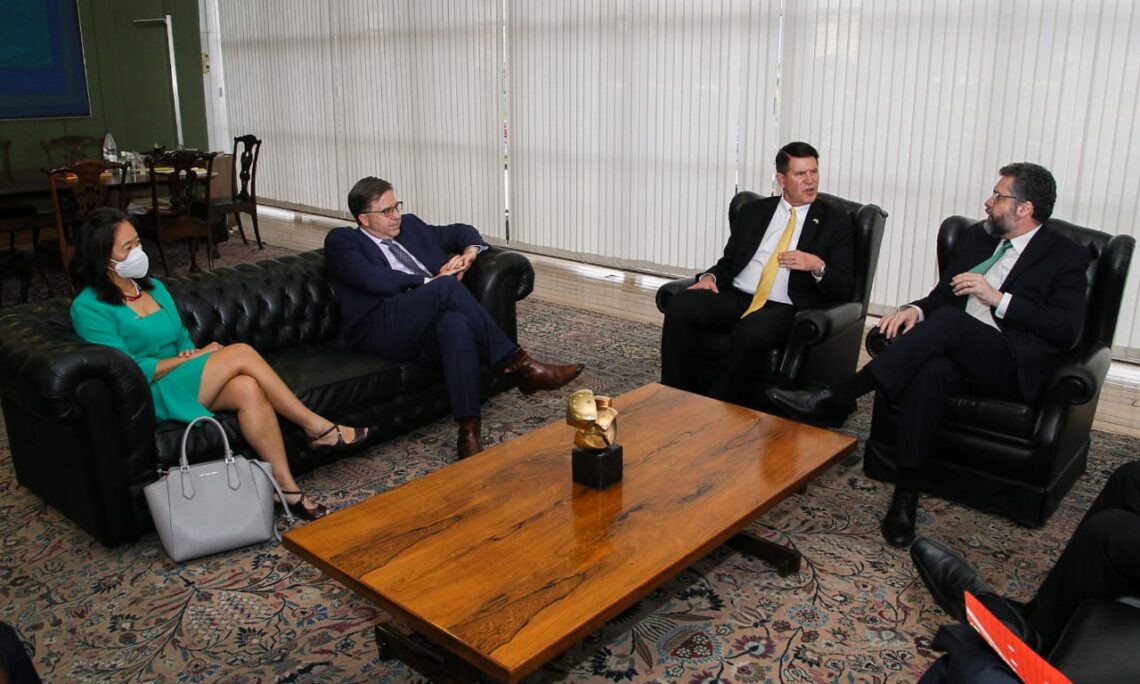 Joint Statement on the Japan-U.S.-Brazil Exchange

Brasilia, November 10, 2020: Today, the Governments of the United States of America, the Federative Republic of Brazil, and Japan launched the Japan-U.S.-Brazil Exchange in Brasilia, Brazil. The U.S. Under Secretary for Economic Growth, Energy, and the Environment, Keith Krach, led the U.S. delegation, Brazil’s Secretary for Bilateral Negotiations in Asia, the Pacific, and Russia, Ambassador Márcia Donner Abreu, led the Brazilian delegation and chaired the meeting, and Japan’s Assistant Minister and Director General for Latin America and the Caribbean, Ambassador Teiji Hayashi led the Japanese delegation. Brazil’s Minister of External Relations Ernesto Araujo opened the Exchange. The Japan-U.S.-Brazil Exchange will strengthen policy coordination on regional issues, pursue shared economic prosperity, and fortify democratic governance.

The statement below was released by the Governments of the United States of America, the Federative Republic of Brazil, and Japan on the occasion of the inaugural Japan-U.S.-Brazil Exchange, held in Brasilia, Brazil on this date.

Senior officials from Japan, the United States, and Brazil gathered to launch the Japan-U.S.-Brazil Exchange (JUSBE). Building upon the three countries’ traditional ties based on common values of freedom, human rights, democracy, and the rule of law, they aspire to a free and open international order where countries prosper side-by-side as sovereign and independent states.

Bearing in mind that the unprecedented COVID-19 pandemic calls for greater collective and coordinated actions, they unanimously and strongly reaffirmed their commitment to work together towards overcoming the crisis and shaping a new trajectory post-COVID-19.

Through the dialogue, officials from the three countries identified three pillars as the basis of JUSBE: strengthening policy coordination on regional issues, pursuing shared economic prosperity, and fortifying democratic governance. Noting that JUSBE is a results-oriented partnership, various concrete achievements were discussed under these pillars.

All three countries shared the view that regional peace and stability form the foundation of economic prosperity and democratic governance. To this end, as countries that share common values such as democracy and fundamental liberties, they will continue to exchange views on regional situations utilizing JUSBE, as well as existing bilateral dialogues, and work towards ensuring that our regions remain free and open under a rules-based order.

The three countries affirmed their commitment to ensure a secure, trusted, and vibrant communication network ecosystem and to develop a common approach to the deployment of transparent and secure 5G networks based on the foundation of free and fair competition, transparency, and the rule of law, in line with their national legislation, policy priorities and international obligations.

Democracy and good governance are essential foundations for economic prosperity, growth, and respect for human dignity, and help to ensure the protection of the most vulnerable populations in times of crisis. To this end, the three countries will strengthen dialogue and cooperation that fortifies democratic governance in their countries and at the international level, including securing free and fair elections, and guaranteeing freedom of expression and other fundamental liberties.