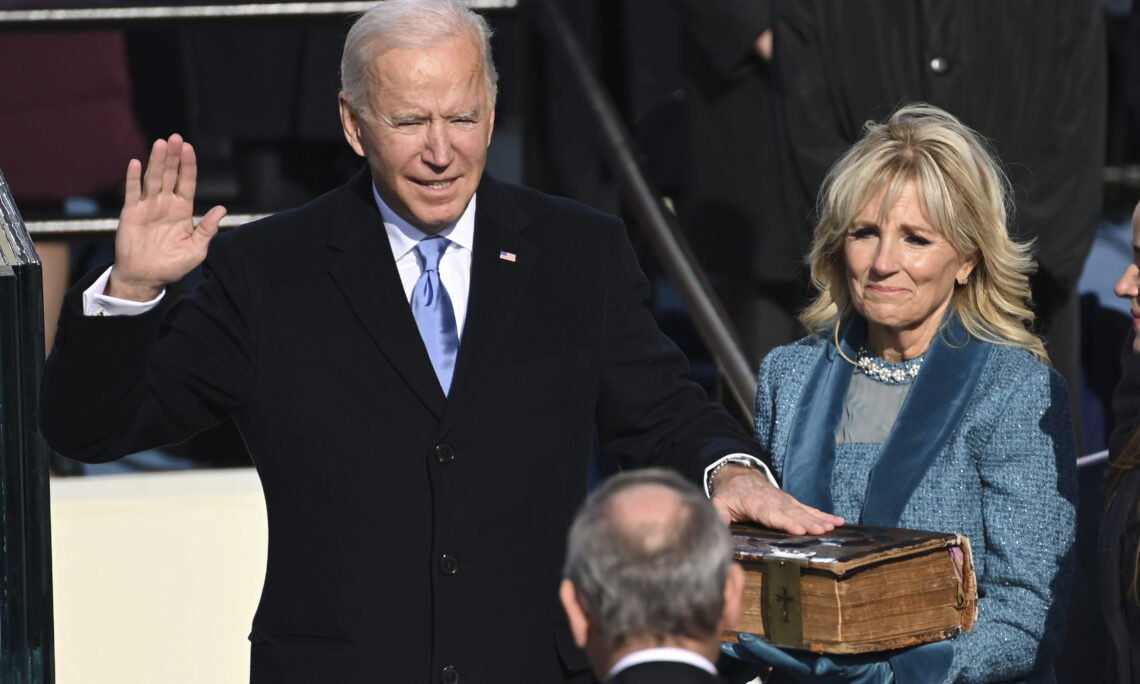 Joe Biden is sworn in as the 46th president of the United States by Chief Justice John Roberts as Jill Biden holds the Bible during the 59th Presidential Inauguration at the U.S. Capitol in Washington, Wednesday, Jan. 20, 2021.(Saul Loeb/Pool Photo via AP)

The audience for today’s ceremony was limited due to health precautions, but was attended by a number of former presidents and vice presidents of the United State, including Barack Obama, George W. Bush, Bill Clinton, Mike Pence, along with respective first ladies Michelle Obama, Laura Bush, and Hillary Clinton, among other former and current elected officials.

Roy Blunt, chair of the Joint Congressional Committee on Inaugural Ceremonies, served as the inauguration’s master of ceremonies, Georgia firefighters’ union leader Andrea Hall lead participants in the Pledge of Allegiance, Lady Gaga performed the national anthem, and Rev. Dr. Silvester Beaman concluded the ceremony with a benediction.  As has been the tradition at every presidential inauguration since Thomas Jefferson’s in 1801, “The President’s Own” United States Marine Band provided music for the swearing-in.  The ceremony was livestreamed and broadcast on nationwide television.

The Joint Committee on Inaugural Ceremonies, overseen by the U.S. Senate Committee on Rules and Administration, chose the inaugural theme “Our Determined Democracy: Forging a More Perfect Union” to highlight the inaugural ceremony as a “hallmark of American governance and democracy.”

Supreme Court Chief Justice John Roberts administered the oath of office to President Biden, who swore the oath on a Bible that has been in his family since 1893—the same one used during his senatorial and vice-presidential swearing in ceremonies.

The official inauguration ceremony is followed by a number of related activities, carefully planned to incorporate health and safety-related protocols to avoid the risk of COVID-19.

President Biden’s inaugural speech in full can be found at the following link: https://br.usembassy.gov/inaugural-address-by-president-joseph-r-biden-jr/