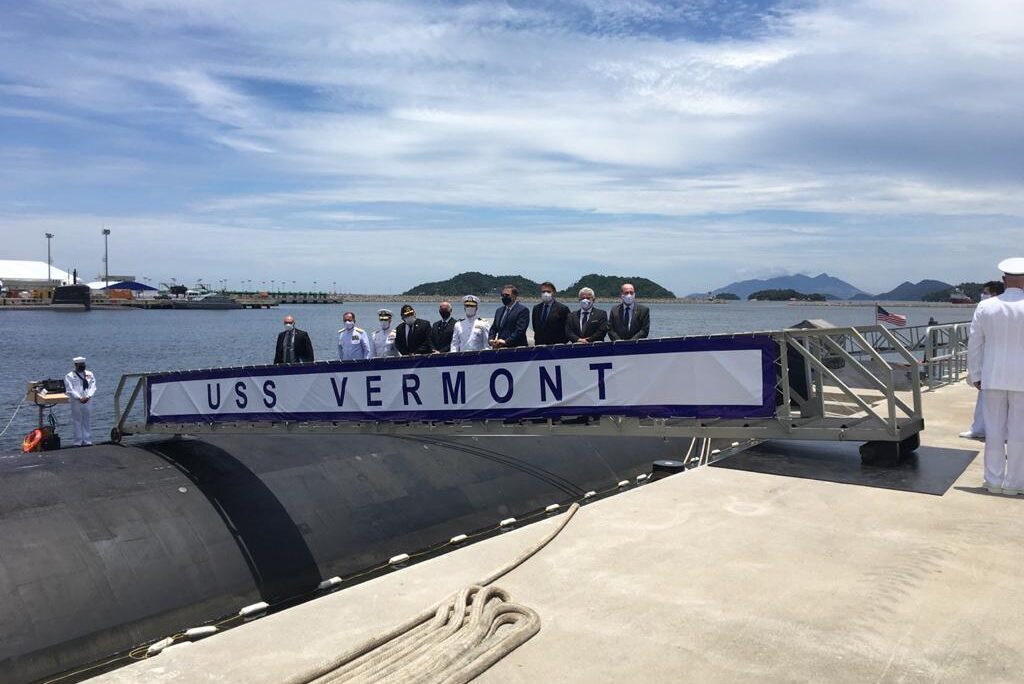 Ambassador Todd Chapman hosted President Jair Bolsonaro for a tour of the submarine, which stopped in Brazil to honor of the launch of the Brazilian submarine BNS Humaitá (S41)

Rio de Janeiro, December 11, 2020 – Coinciding with Dia Nacional do Marinheiro, the fast-attack submarine USS Vermont (SSN 792), conducted a brief stop at the Itaguaí submarine base, in the state of Rio de Janeiro, to celebrate two milestones reached by the Brazilian Navy in its Submarine Development Program (PROSUB):  the launch of the BNS Humaitá (S41) and the incorporation of two additional indigenous-built submarine BNS Tonelero (S42), into their fleet.  On the occasion, U.S. Ambassador to Brazil Todd Chapman hosted President Jair Bolsonaro for a tour through the USS Vermont, reaffirming the strong history of military collaboration between the U.S. and Brazil.

Ambassador Chapman remarked, “this visit reiterates our common commitment to a partnership that helps strengthen the security of each of our nations, as well as the broader hemisphere.  I was pleased to see first-hand, along with President Bolsonaro, the world-class technology and capabilities of this vessel, and to reiterate at the highest level of government our commitment to partnership with Brazil.” Minister of Defense Fernando Azevedo e Silva and Minister of Mines and Energy Bento Albuquerque also joined the visit.

The USS Vermont is a Virginia-class fast-attack submarine and was commissioned in April this year, thus being the newest operating U.S. submarine.  It operates in the 4th Fleet area of operations of the U.S. Submarine Forces, which encompasses Caribbean, Central and South American region.  While operating in the Brazilian coast, the USS Vermont conducted anti-submarine warfare (ASW) exercises with the Brazilian Navy Submarine Tupi (S30) and maritime patrol and reconnaissance aircraft. U.S. and Brazil joint maritime operations build enduring partnerships in order to enhance regional security and promote peace, stability and prosperity in the region.

Vice Adm. Daryl Caudle, Commander, U.S. Submarine Forces, also present in the event, congratulated the Brazilian Navy for their progress and said, “The PROSUB program plays an important part in strengthening our bilateral ties and the overall regional security foundation.  We will continue to work closely together toward achieving our shared objectives to improve our combined undersea effectiveness.”

The crew and visitors on the submarine followed strict COVID-19 health protocols for all activities related to the visit.