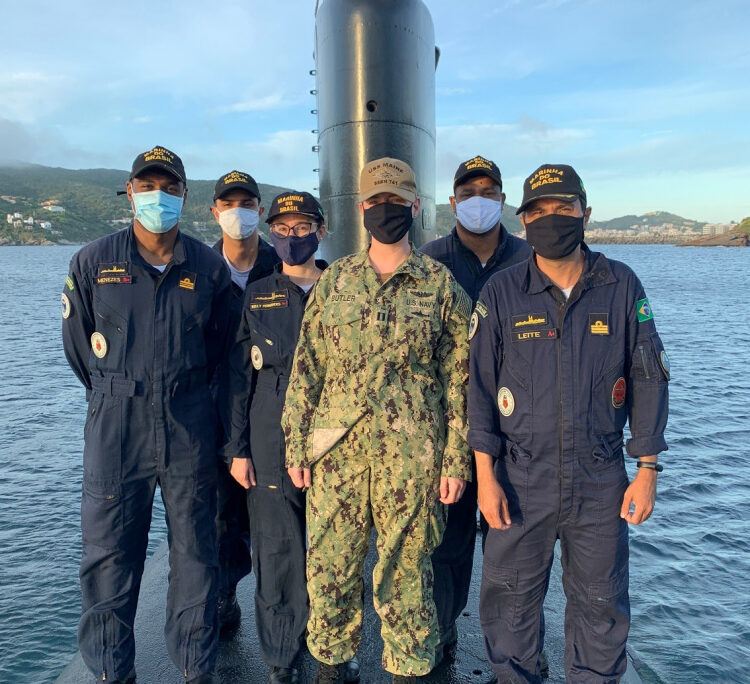 Butler, a submarine officer from Branchburg, N.J., was selected as an Olmsted Scholar in February 2019 and is currently completing two years abroad pursuing a master’s degree in International Relations at Programa de Pós-Graduação San Tiago Dantas in São Paulo, Brazil.

Butler participated in an embark on Tupi for four days at sea during the Qualification Course for Future Submarine Commanding Officers, to help increase the exchange of knowledge between U.S. and Brazilian submarine forces.

During the embark, Butler spent time learning about operations, training, and tactics practiced by Brazilian counterparts.

“Tupi and its crew are extremely agile,” said Butler. “Their capabilities complement those of our submarine force in a way that makes our partnership and joint operations extremely beneficial for both countries.”
Additionally, Butler’s fluency in Portuguese allowed for a smooth exchange and embark while interacting with her fellow submariners.

“My ride on Tupi was incredibly rewarding, both as a submariner and as an Olmsted Scholar,” Butler stated. “I got a rare glimpse into life and operations on a conventional submarine, as well as the chance to meet the crew, live onboard, share meals, swap sea stories, and further my insight and understanding of my host country. The crew members, in true Brazilian fashion, were incredibly warm and welcoming and made me feel at ease.”

The Olmsted Scholar Program was established in 1960 in cooperation with Department of Defense, Navy, Army, Air Force, and Marines. It serves as an opportunity for young military officers to achieve fluency in a foreign language, pursue graduate study at an overseas university and acquire an in-depth understanding of foreign cultures, thereby equipping them to serve in positions of greater responsibility as senior leaders in the United States Armed Forces. It is a three-year program which supports the Secretary of Defense’s emphasis on developing language skills and regional cultural knowledge across the force.