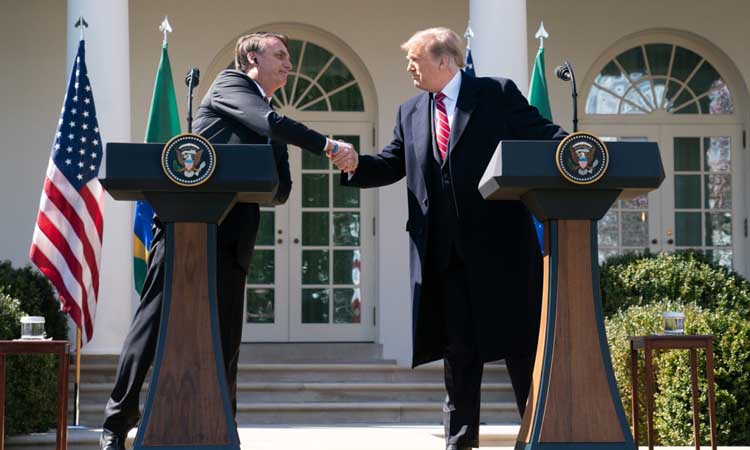 Today, the U.S. and Brazil’s longstanding partnership is advancing concretely for the mutual benefit of both our countries.  Our prosperous cooperation includes four important elements: employment, security, ties between our peoples and democracy.

President Bolsonaro’s visit to the U.S., as well as the visits to Brazil by Vice President Pence and Secretary of State Pompeo, over the past twelve months, reflect the great interest of our people in expanding cooperation.  This partnership is based on more than 150 years of commercial, historical, and cultural ties and a strong commitment to shared democratic values.

First, we are facilitating trade and investments that creates jobs. In March, President Trump declared his support for Brazil to become a full member of the OECD.  We reiterated this support during the ministerial meeting in Paris three weeks ago.  We recognize the Brazilian government’s current initiatives to promote economic reforms, increase transparency, and reduce obstacles to doing business.  In March, our leaders also announced the signing of the Technology Safeguards Agreement (TSA).  With ratification by the Brazilian Congress, the TSA could open new commercial opportunities for Brazil’s aerospace sector, and create well-paid jobs in advanced technologies.  Recognizing that competitive and private sector-driven economies generate good jobs, we are launching a new phase of the Brazil-U.S. CEO Forum and a new Energy Forum to strengthen business ties.  Also, in the coming months, we will launch a US$100 million Biodiversity Impact Investment Fund in the Brazilian Amazon.

Second, we are working together to make our countries safer.  In 2018, we launched the Brazil-U.S. Security Forum and this year we signed two new agreements to strengthen cooperation in border security and law enforcement information sharing.  We are collaborating against transnational criminal organizations whose illicit activities fuel violence on our streets.  In today’s interconnected world, keeping borders secure is a shared challenge.  Recently, the U.S. recognized Brazil as a Major Non-NATO Ally, in acknowledgement of its strategic importance.  Together, we have conducted more training, and cooperation in this area to promote global peace and security.

Third, we are creating bonds between our people.  With the launch of the Brazilian e-Visa, visa applications by U.S. citizens for Brazil increased more than 40 percent.  Now, with the visa exemption for the USA, Australia, Canada and Japan, the number of tourists and entrepreneurs will grow even more.  The U.S. government is committed to facilitating Brazilians’ travel to the country, as evidenced by the US$ 58 million new consulate in Porto Alegre.  And other investments in consular services that reduced the waiting times for a visa inteview.  In the 2018 fiscal year, the U.S. issued more than 640,000 visas to Brazilians, an increase of 12 percent over 2017.  We are continuing to foster more educational exchanges – in 2018, more than 17,000 exchange students traveled in both directions.

Fourth, we are promoting democracy to make the world a better place.  We stand together with the Venezuelan and Cuban peoples struggling to realize democracy in their countries. We also support efforts for global security – from the Brazilians who heroically supported UN peacekeeping operations in Haiti and Lebanon to responding to humanitarian crises, such as assisting millions of Venezuelans who have fled their country.  Brazil and the United States are working together as never before to promote mutual prosperity, security, and the protection of democratic values.

With a longstanding tradition of friendship and new purposes ahead, the partnership with results between Brazil and the United States is bringing concrete benefits to our peoples and the world.