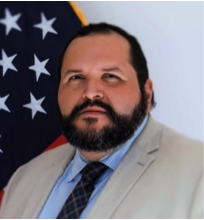 Panfilo Marquez became the Acting Deputy Chief of Mission at the U.S. Embassy in Brasilia on July 5, 2019. Mr. Marquez served as the Minister Counselor for Management Affairs for the U.S. Mission to Brazil since his arrival in October 2017.

Prior to his assignment in Brasilia, Mr. Marquez served as the Management Officer for the Tri-Mission in France. He directly supervised all administrative functions, the Paris Welcome Center, and the Visitor Support Unit. He also served as the key liaison with the U.S. Missions to UNESCO and OECD. It was his second tour in Paris, having served previously as Staff Assistant to Ambassador Leach and Deputy Financial Management Officer. Mr. Marquez has also served as Management Officer in Rio de Janeiro, Brazil and Tijuana, Mexico. Other tours include Costa Rica, Afghanistan, and Jamaica.

He is a native of California and entered the Foreign Service directly from graduate school at UC San Diego.