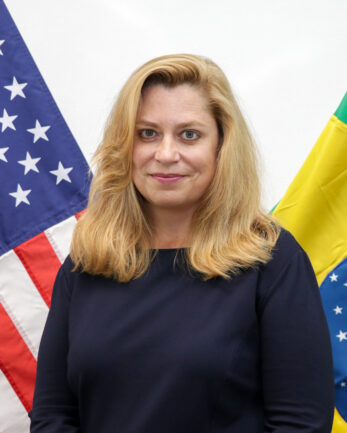 Jacqueline Ward arrived in Brazil to serve as the Principal Officer for the U.S. Consulate in Rio de Janeiro in August 2021.

Most recently, she served as Counselor for Economic Affairs in Bogota. Prior to this assignment, she was a Senior Advisor for International Communication Policy at the State Department’s Economic Bureau. She has previously served as Director of the Iran Regional Presence Office in Dubai during the negotiations for the 2016 Joint Comprehensive Plan of Action nuclear agreement with Iran.

In addition, she was the Political Counselor in Amman during the Arab Spring and the Ambassador’s Representative for Reconstruction in Beirut following Lebanon’s 2006 conflict with Israel. Earlier assignments include Santiago, Helsinki, the State Department Operations Center, and two years with the State Department’s Executive Secretariat supporting Secretary Colin Powell. Before joining the Foreign Service, she worked at Booz Allen & Hamilton, The World Bank, and the U.S. Congress.

Jacqueline Ward is a proud native of Rhode Island. She attended George Washington University and earned Master’s degrees from the Monterey Institute of International Studies and the U.S. Naval War College. She also completed undergraduate studies at the University of Barcelona and MBA coursework at the Pontificia Universidad Católica de Chile. She speaks Spanish, Portuguese, Farsi, and Finnish.