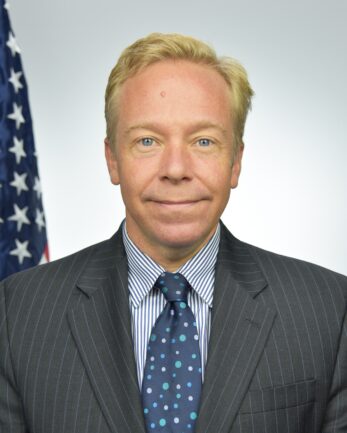 David Hodge began his assignment as Consul General in São Paulo on July 13, 2021. He is a member of the Senior Foreign Service and began his diplomatic career 30 years ago, as a Vice Consul in Rio de Janeiro. He served twice at the U.S. Embassy in Brasília.

Before returning to Brazil, he served as Deputy Chief of Mission in Guatemala City and as Chargé d’Affaires in Panama City in 2019. At the State Department, Mr. Hodge was the Director for Public Affairs and Public Diplomacy in the Bureau of Western Hemisphere Affairs and also was an Assessor at the Board of Examiners.

Mr. Hodge grew up in Indianapolis, Indiana. He received undergraduate degrees from Indiana University in Bloomington and a Master’s from Georgetown University in Washington, DC. He speaks Portuguese, Spanish, and Thai. Consul General Hodge is married to Mr. Romano Bezerril, a native of Natal, Brazil, who has worked in security and consular positions at U.S. Embassies in Brasília, La Paz, Maputo, and Guatemala City.