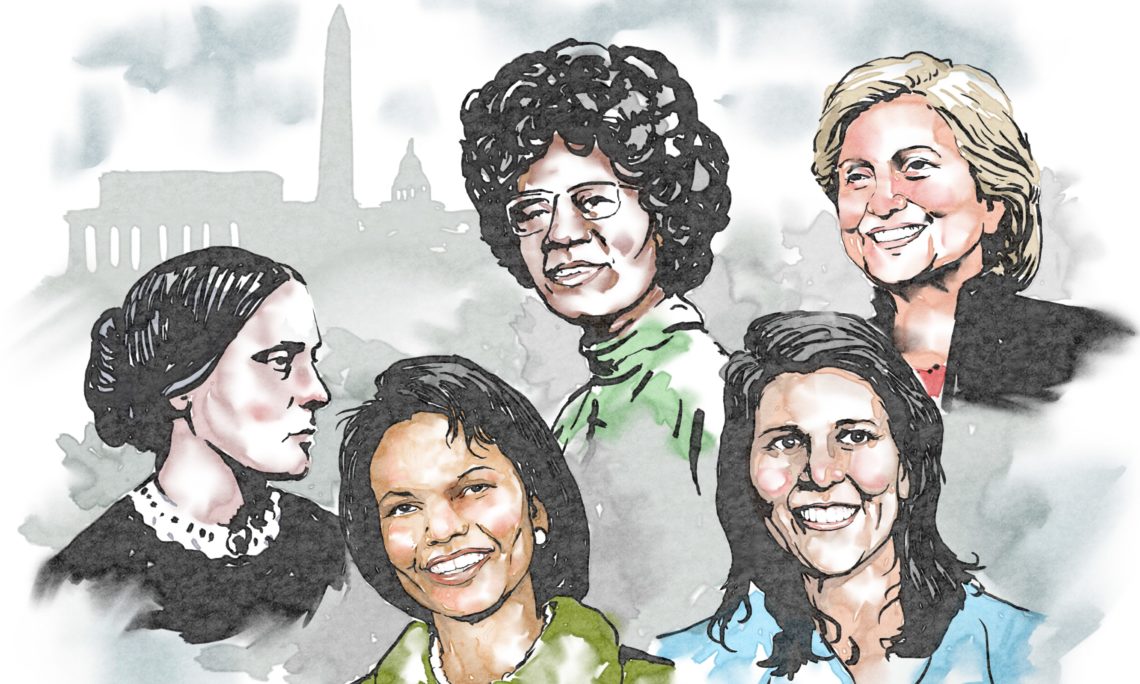 We are proud of our Nation’s achievements in promoting women’s full participation in all aspects of American life and are resolute in our commitment to supporting women’s continued advancement in America and around the world.

America honors the celebrated women pioneers and leaders in our history, as well as those unsung women heroes of our daily lives.  We honor those outstanding women, whose contributions to our Nation’s life, culture, history, economy, and families have shaped us and helped us fulfill America’s promise.

We cherish the incredible accomplishments of early American women, who helped found our Nation and explore the great western frontier.  Women have been steadfast throughout our battles to end slavery, as well as our battles abroad.  And American women fought for the civil rights of women and others in the suffrage and civil rights movements.  Millions of bold, fearless women have succeeded as entrepreneurs and in the workplace, all the while remaining the backbone of our families, our communities, and our country.

During Women’s History Month, we pause to pay tribute to the remarkable women who prevailed over enormous barriers, paving the way for women of today to not only participate in but to lead and shape every facet of American life.  Since our beginning, we have been blessed with courageous women like Henrietta Johnson, the first woman known to work as an artist in the colonies; Margaret Corbin, who bravely fought in the American Revolution; and Abigail Adams, First Lady of the United States and trusted advisor to President John Adams.

We also remember incredible women like Mary Walker, the first woman to receive the Congressional Medal of Honor; Harriet Tubman, who escaped slavery in 1849 and went on to free hundreds of others through the Underground Railroad; Susan B. Anthony, the publisher and editor ofThe Revolution and her friend, Dr. Charlotte Lozier, one of the first women medical doctors in the United States, both of whom advocated for the dignity and equality of women, pregnant mothers, and their children; Rosa Parks, whose refusal to give up her seat accelerated the modern civil rights movement; Shirley Temple Black, the famous actress turned diplomat and first chief of protocol for the President of the United States; Anna Bissell, the first woman CEO in American history; Amelia Earhart, the first woman to fly solo across the Atlantic Ocean; Ella Fitzgerald, the First Lady of Song and the Queen of Jazz; and Sally Ride, the first American woman astronaut.

America will continue to fight for women’s rights and equality across the country and around the world.  Though poverty holds back many women, America cannot and will not allow this to persist.  We will empower all women to pursue their American dreams, to live, work and thrive in safe communities that allow them to protect and provide for themselves and their families.

America is also mindful of the fight that continues for so many women around the world, where women are often not protected and treated disgracefully as second-class citizens.  America will fight for these women too, and it will fight to protect young girls who are robbed of their rights, trafficked around the world, and exploited.

NOW, THEREFORE, I, DONALD J. TRUMP, President of the United States of America, by virtue of the authority vested in me by the Constitution and the laws of the United States, do hereby proclaim March 2017 as Women’s History Month.  I call upon all Americans to observe this month with appropriate programs, ceremonies, and activities.

IN WITNESS WHEREOF, I have hereunto set my hand this first day of March, in the year of our Lord two thousand seventeen, and of the Independence of the United States of America the two hundred and forty-first.