Home Home / News & Events / President Donald J. Trump’s State of the Union Address to the Congress of the United States 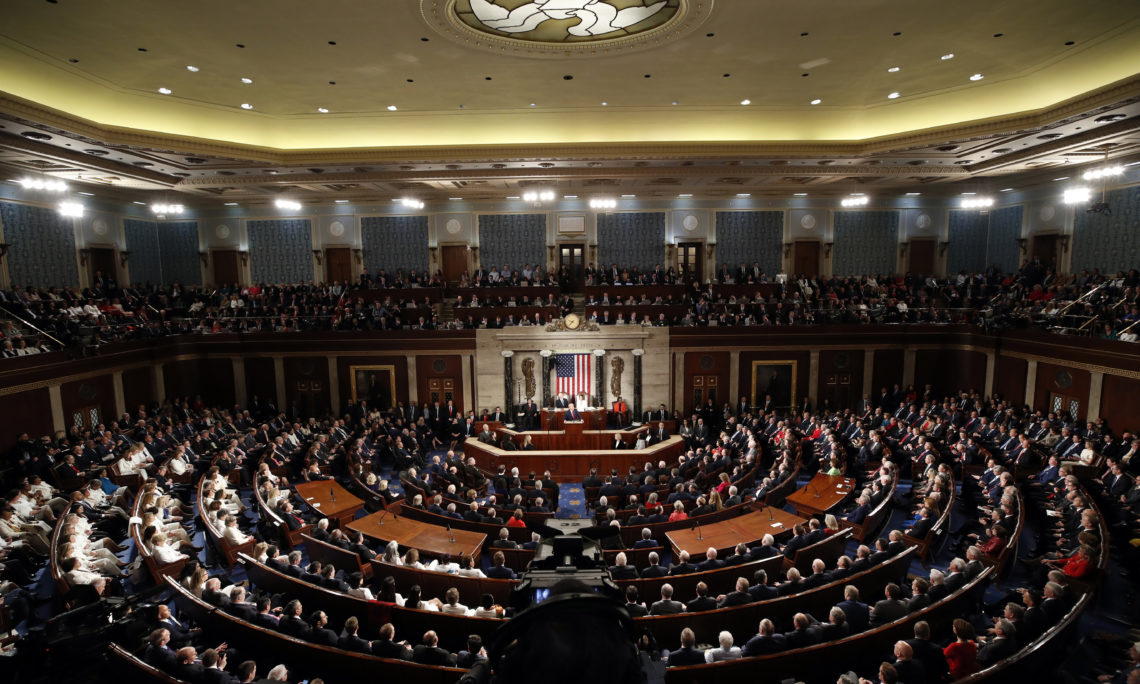 One of the single biggest promises I made to the American people was to replace the disastrous NAFTA trade deal.  In fact, unfair trade is perhaps the single biggest reason that I decided to run for President.  Following NAFTA’s adoption, our Nation lost one in four manufacturing jobs.  Many politicians came and went, pledging to change or replace NAFTA — only to do so and then absolutely nothing happened.  But unlike so many who came before me, I keep my promises.  We did our job. Six days ago, I replaced NAFTA and signed the brand new U.S.-Mexico-Canada Agreement (USMCA) into law.

The USMCA will create nearly 100,000 new high-paying American auto jobs, and massively boost exports for our farmers, ranchers, and factory workers.  It will also bring trade with Mexico and Canada to a much higher level degree, but also to be a much greater level of fairness and reciprocity.  We will have that. Fairness and reciprocity. And I say that finally because it’s been many many years since we were treated fairly on trade. This is the first major trade deal in many years to earn the strong backing of America’s labor unions.

I also promised our citizens that I would impose tariffs to confront China’s massive theft of American jobs.  Our strategy worked.  Days ago, we signed the groundbreaking new agreement with China that will defend our workers, protect our intellectual property, bring billions and billions of dollars into our treasury, and open vast new markets for products made and grown right here in the USA.  For decades, China has taken advantage of the United States, now we have changed that but, at the same time, we have perhaps the best relationship we have ever had with China, including with President Xi.  They respect what we have done because, quite frankly, they could never really believe what they were able to get away with what they were doing year after year, decade after decade, without someone in our country stepping up and saying:  That’s enough.  Now, we want to rebuild our country, and that’s exactly what we are doing. We are rebuilding our country.

As we restore American leadership throughout the world, we are once again standing up for freedom in our hemisphere.  That is why my Administration reversed the failing policies of the previous administration on Cuba.  We are supporting the hopes of Cubans, Nicaraguans, and Venezuelans to restore democracy.  The United States is leading a 59-nation diplomatic coalition against the socialist dictator of Venezuela, Nicolás Maduro.  Maduro is an illegitimate ruler, a tyrant who brutalizes his people.  But Maduro’s grip of tyranny will be smashed and broken.  Here this evening is a very brave man who carries with him the hopes, dreams, and aspirations of all Venezuelans.  Joining us in the gallery is the true and legitimate President of Venezuela, Juan Guaidó.  Mr. President, please take this message back to your homeland.  Thank you, Mr. President. Thank you very much Please take this message back. All Americans are united with the Venezuelan people in their righteous struggle for freedom! Thank you, thank you very much, Mr. President. Thank you very much. Socialism destroys nations.  But always remember, freedom unifies the soul.

To protect the environment, days ago, I announced that the United States will join the One Trillion Trees Initiative, an ambitious effort to bring together Government and the private sector to plant new trees in America and all around the world.

My Administration has undertaken an unprecedented effort to secure the southern border of the United States.

Before I came into office, if you showed up illegally on our southern border and were arrested, you were simply released and allowed into our country, never to be seen again.  My Administration has ended Catch-and-Release.  If you come illegally, you will now be promptly removed from our country. Very importantly, we entered into historic cooperation agreements with the Governments of Mexico, Honduras, El Salvador, and Guatemala.  As a result of our unprecedented efforts, illegal crossings are down 75 percent since May — dropping 8 straight months in a row.  And as the wall rapidly goes up, drug seizures rise, and the border crossings are going down and are going down very rapidly.

To build on these historic gains, we are working on legislation to replace our outdated and randomized immigration system with one based on merit, welcoming those who follow the rules, contribute to our economy, support themselves financially, and uphold our values.

My Administration is also strongly defending our national security and combating radical Islamic terrorism.  Last week, I announced a groundbreaking plan for peace between Israel and the Palestinians.  Recognizing that all past attempts have failed, we must be determined and creative in order to stabilize the region and give millions of young people the chance to realize a better future.

Three years ago, the barbarians of ISIS held over 20,000 square miles of territory in Iraq and Syria.  Today, the ISIS territorial caliphate has been 100 percent destroyed, and the founder and leader of ISIS — the bloodthirsty killer known as Al Baghdadi — is dead!

Every day, America’s men and women in uniform demonstrate the infinite depths of love that dwells in the human heart.  One of these American heroes was Army Staff Sergeant Christopher Hake.

The terrorist responsible for killing Sergeant Hake was Qasem Soleimani, who provided the deadly roadside bomb that took Chris’s life.  Soleimani was the Iranian Regime’s most ruthless butcher, a monster who murdered or wounded thousands of American service members in Iraq.  As the world’s top terrorist, Soleimani orchestrated the deaths of countless men, women, and children.  He directed the December assault and went on to assault U.S. Forces in Iraq, and was actively planning new attacks when we hit him very hard.  That is why, last month, at my direction, the United States Military executed a flawless precision strike that killed Soleimani and terminated his evil reign of terror forever.

Our message to the terrorists is clear:  You will never escape American justice.  If you attack our citizens, you forfeit your life!

In recent months, we have seen proud Iranians raise their voices against their oppressive rulers.  The Iranian regime must abandon its pursuit of nuclear weapons, stop spreading terror, death, and destruction, and start working for the good of its own people.  Because of our powerful sanctions, the Iranian economy is doing very, very poorly.  We can help them make at very good and short-time recovery. It can all go very quickly, but perhaps they are too proud or too foolish to ask for that help.  We are here.  Let’s see which road they choose.  It is totally up to them.

As we defend American lives, we are working to end America’s wars in the Middle East.

In Afghanistan, the determination and valor of our warfighters has allowed us to make tremendous progress, and peace talks are underway.  I am not looking to kill hundreds of thousands of people in Afghanistan, many of them totally innocent.  It is also not our function to serve other nations as a law enforcement agencies.  These are warfighters, the best in the world, and they either want to fight to win or not fight at all.  We are working to finally end America’s longest war and bring our troops back home!