Home Home / News & Events / President Donald J. Trump’s State of The Union Address To the Congress of The United States 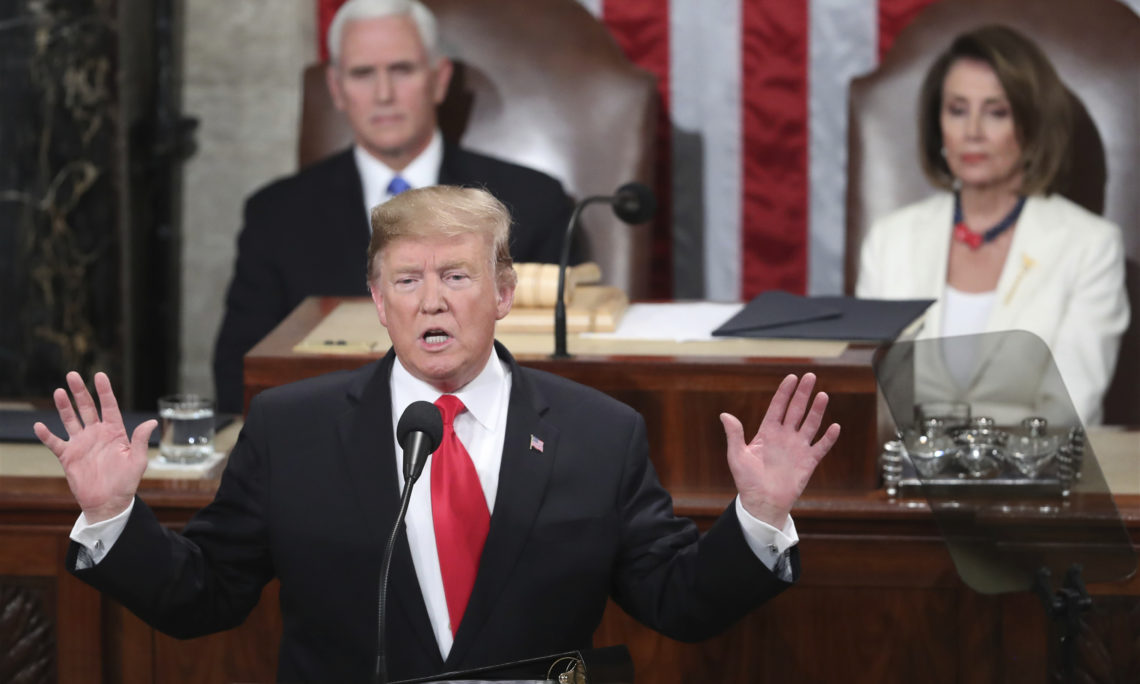 President Donald Trump delivers his State of the Union address to a joint session of Congress on Capitol Hill in Washington, as Vice President Mike Pence and Speaker of the House Nancy Pelosi, D-Calif., watch, Tuesday, Feb. 5, 2019. (AP Photo/Andrew Harnik)

Madam Speaker, Mr. Vice President, Members of Congress, the First Lady of the United States, and my fellow Americans:

We meet tonight at a moment of unlimited potential.  As we begin a new Congress, I stand here ready to work with you to achieve historic breakthroughs for all Americans.

My Administration has sent to the Congress a commonsense proposal to end the crisis on the southern border.

It includes humanitarian assistance, more law enforcement, drug detection at our ports, closing loopholes that enable child smuggling, and plans for a new physical barrier, or wall, to secure the vast areas between our ports of entry.

To build on our incredible economic success, one priority is paramount — reversing decades of calamitous trade policies. So bad.

We are now making it clear to China that after years of targeting our industries, and stealing our intellectual property, the theft of American jobs and wealth has come to an end.

Therefore, we recently imposed tariffs on $250 billion of Chinese goods — and now our Treasury is receiving billions and billions of dollars.  But I don’t blame China for taking advantage of us — I blame our leaders and representatives for allowing this travesty to happen.  I have great respect for President Xi, and we are now working on a new trade deal with China.  But it must include real, structural change to end unfair trade practices, reduce our chronic trade deficit, and protect American jobs.

Our new U.S.-Mexico-Canada Agreement — the USMCA — will replace NAFTA and deliver for American workers, like they have not had delivered to for in a long time. I hope you can pass the USMCA into law so we can bring back our manufacturing jobs in greater numbers, expand American agriculture, protect intellectual property, and ensure that more cars are proudly stamped with four beautiful words:  made in the USA.

Tonight, I am also asking you to pass the United States Reciprocal Trade Act, so that if another country places an unfair tariff on an American product, we can charge them the exact same tariff on the exact same product that they sell to us.

The final part of my agenda is to protect America’s National Security.

Over the last 2 years, we have begun to fully rebuild the United States Military — with $700 billion last year and $716 billion this year.  We are also getting other nations to pay their fair share.  For years, the United States was being treated very unfairly friends of ours, by members of NATO — but now we have secured a $100 billion increase in defense spending from NATO allies. They said it could not be done.

Under my Administration, we will never apologize for advancing America’s interests.

For example, decades ago the United States entered into a treaty with Russia in which we agreed to limit and reduce our missile capabilities.  While we followed the agreement and the rules to the letter, Russia repeatedly violated its terms.  It’s been going on for many years. That is why I announced that the United States is officially withdrawing from the Intermediate-Range Nuclear Forces Treaty, or INF Treaty.  We really have no choice.

Perhaps we can negotiate a different agreement, adding China and others, or perhaps we can’t –- in which case, we will outspend and out-innovate all others by far.

As part of a bold new diplomacy, we continue our historic push for peace on the Korean Peninsula.  Our hostages have come home, nuclear testing has stopped, and there has not been a missile launch in more than 15 months.  If I had not been elected President of the United States, we would right now, in my opinion, be in a major war with North Korea.  Much work remains to be done, but my relationship with Kim Jong Un is a good one.  Chairman Kim and I will meet again on February 27 and 28 in Vietnam.

Two weeks ago, the United States officially recognized the legitimate government of Venezuela, and its new President, Juan Guaido.

We stand with the Venezuelan people in their noble quest for freedom — and we condemn the brutality of the Maduro regime, whose socialist policies have turned that nation from being the wealthiest in South America into a state of abject poverty and despair.

One of the most complex set of challenges we face and have for many years is in the Middle East.

Our approach is based on principled realism — not discredited theories that have failed for decades to yield progress.  For this reason, my Administration recognized the true capital of Israel — and proudly opened the American Embassy in Jerusalem.

As a candidate for President, I loudly pledged a new approach.  Great nations do not fight endless wars.

When I took office, ISIS controlled more than 20,000 square miles in Iraq and Syria.  Just two years ago. Today, we have liberated virtually all of that territory from the grip of these bloodthirsty monsters.

Now, as we work with our allies to destroy the remnants of ISIS, it is time to give our brave warriors in Syria a warm welcome home.

I have also accelerated our negotiations to reach, if possible, a political settlement in Afghanistan.  The opposing side is also very happy to be negotiating. Our troops have fought with unmatched valor — and thanks to their bravery, we are now able to pursue a possible political solution to this long and bloody conflict.

In Afghanistan, my Administration is holding constructive talks with a number of Afghan groups, including the Taliban.  As we make progress in these negotiations, we will be able to reduce our troop presence and focus on counter-terrorism and we will indeed focus on counter-terrorism.  We do not know whether we will achieve an agreement — but we do know that after two decades of war, the hour has come to at least try for peace. And the other side would like to do the same thing.

My Administration has acted decisively to confront the world’s leading state sponsor of terror: the radical regime in Iran. It is a radical regime. They do bad, bad things.

To ensure this corrupt dictatorship never acquires nuclear weapons, I withdrew the United States from the disastrous Iran nuclear deal.  And last fall, we put in place the toughest sanctions ever imposed by us on a country.

We will not avert our eyes from a regime that chants death to America and threatens genocide against the Jewish people.  We must never ignore the vile poison of anti-Semitism, or those who spread its venomous creed.  With one voice, we must confront this hatred anywhere and everywhere it occurs.