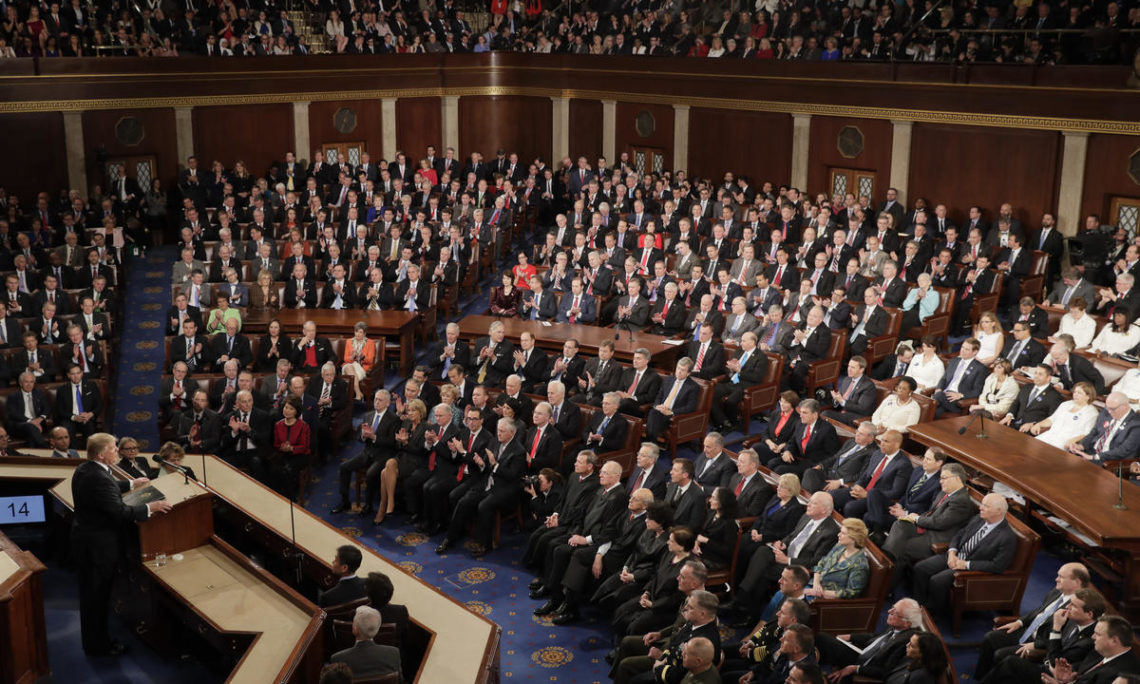 Mr. Speaker, Mr. Vice President, Members of Congress, the First Lady of the United States, and my fellow Americans:

* * * *
America has also finally turned the page on decades of unfair trade deals that sacrificed our prosperity and shipped away our companies, our jobs, and our wealth. Our nation has lost its wealth and we’re getting it back.

The era of economic surrender is totally over.

From now on, we expect trading relationships to be fair and to be reciprocal.

We will work to fix bad trade deals and negotiate new ones. And they’ll be good ones, but they’ll be fair.

And we will protect American workers and American intellectual property, through strong enforcement of our trade rules.

* * * *
In recent months, my Administration has met extensively with both Democrats and Republicans to craft a bipartisan approach to immigration reform. … .
Here are the four pillars of our plan:

The first pillar of our framework generously offers a path to citizenship for 1.8 million illegal immigrants who were brought here by their parents at a young age — that covers almost three times more people than the previous administration covered. Under our plan, those who meet education and work requirements, and show good moral character, will be able to become full citizens of the United States over a 12-year period.

The second pillar fully secures the border. That means building a great wall on the Southern border, and it means hiring more heroes … to keep our communities safe. Crucially, our plan closes the terrible loopholes exploited by criminals and terrorists to enter our country — and it finally ends the horrible and dangerous practice of “catch and release.”

The third pillar ends the visa lottery — a program that randomly hands out green cards without any regard for skill, merit, or the safety of American people. It is time to begin moving toward a merit-based immigration system — one that admits people who are skilled, who want to work, who will contribute to our society, and who will love and respect our country.

The fourth and final pillar protects the nuclear family by ending chain migration. Under the current broken system, a single immigrant can bring in virtually unlimited numbers of distant relatives. Under our plan, we focus on the immediate family by limiting sponsorships to spouses and minor children. This vital reform is necessary, not just for our economy, but for our security, and for the future of America.

As we rebuild America’s strength and confidence at home, we are also restoring our strength and standing abroad.

Around the world, we face rogue regimes, terrorist groups, and rivals like China and Russia that challenge our interests, our economy, and our values. In confronting these horrible dangers, we know that weakness is the surest path to conflict, and unmatched power is the surest means to our true and great defense.

For this reason, I am asking the Congress to end the dangerous defense sequester and fully fund our great military.

As part of our defense, we must modernize and rebuild our nuclear arsenal, hopefully never having to use it, but making it so strong and so powerful that it will deter any acts of aggression by any other nation or anyone else. Perhaps someday in the future there will be a magical moment when the countries of the world will get together to eliminate their nuclear weapons. Unfortunately, we are not there yet, sadly.

Last year, I also pledged that we would work with our allies to extinguish ISIS from the face of the Earth. One year later, I am proud to report that the coalition to defeat ISIS has liberated very close to t 100 percent of the territory once held by these killers in Iraq and Syria and in other locations as well. But there is much more work to be done. We will continue our fight until ISIS is defeated.

Terrorists who do things like place bombs in civilian hospitals are evil. When possible, we have no choice but to annihilate them. When necessary, we must be able to detain and question them. But we must be clear: Terrorists are not merely criminals. They are unlawful enemy combatants. And when captured overseas, they should be treated like the terrorists they are.

In the past, we have foolishly released hundreds and hundreds of dangerous terrorists, only to meet them again on the battlefield — including the ISIS leader, al-Baghdadi, who we captured, who we had, who we released.

So today, I am keeping another promise. I just signed an order directing Secretary Mattis – who is doing a great job. Thank you — to reexamine our military detention policy and to keep open the detention facilities in Guantánamo Bay.

I am asking the Congress to ensure that, in the fight against ISIS and al-Qa’ida, we continue to have all necessary power to detain terrorists — wherever we chase them down, wherever we find them. And in many cases for them it will be Guantanamo Bay.

Our warriors in Afghanistan also have new rules of engagement. Along with their heroic Afghan partners, our military is no longer undermined by artificial timelines, and we no longer tell our enemies our plans.

Last month, I also took an action endorsed unanimously by the U.S. Senate just months before: I recognized Jerusalem as the capital of Israel.

That is why, tonight, I am asking the Congress to pass legislation to help ensure American foreign-assistance dollars always serve American interests, and will only go to friends of America, not enemies of America.

As we strengthen friendships around the world, we are also restoring clarity about our adversaries.

I am asking Congress to address the fundamental flaws in the terrible Iran nuclear deal.

My Administration has also imposed tough sanctions on the communist and socialist dictatorships in Cuba and Venezuela.

But no regime has oppressed its own citizens more totally or brutally than the cruel dictatorship in North Korea.

We are waging a campaign of maximum pressure to prevent that from ever happening.

Past experience has taught us that complacency and concessions only invite aggression and provocation. I will not repeat the mistakes of past administrations that got us into this very dangerous position.

We need only look at the depraved character of the North Korean regime to understand the nature of the nuclear threat it could pose to America and to our allies.

Otto Warmbier was a hardworking student at the University of Virginia, and a great student he was. On his way to study abroad in Asia, Otto joined a tour to North Korea. At its conclusion, this wonderful young man was arrested and charged with crimes against the state. After a shameful trial, the dictatorship sentenced Otto to 15 years of hard labor, before returning him to America last June — horribly injured and on the verge of death. He passed away just days after his return.

Otto’s wonderful parents, Fred and Cindy Warmbier, are with us tonight — along with Otto’s brother and sister, Austin and Greta. Please. You are powerful witnesses to a menace that threatens our world, and your strength inspires us all.

hank you very much. Thank you. Tonight, we pledge to honor Otto’s memory with American resolve.

Finally, we are joined by one more witness to the ominous nature of this regime. His name is Mr. Ji Seong-ho.

In 1996, Seong-ho was a starving boy in North Korea. One day, he tried to steal coal from a railroad car to barter for a few scraps of food, which were very hard to get. In the process, he passed out on the train tracks, exhausted from hunger.

He woke up as a train ran over his limbs. He then endured multiple amputations without anything to dull the pain or the hurt. His brother and sister gave what little food they had to help him recover and ate dirt themselves — permanently stunting their own growth. Later, he was tortured by North Korean authorities after returning from a brief visit to China. His tormentors wanted to know if he had met any Christians. He had — and he resolved after that to be free.

Seong-ho traveled thousands of miles on crutches all across China and Southeast Asia to freedom. Most of his family followed. His father was caught trying to escape, and was tortured to death.

Today he lives in Seoul, where he rescues other defectors, and broadcasts into North Korea what the regime fears the most – the truth.

Today he has a new leg, but Seong-ho, I understand you still keep those old crutches as a reminder of how far you have come. Your great sacrifice is an inspiration to us all. Please. Thank you.

Seong-ho’s story is a testament to the yearning of every human soul to live in freedom.

It was that same yearning for freedom that nearly 250 years ago gave birth to a special place called America. It was a small cluster of colonies caught between a great ocean and a vast wilderness. It was home to an incredible people with a revolutionary idea: that they could rule themselves. That they could chart their own destiny. And that, together, they could light up the entire world.

That is what our country has always been about. That is what Americans have always stood for, always strived for, and always done.