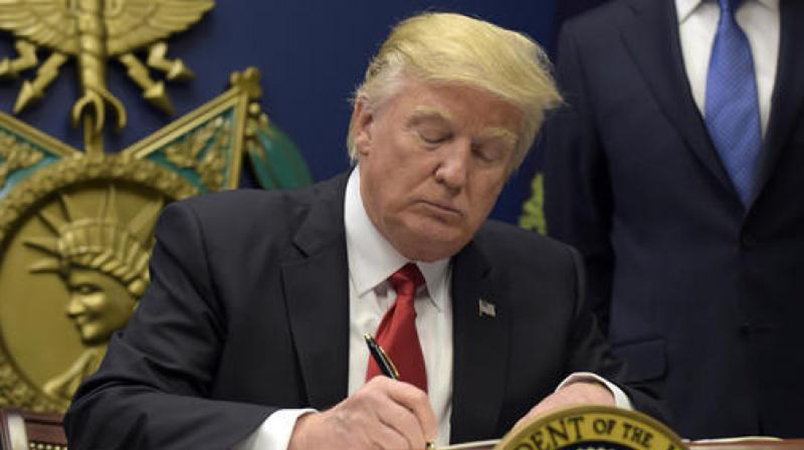 Section 1.  Purpose.  It is the policy of the executive branch to be prudent and financially responsible in the expenditure of funds, from both public and private sources.  In addition to the management of the direct expenditure of taxpayer dollars through the budgeting process, it is essential to manage the costs associated with the governmental imposition of private expenditures required to comply with Federal regulations. Toward that end, it is important that for every one new regulation issued, at least two prior regulations be identified for elimination, and that the cost of planned regulations be prudently managed and controlled through a budgeting process.

Sec. 2.  Regulatory Cap for Fiscal Year 2017.  (a)  Unless prohibited by law, whenever an executive department or agency (agency) publicly proposes for notice and comment or otherwise promulgates a new regulation, it shall identify at least two existing regulations to be repealed.

(b)  For fiscal year 2017, which is in progress, the heads of all agencies are directed that the total incremental cost of all new regulations, including repealed regulations, to be finalized this year shall be no greater than zero, unless otherwise required by law or consistent with advice provided in writing by the Director of the Office of Management and Budget (Director).

(d)  The Director shall provide the heads of agencies with guidance on the implementation of this section.  Such guidance shall address, among other things, processes for standardizing the measurement and estimation of regulatory costs; standards for determining what qualifies as new and offsetting regulations; standards for determining the costs of existing regulations that are considered for elimination; processes for accounting for costs in different fiscal years; methods to oversee the issuance of rules with costs offset by savings at different times or different agencies; and emergencies and other circumstances that might justify individual waivers of the requirements of this section.  The Director shall consider phasing in and updating these requirements.

Sec. 3.  Annual Regulatory Cost Submissions to the Office of Management and Budget.  (a)  Beginning with the Regulatory Plans (required under Executive Order 12866 of September 30, 1993, as amended, or any successor order) for fiscal year 2018, and for each fiscal year thereafter, the head of each agency shall identify, for each regulation that increases incremental cost, the offsetting regulations described in section 2(c) of this order, and provide the agency’s best approximation of the total costs or savings associated with each new regulation or repealed regulation.

(b)  Each regulation approved by the Director during the Presidential budget process shall be included in the Unified Regulatory Agenda required under Executive Order 12866, as amended, or any successor order.

(c)  Unless otherwise required by law, no regulation shall be issued by an agency if it was not included on the most recent version or update of the published Unified Regulatory Agenda as required under Executive Order 12866, as amended, or any successor order, unless the issuance of such regulation was approved in advance in writing by the Director.

(e)  The Director shall provide the heads of agencies with guidance on the implementation of the requirements in this section.

Sec. 4.  Definition.  For purposes of this order the term “regulation” or “rule” means an agency statement of general or particular applicability and future effect designed to implement, interpret, or prescribe law or policy or to describe the procedure or practice requirements of an agency, but does not include:

(a)  regulations issued with respect to a military, national security, or foreign affairs function of the United States;

(b)  regulations related to agency organization, management, or personnel; or

(c)  any other category of regulations exempted by the Director.

Sec. 5.  General Provisions.  (a)  Nothing in this order shall be construed to impair or otherwise affect:

(i)   the authority granted by law to an executive department or agency, or the head thereof; or

(ii)  the functions of the Director relating to budgetary, administrative, or legislative proposals.

(b)  This order shall be implemented consistent with applicable law and subject to the availability of appropriations.

(c)  This order is not intended to, and does not, create any right or benefit, substantive or procedural, enforceable at law or in equity by any party against the United States, its departments, agencies, or entities, its officers, employees, or agents, or any other person.