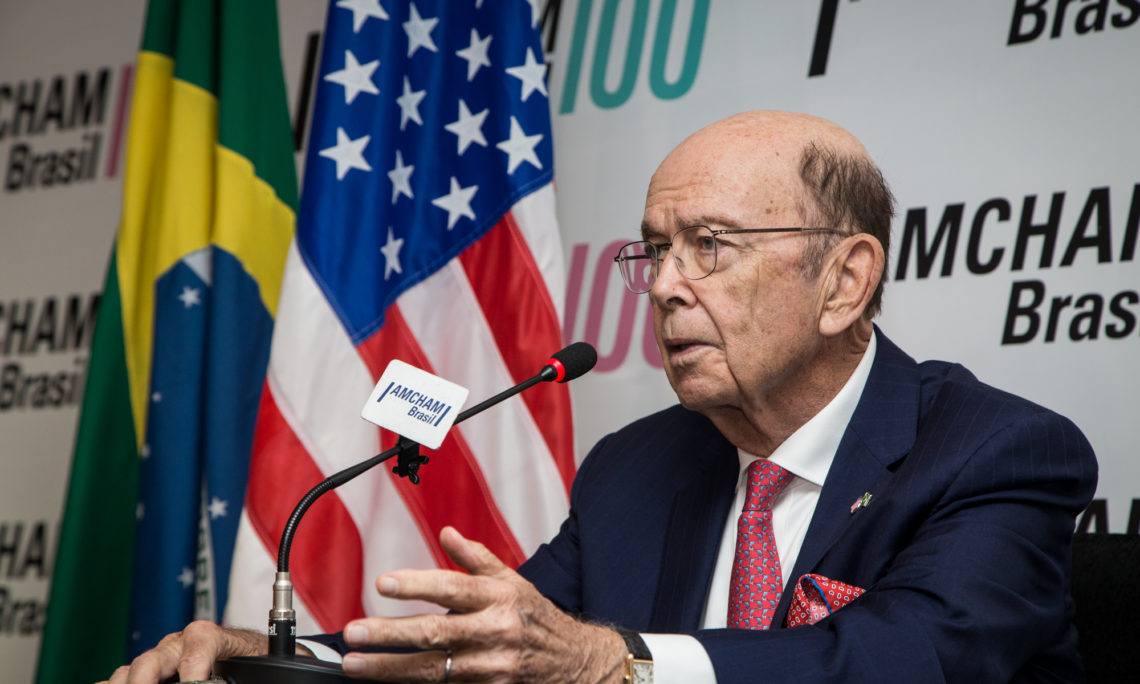 Intro by Mr. Luiz Pretti, Chairman of the Board of AmCham-Brasil and President of Cargill Brazil

Thank you for the kind words.

It’s great to be here for the Chamber’s centennial celebration. AmCham-Sao Paulo has long been an important partner for the Department of Commerce in promoting economic ties.

100 years is an impressive accomplishment. To put it in context, 1919 is the year the Treaty of Versailles was signed to end WWI. In the United States, Prohibition went into effect, and Congress passed the 19th Amendment to give women the right to vote. As evidence of an already important bilateral trade relationship, the Ford Motor Company founded its subsidiary Ford Brasil to import Model T cars.

President Trump is committed to a strong and dynamic relationship with Brazil, one that promotes democracy, commerce, and regional stability. One of President Bolsonaro’s first acts as Brazil’s new president was to declare a desire for the United States to become Brazil’s number one trade and investment partner.

Currently, Brazil is our 13th largest trade partner globally and 3rd in the Western Hemisphere after Canada and Mexico.  U.S. merchandise exports to Brazil were valued at $39.6 billion in 2018, and Brazilian imports at $31.1 billion in 2108.  Our services trade is also substantial, with exports of $26.4 billion in 2017 (latest available) and imports of $7.2 billion. The total stock of Brazilian direct investment in the United States is valued at $47.8 billion (2017, UBO), and the total stock of U.S. investment in Brazil is valued at $68.3 billion (2017, FP). We can expand on these economic and commercial ties.

President Trump and President Bolsonaro are both committed to reducing trade barriers and facilitating investment across a range of industries, especially energy, infrastructure, agriculture, and technology. During their meeting this past March, they agreed to build a Prosperity Partnership to increase jobs and open new opportunities. The two leaders decided to enhance the work of the U.S.-Brazil Commission on Economic and Trade Relations. The Commission will explore new initiatives to facilitate trade, investment, and good regulator practices.

The Presidents also instructed their teams to negotiate a Mutual Recognition Agreement concerning their Trusted Trader programs. This will reduce costs for American and Brazilian companies by making movement of goods across our borders safer and more efficient.

The importance of U.S. cooperation on defense was also discussed. President Trump supported Brazil’s designation as a Major Non-Nato Ally, which became effective in June. Some of the advantages of Major Non-NATO Ally status include collaboration on the development of defense technologies; privileged access to the U.S. defense industry; and increase joint military exchanges, exercise, and training, as well as special access to military equipment financing. Total annual U.S. exports of aerospace and defense products to Brazil rose to $5.8 billion in 2018, including civilian aircraft. We recently held the 3rd formal meeting of the Brazil-U.S. Defense Industry Dialogue, which will continue to work to grow our defense commercial relationship under this new status.

These initiatives were made possible largely through the foundational work of the U.S.-Brazil Commercial Dialogue, which has been ongoing for nearly 15 years. The Commercial Dialogue is informed by an advisory board of U.S. and Brazilian executives who make up the U.S.-Brazil CEO Forum. The Presidents announced a new phase of the U.S.-Brazil CEO Forum, which I will be co-chairing the next meeting in Washington this November. Both presidents also welcomed the creation of a $100 million Biodiversity Impact Investment Fund that will catalyze sustainable investment in the Amazon region.

As leaders of two of the fastest-growing energy suppliers in the world, they agreed to establish a United States-Brazil Energy Forum to facilitate energy-related trade and investment. The Energy Forum is on track for a November launch in Rio de Janeiro. We will be working closely with the Department of Energy to develop a strong private sector component of the Forum.

The United States and Brazil signed a Technology Safeguards Agreement (TSA) in March 2019 during President Bolsonaro’s visit. Once ratified by the Brazilian Congress, the TSA will allow for the use of U.S. launch technology from the Alcantara Space Launch Center. We look forward to U.S. commercial collaboration with Brazil, as it enters the global space economy, a fast-growing sector well on its way to becoming a (US) $1 trillion industry.

The Department of Commerce is responsible for U.S. commercialization of space. The Commerce Department also is party to the U.S.-Brazil Memorandum of Cooperation on Infrastructure Development. Tomorrow, I will attend the 17th Latin American Infrastructure Leadership Forum in Brasilia to support U.S. company participation in regional infrastructure development projects. Together, our countries have established a bold vision and an ambitious commercial agenda – one that will have regional and potential hemispheric impact.

Because of Brazil’s ongoing economic reforms, President Trump supports Brazil’s entry into the OECD. Commensurate with its status as a global leader, President Bolsonaro agreed that Brazil will begin to forgo special and differential treatment in World Trade Organization negotiations.   There is a tremendous potential for us to increase mutually beneficial bilateral trade and investment. Our commercial agenda clearly reflects this desire to achieve mutual – reciprocal – growth in our economic relationship.

U.S. companies are entrepreneurial and agile. They produce some of the most innovative, high quality goods and services in the world. They are competitive anywhere on a level playing field. At the Commerce Department, we are working closely with Brazil and other Latin American governments – engaging at all levels – to build a dynamic hemisphere economy.

We are advocating a business environment based on predictability, transparency, and rule of law. This includes enforcement of anti-bribery laws and conventions (UN Convention Against Corruption and OECD Anti-bribery Convention), open and transparent procurement systems, and corporate codes of conduct. It also includes good regulatory practices based on transparency and effectiveness that are not unnecessary barriers to trade and investment. That’s the environment where trade and commerce can flourish.

We want data to flow freely across borders and ensure secure IT networks and supply chains. We are addressing trade facilitation by fast-tracking World Trade Organization commitments to eliminate unnecessary “red tape” and expedite the movement and release of goods. These commitments include publication of customs procedures, forms and documents to the Internet and notification by Customs official when goods at borders are detained. These high standards are reflected in our regional trade agreements – including the USMCA—which contains the highest standards in all these disciplines and more.

Intra South American trade is only half the percentage of intra regional trade in Southeast Asia largely because of excessive costs and delays at the borders. And, while we have several strong financing programs in Latin America, we are looking at ways to give U.S. companies more financing tools to compete head-to-head against foreign rivals.

The new Development Finance Corporation lending authority puts the former Overseas Private Investment Corporation’s lending authority to $60 billion, permits equity investment, and merges in additional financing resources from USAID. The DFC is expected to come online by October. I will remain on the DFC and ExIm boards.

We have Commercial Service officers in more than 100 U.S. cities and over 70 countries throughout the world, including 14 countries in the Western Hemisphere. In addition to Commercial Service officers, we have placed U.S. Patent and Trademark Office attaches throughout the region. They provide training on intellectual property law, promote IP rights, and coordinate IPR enforcement initiatives with local governments

We also have digital attaches working to support greater data and trade flows between our countries in ways that will not compromise the national security of either nation.
And, we have standards attaches, working to promote the use of international standards. We want to ensure that standards, testing, and conformity assessment requirements do not act as barriers to trade in the region.

Here in Brazil, my team of 50 people, spread out over five offices, constitutes one of our top three USG commercial networks in the world! They work with U.S. companies, large and small, seeking access, connections, and the tools needed to succeed in foreign markets. The United States wishes to be the preferred partner for projects in Brazil and the Latin American region because we know our companies offer the cutting-edge innovation and expertise that these projects demand. And we know that such partnerships will be mutually beneficial.

The United States also welcomes direct foreign investment that creates and opportunities in both countries. As a follow-up to our SelectUSA Investment Summit held in Washington in June, our SelectUSA team will be hosting a Facilitated Investment Mission from August 26th to the 30th in Brazil.

Brazil is a truly global country, competing and succeeding in the global marketplace. It is the 8th fastest growing source of investment in the United States in sectors including steel, aircraft manufacturing, IT, and construction. The total stock of Brazilian direct investment in the U.S. is valued at nearly $43 billion (2017).

Brazil’s 14-member delegation at our recent Summit included the CEO of Solfintec, an agriculture precision company, that has FDI stock in the U.S totaling nearly $43 billion. Our SelectUSA investment road show will be stopping here in Sao Paulo, and three other cities (Campinas, Belo Horizonte, and Florianopolis). The mission includes representatives of U.S. economic development organizations eager to meet with Brazilian companies.

We in the Americas need to continue building strategic partnerships and regional economic frameworks to promote jobs, prosperity, and peace throughout the region. The Administration’s goal is to make the Western Hemisphere the strongest and most competitive economic force in the world.  Working together, we can help our people, our countries, and our region reach that goal.

Again, it has been an honor to be here for your centennial celebration. Keep up the good work. And best wishes for another successful 100 years!

Thank you, and now I’ll be joining your CEO of AmCham-Brasil for a moderated discussion based on your questions.