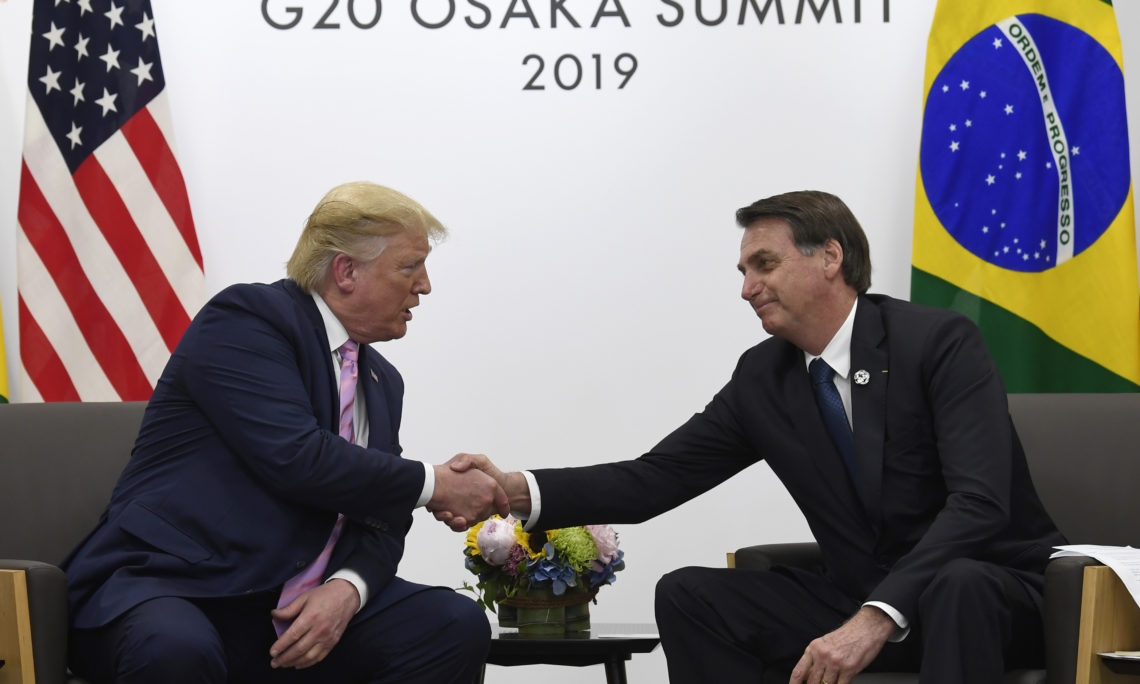 PRESIDENT TRUMP:  Thank you very much everybody.  We’re with a gentleman who had one of the greatest election wins anywhere in the world, as far as I’m concerned, and he was very proud of his relationship with President Trump — President of Brazil.  And he’s a special man — doing very well, very much loved by the people of Brazil.  And I think we can say that Brazil and the United States are as close or closer as they’ve ever been.  So I just want to welcome you and say thank you very much, my friend.

PRESIDENT BOLSONARO:  (As interpreted.)  Yes, indeed.  Thank you very much.  It gives me great pleasure to be next to you, Mr. President.  I have been a great admirer of you for quite some time, even before your election, and it gives me great honor to be with you.

The two countries we represent have a great deal in common.  We’re two major countries — great countries — and, together, can do a great deal to the benefit of our two peoples.  Brazil is endowed with assets that the world does not have, and I will be able to engage in talks with President Trump to establish a full partnership to the (inaudible) development of our nations.

I support Trump.  I support the United States.  I support your upcoming reelection.  And I do hope that you will come to Brazil, and you have an open and standing invitation to visit Brazil, even before the upcoming election, so that we can showcase to the world that politics in Brazil has indeed changed.  And we stand together and ready to work close (inaudible).

PRESIDENT TRUMP:  Well, thank you very much, Mr. President.  And we will come to Brazil.  And you do have assets that very few countries can even think about — the assets you have in your land and in your water and in so many other places.  You have some of the great assets in the world.  And it’s a tremendous country with tremendous people, so I look forward to going.

Q    President Trump, are you going to ask Brazil to take sides on the trade war with China?

AIDE:  Excuse me.  Translation — translation for the President.

(The interpreter for President Bolsonaro speaks.)

PRESIDENT TRUMP:  Thank you very much everybody.

Q    Are you going to ask Brazil to take sides in the trade war with China, President?

But we are — we’re a hot country.  We’re doing well.  So we’ll see what happens tomorrow with China.

PRESIDENT TRUMP:  Help on what?

Q    Help on the trade war with China?

PRESIDENT TRUMP:  Not a question of “help”; it’s a question of whether or not we do something.  And I think we have a very good chance.  We’ll see what happens.  Ultimately, something will happen, and it’ll only be good — good things happen.

Q    Mr. President, do you expect that President Xi is going to put an offer on the table tomorrow for a trade deal?

PRESIDENT TRUMP:  We’ll see what happens.  You’re going to know, maybe, before most.  We’ll see what happens tomorrow.  It’ll be a — it’ll be a very exciting day, I’m sure, for a lot people, including the world.  It’ll be an exciting day.  A lot of people are talking about it, and it’s very interesting.  And it’s going to come out, hopefully, well for both countries.  And ultimately, it will work out.

Q    Have you promised China that you won’t put anymore new tariffs on for another six months?

PRESIDENT TRUMP:  No, I haven’t promised.  No.  Good question.  No.

Q    Mr. President, have you discussed Venezuela with President Putin?  And do you intend to discuss it in this meeting?

Q    So did you lose momentum on Venezuela, President Trump?

PRESIDENT TRUMP:  No, not at all.  No.  No.  Things take time.  But we’re behind a certain group of people; you know who the people are.  We’re behind the people of Venezuela — that’s who we’re really behind, more than anything else.  And we’ve been helping them a lot.  We’ve been bringing a lot of food and a lot of medical and a lot of other things to Venezuela.

And we’re working with Colombia very closely — with Colombia — to help.  Because, really, it’s a humanitarian crisis.  That just shows what socialism can do.

You know, I’ve been watching the debates a little bit, in between meetings, and I wasn’t impressed.  But when you look at the socialism and you look at what it can do — that’s what you’re talking about there.  And that’s become like the Socialist Party.  In fact, I heard — there’s a rumor the Democrats are going to change the name of the party from the “Democrat Party” to the “Socialist Party.”  I’m hearing that.  But let’s see if they do it.

Okay?  Thank you all very much.