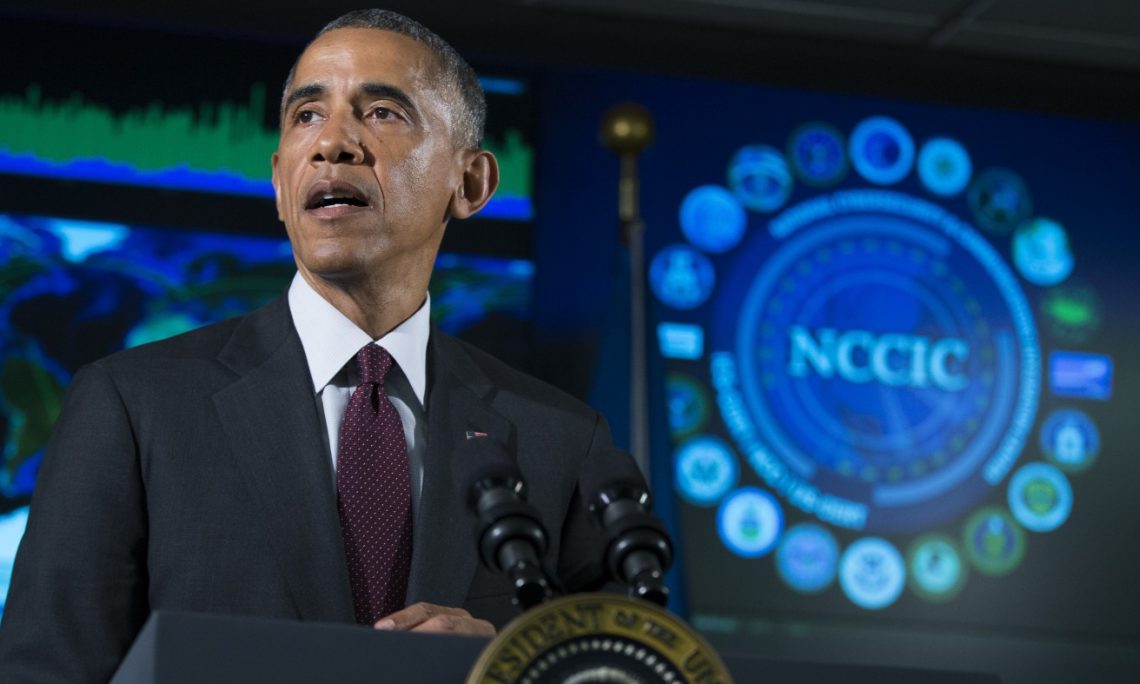 THE PRESIDENT:  Several weeks ago, I announced a Cybersecurity National Action Plan that addresses what increasingly the American people understand as one of our greatest challenges.

The Internet has brought incredible opportunity, incredible wealth.  It gives us access to data and information that are enhancing our lives in all sorts of ways.  It also means that more and more of our lives are being downloaded, being stored, and as a consequence are a lot more vulnerable.  That’s true for the private sector.  That’s true for individual Americans.  That true for federal, state, and local governments.  It’s true for our critical infrastructure.

And as I indicated when I announced this national action plan, right now we are not as well organized as we need to be to make sure that we’re dealing with all these threats in an effective way.  We’ve made some enormous progress since I came into office, chipping away at the problem, trying to upgrade certain systems, trying to patch over certain security vulnerabilities.

But what I’ve indicated is, even as we are vigilant and constantly trying to improve the security of systems that we currently have, and even as we set up frameworks for cooperation with the private sector where there are particular vulnerabilities, this is going to be a big agenda, a long-term agenda that is extremely complicated, extremely technical, and is going to require us to overhaul a bunch of legacy systems that are already in place.

And for that reason, part of the Cybersecurity National Action Plan was to put together a bipartisan commission whose task was not to generate some fat report that collects dust, but in a timely way focuses on what are the long-term challenges that we face, what are the systems that we need to build, and can set a clear sense of direction for the federal government, working in concert with the private sector, state, and local actors for the next five years, 10 years, 20 years, so that we can make sure that we get the benefits of the Internet and utilization, and not the dangers and threats.

I am really happy that we have identified two people who I can’t think of anybody who would be better in serving in this capacity:  A dear friend of mine, my former National Security Advisor, Tom Donilon, who spent a lot of years here in the White House steeped in national security challenges; understands every aspect of our intelligence systems, our national security systems, and has worked at the highest levels of government.  And Sam Palmisano, who is the former CEO of IBM.  So as I’ve joked with him, he knows a little bit about computers.  But he has also served in a variety of non-profit and advisory boards, thinking very deeply about the issue of how do we make cybersecurity a top priority and how do we do better by the American people.

So with a chairman who understands government and national security issues, a vice-chairman from the private sector who understands the intimacies of computing, of the digital world, the economic aspects of this, I think we’ve got two of the best possible people to chair this — to head up this effort.

We’re also going to make sure that some of our key Cabinet Secretaries like Jeh Johnson, Secretary of the Department of Homeland Security, Penny Pritzker, our Secretary of Commerce, and others are working very closely with this commission.  And we’re going to be announcing additional names from academia, the private sector, and the national security sector who can add to this effort.

Their goal is going to be to produce a report no later than December 1st that will advise not just me but the next administration, and potentially administrations after that, in terms of how we deal with this problem.  And the scope of the work is broad.  They’re going to be thinking about everything from how do we keep the huge databases that exist in the federal government more secure, to how do we more effectively work with critical sectors of our economy, whether it’s the financial sector or our critical infrastructure, like utilities, to make sure their systems are more secure; how do we provide the general public timely and continuously updated information about the best practices they need to keep their families safe, keep their finances safe, keep their health information private; how are we going to improve the process that we purchased — IT software and hardware that makes the government run so that it’s not as vulnerable to hacking and attacks; how do we make sure that we attract the very best personnel to work on these issues.

So there’s going to be a wide range of issues that these guys are charged with.  I have told them that they’re going to have the full support of the White House and the federal government in moving this effort forward.  But there was a poll just in the last few days showing that the American people understand that this is a problem; identified this as, I think, the third-highest threat to their wellbeing and their safety and prosperity.  And it’s only going to grow.

So we’re very excited about Tom and Sam’s participation.  We’re confident that this is going to be the kind of product that is of great importance to everybody.  And this is not an ideological issue that should divide Washington along party lines.  This is something that everybody has got an interest in getting right.  And I want to just thank them for the outstanding work they do.  And I’m looking forward to getting a work plan for the United States of America to make sure that we’re getting this right.