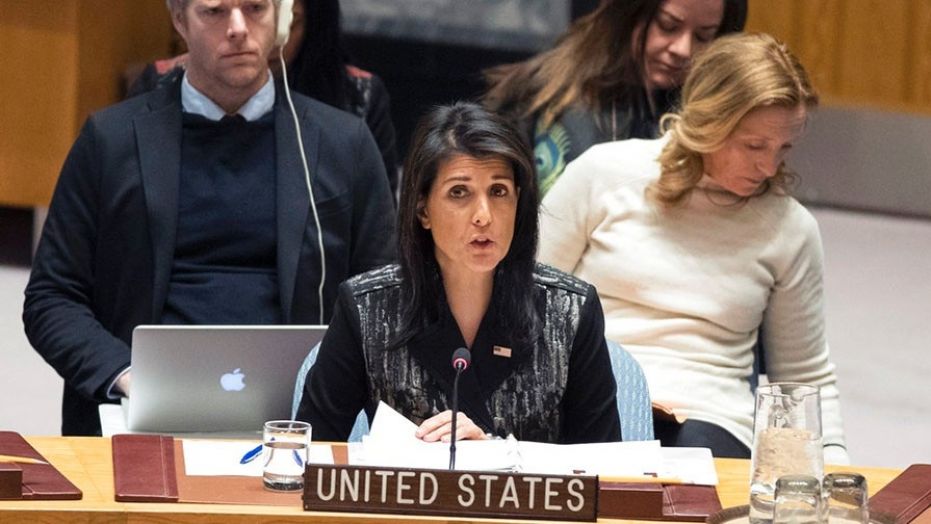 Thank you, Mr. President, and Happy New Year to all of the members of the Security Council and the General Assembly. In the past week, what has happened on the ground throughout the nation of Iran is something the world must take note of. It is a spontaneous expression of fundamental human rights. The Iranian people are rising up in over 79 locations throughout the country. It is a powerful exhibition of brave people who have become so fed up with their oppressive government that they’re willing to risk their lives in protest.

The world should applaud their courage. The voices of the Iranian people should be heard. We have debated the proper role of human rights in the Security Council. Some of our colleagues believe that human rights have no place here. They believe human rights and fundamental freedoms are the business only of the governments that control them.

The United States does not share that belief. Human rights are not the gift of governments. They are the inalienable right of the people themselves.

Freedom and human dignity cannot be separated from peace and security. When the rights of the people are denied, the people rightly resist. If the concerns are not acknowledged, then peace and security are inevitably threatened. We have seen that repeatedly throughout human history. The case of Syria provides a horrible recent testament to this fact.

And what is happening in the towns and cities across Iran right now bears out this fundamental truth. The Iranian regime’s contempt for the rights of its people has been widely documented for many years. The people of Iran have finally had enough, and they are showing it by taking to the streets.

If you listen to the slogans they chant in the street, this understanding comes through loud and clear. The United Nations reports that the Iranian regime spends at least $6 billion every year propping up the murderous Assad regime in Syria. The people of Iran know this. And so they are telling their government, “Let go of Syria.” “Think of us.”

The Iranian regime spends millions on militias in Iraq each year. It gives millions more each year to the Houthi rebels in Yemen, including sending them ballistic missiles to fire at other countries. Meanwhile, the average Iranian family is 15 percent poorer today than it was 10 years ago. So the Iranian people demand, “think of us.”

The regime gives low interest loans to the elite and well-connected. It rewards construction contracts to corrupt Islamic Revolutionary Guard Corp-affiliated firms. They construct buildings that skimp on safety. Thousands of these buildings collapsed during an earthquake. Hundreds died. And the Iranian people chant, “think of us.”

Today the people of Iran are speaking to their government, and their message is undeniable: Stop the support for terrorism. Stop giving billions of our money to killers and dictators. Stop taking our wealth and spending it on foreign fighters and proxy wars. Think of us.

Freedom loving nations worldwide have spread support for the cause of the Iranian people. Canada. Norway. The United Kingdom. Israel. France. Sweden. The European Union. We honor and appreciate all of these statements of support for universal human rights. But we must do more. The Iranian regime is cutting off internet access in an attempt to shut down communication among the protestors. They are attempting to silence the voice of the Iranian people. We cannot allow that to happen.

Every UN Member State is sovereign, but Member States cannot use sovereignty as a shield when they categorically deny their people human rights and fundamental freedoms. I call on all of my colleagues to join me in amplifying the message of the Iranian people. And I call on the Government of Iran to stop censoring the voice of the people and to restore the access to the internet. Because in the end, the Iranian people will determine their own destiny.

And let there be no doubt whatsoever: the United States stands unapologetically with those in Iran who seek freedom for themselves, prosperity for their families, and dignity for their nation. We will not be quiet. No dishonest attempt to call the protestors, “puppets of foreign powers,” will change that. The Iranian people know the truth. And we know the truth.

They are acting of their own will, on their own behalf, for their own future. Nothing will stop Americans from standing in solidarity with them. In 2009, the world stood by passively while the hopes of the Iranian people were crushed by their government. In 2018, we will not be silent.

Once again, the people of Iran are rising up. They are asking for something that no government can legitimately deny them: their human rights and fundamental freedoms. They are calling out, “Think of us.”

If the founding principles of this institution mean anything, we will not only hear their cry, we will finally answer it. The Iranian regime is now on notice. The world will be watching what you do.