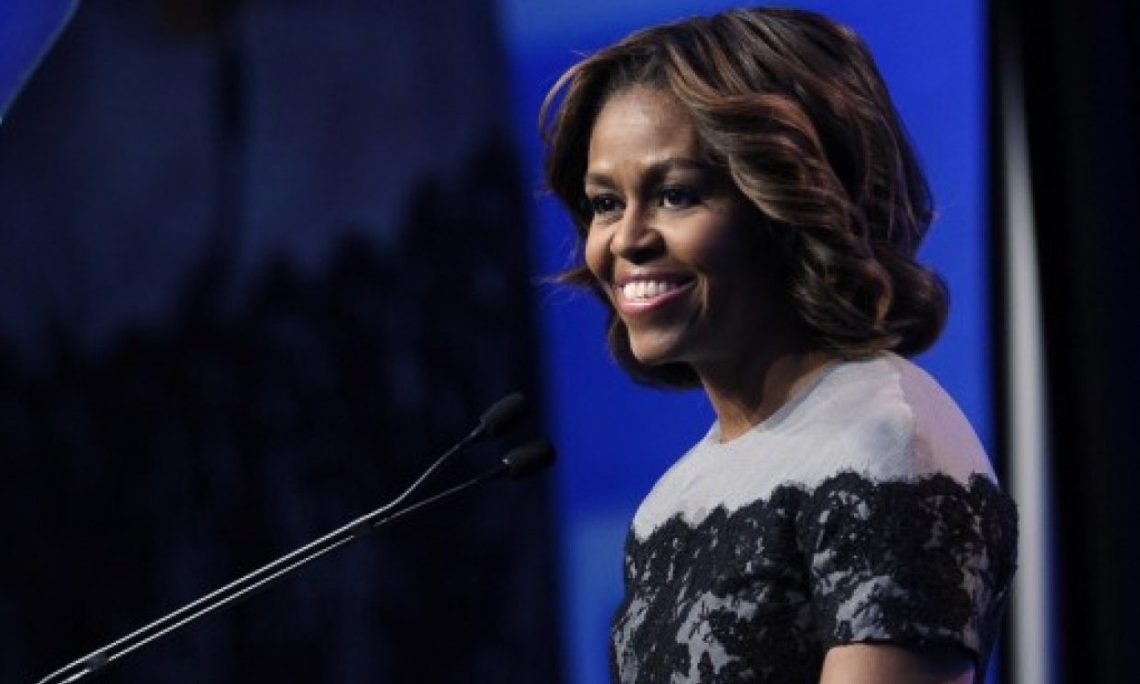 THE WHITE HOUSE
Office of the First Lady

MRS. OBAMA:  Hi, everybody.  Good morning — or afternoon  — or wherever we are.  (Laughter.)  Hello.  Thank you so much for joining us as we start the 100 Day Countdown to the thrilling moment when we let the games begin.  I’m really honored to be here today.

I want to start by thanking Jordan — where did Jordan go? Hey, Jordan.  What’s going on? — for that really kind introduction.  We’re so proud of him.  We’re excited to have him compete in this Summer Olympic Games.  I also want to thank the outstanding leaders from the U.S. Olympic Committee who are joining me on this stage.  You guys, thank you so much for all your great work — as well as The Band Perry, who is one of our favorites.  I want to thank them for being here.  Coach Auriemma, thank you all so much for everything you’re doing.

And, of course, most of all, I want to thank these incredible athletes who are here today.  I have to turn around and look at them because I just got here.  (Laughter.)  They look so good!  (Laughter.)  I want to recognize them for the extraordinary work that they’ve been doing.  I’m proud, I’m honored to be in the presence of these Olympians and Paralympians.

In fact, this is kind of a dream come true for me, because I’m here today not just as the First Lady, but as a real, lifelong, die-hard Olympics fan.  To this day, I still remember the excitement that I felt as a little girl growing up on the South Side of Chicago when Olympic season would roll around.  My family and all the kids in our neighborhood, we would gather around somebody’s TV somewhere in the neighborhood, and we would watch for hours as our Olympic favorites would compete — whether it was Mary Lou Retton, or Carl Lewis.  I mean, I could go on.  I mean, these times meant the world to kids in neighborhoods all over the country.

And that’s really what the Olympic Games are all about.  One of the reasons I wanted to be here today to kick this off, to be a part of the 100 Day sort of celebration is that we’re not just talking about bringing home the gold — which we will, right?  (Applause.)  Okay, we’re going to do that.  It’s not that we’re just proudly representing the United States to the rest of the world — which I know these Olympians will do so well.  But the Olympics are also about inspiring young people here at home, truly, to get them active, and to live up to the example that our Olympic and Paralympic athletes have always set with their dedication, their determination, their unyielding commitment to excellence.

And we want to bring that Olympic spirit all across this country and into big cities and tiny towns, and to kids and families like mine, like I was at that age — wherever they may be watching the Olympics these days, whether it’s around the TV or a smartphone — I don’t know what people do today — but to cheer on our U.S. team, but to bring that spirit into communities.

We also want our young people to be inspired by the amazing stories of these athletes — the endless hours that they’ve devoted to get to this day, the countless sacrifices that these men and women make to do the sport that they love.  All the hardship that they’ve overcome to get to this day — we want our kids to know about that.  Because we want to show our young people that if they work hard enough, and if they dream big enough, they can achieve what they want.

And these men and women are really the best role models for our kids.  So we don’t just want our young people to watch them, we want them to try these sports themselves.  I mean, I know so many of these folks up here probably got started because they were watching some hero and they tried something new.  And we want more and more of our kids to develop into that next generation of athletes and fans and sports enthusiasts.

So that’s why I’m really thrilled to announce that the USOC and 16 of its national governing bodies will be providing opportunities for nearly 2 million kids across this country to participate in Olympic sports in their own communities.  They’re going to have access to everything from basketball and tennis to things like fencing and judo — maybe things that kids usually don’t have access to.  Because so many of these kids in our country, they never have access to these kind of opportunities.

They won’t just be learning athletic skills; the cool thing is they’re going to be learning life skills as well — like discipline, team work, and of course, the importance of giving 100 percent to everything that they do.

They’re also going to be learning what I always talk about are life habits — the habits that we’ve been emphasizing through the past six years through the Let’s Move! initiative — habits like staying active, fueling your body with good food so that you can actually compete in the way that you need to.

So that’s why I’m here.  I am a fan.  I’m ready for this.  I want the country to start gearing up for the Olympics like we used to when we were little.  I want everybody glued to the TV, trying out sports, thinking about getting up off that couch, competing with your neighbor, but most importantly, cheering these men and women on.

So I want to thank the USOC, as well as the Partnership for a Healthier America for making these opportunities available to kids across the country.  I also want to thank the folks at NBC who are going to be promoting these opportunities through the Gold Map initiative that they just talked about this morning, and other efforts that they’re going to be using to expose young people to Olympic sports and encouraging them to get active.

And finally, I want to thank our Olympic and Paralympic athletes for representing our country in Brazil.  We wish them all the luck in the world — although they don’t need it because they’re super bad!  (Laughter.)  They’re already awesome.  They’re already going to kick butt.  (Laughter.)  But we want them to continue to make us proud as athletes, of course, more importantly, as role models and as the outstanding ambassadors to this country that we know they will be.

And with that, I’m going to actually stop talking — and they told me I have to actually try some things.  So wish me luck.  You all be easy on me, all right?  (Laughter.)