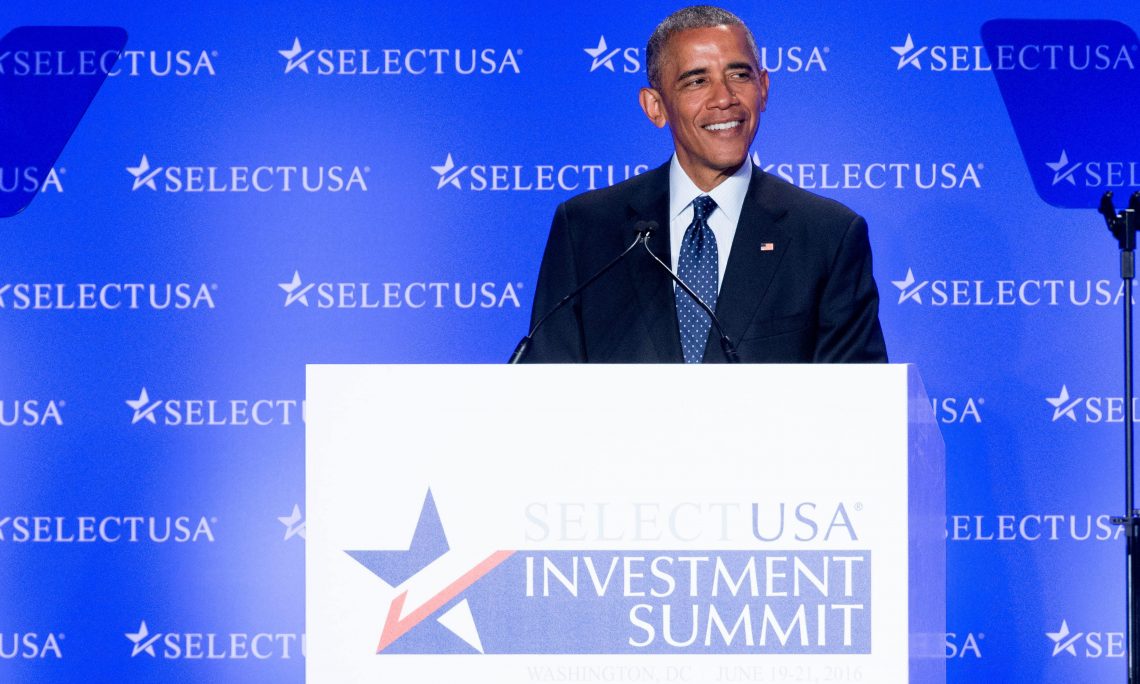 THE PRESIDENT:  Well, let me begin by thanking Penny -– not only for her kind words and friendship, but for her outstanding leadership in promoting American business and making the case for commercial diplomacy.  Congratulations not only to Penny, but also her entire time, especially my dear friend Vinai Thummalapally on yet another sold-out summit.  Give Vinai a big round of applause.  (Applause.)

Those of you who do not now Vinai, he’s a former ambassador, and more importantly was one of my roommates in college.  (Laughter.)  So he got his job on the merits — (laughter) — but it is true that he has some compromising information — (laughter) — that if it was ever fully disclosed, I’d be in trouble.  (Laughter.)  But he has done an outstanding job.

To all of you who have crossed oceans to be here, welcome.  And to all of my Cabinet Secretaries and ambassadors here, thank you for the extraordinary job that you do.

I’ve been talking with a lot of young people lately, including on college campuses around the country.  And some of you who are visiting from other countries know that when I travel abroad, one of my favorite things to do is to have a town meeting with young people overseas, as well.

And one of the things that I remind young people, just to offer them a little bit of perspective, is that no matter how grim the news sometimes seems, no matter how extraordinary the challenges that humanity or America seems to be facing at any given moment, if you had to choose a moment in human history in which to be born, and you didn’t know ahead of time who you were going to be –- what your nationality was, or your gender, or race, or class -– if you had to pick one moment in history that gave you the best chance to succeed, you would choose right now.  You would choose this moment, when the world is wealthier, better educated, more open, more tolerant, more connected than it has ever been at any time in human history.  Less violent.  Less driven by division.  You’d choose today.

And as I think about what you’re doing here in this hall, I’d add a corollary to that observation.  If you could choose any place and time to invest your business’s precious resources, I believe you’d choose right here, right now.  (Applause.)  If you choose a place to expand your portfolio, to place your bets, to open up a plant, to start building the next great new business or service, you would select the USA -– because nowhere in the world and never in history has there been a better place to grow your business.

Here’s why:  Never before has the United States recorded 75 straight months of private sector job growth.  Never before has our high school graduation rate been higher, preparing students for college and careers in your industries.  Never before have we insured more than 90 percent of our citizens, and we’ve seen the slowest growth in the price of health care in 50 years.  And that’s important for — (applause) — that’s important for a whole host of reasons, including the fact that healthier workers are more productive workers, not to mention better consumers, and more affordable health care makes it easier for your businesses to add jobs and pay a good wage.  Never before have we had such high-standard free-trade agreements that level the playing field.  And when complete, when we’ve gotten it done, the Trans-Pacific Partnership will do even more to lower the cost of exporting, eliminating taxes and custom duties, and raising intellectual property standards that protect data and ideas and jobs.

You would choose right here, right now, because no other economy is so crucial for the global economy.  No other country can add more innovation to your business or bring your innovative products to more markets.  No country has as many top universities, and no country invests more in research and development than we do.  In fact, America is responsible for one-quarter of the world’s R&D investments.  (Applause.)  No country can match our competitiveness in cutting-edge manufacturing.  No country is home to more entrepreneurs or more supercomputing.  No country has done more to build a culture of making and tinkering, and entrepreneurship and risk-taking, and of innovation and invention.

And no other country is home to more foreign direct investment than the United States of America.  Over the last four years, no other country has been named by CEOs around the world more frequently as the best place to invest with confidence.  And all of this is for a very good reason:  In large part because the decisions we’ve made since the financial crisis to build our economy on a new foundation for the future, there is no country on Earth that’s better positioned for the long run than the United States.

We’ve doubled our production of clean energy, even as we continue to produce traditional energy sources at an extraordinary pace, which means energy costs are lower here than they are in many other places around the world.  Our rule of law, our mature capital markets, all these things contribute to an extraordinary place to do business.

But the truth is, it’s easy to make the case, and it’s one each of the economic development organizations represented here can make just as well, because behind it are the most talented and most innovative workers in the world:  American workers.

In today’s world, where business doesn’t stop at borders, and when trade is how we shape economic change to our advantage, when the term “global economy” is redundant because of global supply chains being tied into every element and every aspect of our lives, these partnerships are the keys to success for all of us no matter where we live, no matter if you’re a small startup or a major multinational.  As the local economic development experts here all know, communities that open their doors to foreign investment create more jobs and economic activity than those that don’t.

And since we held the first SelectUSA Summit three years ago, participating companies have invested more than $10 billion in 35 U.S. states and territories.  (Applause.)  And a lot of them met at this event, in the exhibition hall, or through SelectUSA’s online matchmaking program.  At last year’s summit, an Italian tissue company started a conversation with folks from central Ohio, and next month they’re breaking ground in the town of Circleville on a manufacturing facility that will create hundreds of jobs in a part of the American Midwest that needs them.  It will be the largest private sector investment in Circleville in decades -– and it started right here at SelectUSA.  (Applause.)

At that same summit, an agricultural tech company from Surat, India met economic development representatives from Missouri.  And within a year, the company established its U.S. headquarters in St. Louis.  And we want more success stories like these.  We want more of you to invest in America.  We’re ready to welcome more of the jobs you help create, just as you’re ready for American workers and customers to help you succeed globally.  So I believe investing in the United States is the best business decision you can make.

And we also know that investment is always about the future.  So as proud as we are about the lead in innovation we’ve developed over the last eight years, we’re running up the score.  We’re not resting on our laurels.  Since 2014, we’ve opened eight cutting-edge manufacturing hubs -– public-private partnerships that specialize in game-changing technologies like 3D printing, photonics, the next-generation textiles.  And today, I’m proud to announce a ninth hub based in Los Angeles that will design smart sensors to make all types of manufacturing more efficient.  And we’ve got more hubs on the way.

These institutes are new, but the innovators who are doing incredible things, they’re who we’ve always been as Americans.  That’s why near my desk, in the Oval Office, I keep models of great American patents like the Morse telegraph and the propeller blade, and the gear-cutting machine.  And that’s why I’m so proud of SelectUSA, which has proven to be a pretty good innovation and investment itself, and one that I hope will endure and I’m confident will endure after Penny and I leave office.

Now, I also know that the longer I talk, the less time you have to make deals — (laughter) — with the folks that are sitting around you.  So let me just remind you that this is not just about jobs and trade, it’s not just about hard, cold cash.  It’s also about building relationships across borders.

When your companies come together, you help bring countries and cultures together.  You generate greater understanding among peoples from different parts of the world.  That’s one of the most important things that you produce, and you should never underestimate its value.  At a time when there is strong pushback in a lot of corners of the world against this process of globalization; at a time when, as I’ve argued here in the United States and overseas, when people are rightly concerned that that process of technology and innovation and globalization may be leaving some people behind; at a time when we have to be more mindful and attentive to the concerns of those who are not benefitting and seeing their wages and incomes go up as quickly as others; and at a time when the advanced economies in particular have to guard against a winner-take-all economy in which inequality grows — despite all those legitimate concerns that have to be addressed to give workers greater voice and to make sure that living wages are paid and working conditions are strong, what is also true is that the ability for us to trade and do business and to integrate our companies and people learning from each other, and innovation spreading and connecting the globe, promises prosperity and reductions and poverty and, ultimately, less likelihood of war and violence and conflict.

It is something that can help us advance all of our countries at the same time.  It’s something that we have to nurture and to value.  The world is smaller than it used to be because of innovation, because of technology, because of globalization, because of global markets.  And that is something that can work for everyone if we do it right.  And that’s been part of the premise of SelectUSA.  When you select USA, when you succeed, you’ll help ensure that years from now, when the next generation asks itself about the best time to be in business, the best time to be a citizen of this world, they’ll be happy to answer, in their own day, “right now.”

So good luck.  I’m rooting for you.  Make a deal.  And make that smart choice to invest in the United States of America.  We are open for business.

God bless you.  Thank you very much.  God bless the United States of America.  Thank you.  (Applause.)