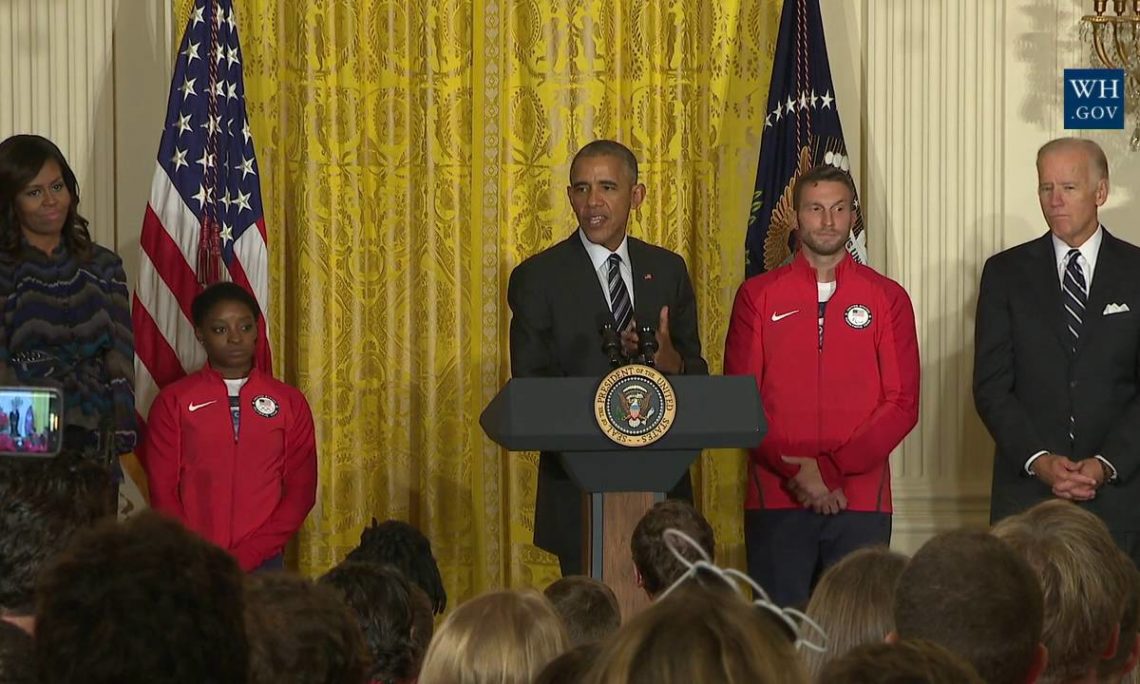 Office of the Press Secretary
For Immediate Release

Now, first of all, I want you to know that I was going to do, like, a floor routine on the way out with Simone.  (Laughter.)  But we decided it was a little too crowded and it would be —

MRS. OBAMA:  And he can’t touch his toes.

THE PRESIDENT:  And I can’t touch my toes.  (Laughter.)  So we scrapped that idea.  You are the last team of Olympians and Paralympians that we will have the honor of welcoming to the White House.  (Applause.)

THE PRESIDENT:  But the story of this year’s Team USA is all about firsts.  Our Olympians came in first so many times more than anybody else.  It wasn’t even close:  46 golds.  Not to brag, but 46 golds.  (Applause.)  You made the U.S. the first country in 40 years to top the medal chart in every category.  (Applause.)  And it was a feat built one unprecedented accomplishment at a time.

So, for example, only one American woman has ever won gold on the vault.  Only one American has won four golds in gymnastics in a single Game.  That would be this young lady, Simone Biles.  (Applause.)

Only one American woman has ever won gold in the shot put.  That’s Michelle Carter.  (Applause.)

Only one African American woman has ever won a swimming gold.  That would be Simone Manuel.  (Applause.)

Only one American boxer, male or female, has ever won back-to-back Olympic golds — Claressa Shields.  (Applause.)

Only one cyclist has ever won three golds in the same event — America’s Kristin Armstrong, who did it in the driving rain one day before her 43rd birthday.  (Applause.)

Only one female Olympian has ever medaled at six straight Games.  That would be America’s Kim Rhode.  (Applause.)

Only one female track-and-field athlete has ever won six golds, and that would be America’s Allyson Felix.  (Applause.)

There’s only one country ever to sweep every medal in the women’s 100-meter hurdles, and that would be the United States of America.  Give it up for Brianna and Nia and Kristi for the great work they did.  (Applause.)

And then there’s this young woman named Katie Ledecky.  (Applause.)  Katie’s back there somewhere — there she is.  I was nervous that she was going to ask me to, like, hold all her medals while I was speaking or something because — (laughter) — so she obliterates her own records in the 400 and the 800 freestyle, lapped the field in the 800.  When you were watching on TV — you all see it on TV?  Like there’s nobody else in the pool?  (Laughter.)  Crazy.

And then there are some firsts that show the world America’s greatness doesn’t come only from high scores or fast times, but from our diversity and our tolerance and our open hearts.  This summer’s fencer, Ibtihaj Muhammad, became the first American female athlete to compete in the Olympic Games in a hijab.  And that’s important too, because one of the wonderful things we love when we see our Olympians is everybody is from all kinds of different backgrounds and shapes and sizes — although all very good-looking.  (Laughter.)  Just exuding health.  Like everybody’s teeth is really white and their eyes are really shiny.  (Laughter.)

THE PRESIDENT:  Fruits and vegetables.

So all this applies to the entire team, but you will notice that there was a preponderance of women that I was mentioning here.  (Applause.)  One of the reasons our country is so proud of this year’s Team USA is 2016 belonged to America’s women Olympians.  I mean, no question.  (Applause.)

We had more women competing in these Games than any nation ever.  Our women alone won more golds than most countries did.  Our women’s 61 medals — most ever by any women’s team –- breaking the record set by, of course, Team USA four years ago.  And as the father of two young women, for them to have that example of health, and drive, and competition, and persistence, and strength — it makes me really proud.  So thank you — all the great jobs that you guys did.

Now, this year’s summer Olympians gave us enough milestones and moments to last the next four years.  Michael Phelps became the greatest Olympian of all time, broke a 2,000-year record for the most individual Olympic titles.  If you’re breaking, like, a 2,000-year record, that’s pretty impressive.  (Laughter.)  You know what I mean?  If they’ve got to go back to the Greeks, that’s an impressive record.  (Laughter.)

Our men and women’s basketball teams continue to dominate the world.  Sam Kendricks, a U.S. Army reservist and pole vaulter somehow stopped himself mid-sprint and stood at attention when he heard the National Anthem playing on the other side of the stadium.  Thank you, Sam.  (Applause.)  And then right after Will Claye won a silver in the triple jump, he jumped right into the stands to ask his girlfriend, fellow Olympian Queen Harrison, to marry him.  (Laughter and applause.)  So there was all kinds of stuff going on here.  (Laughter.)

Of course, we continue to be inspired by our Paralympians like Allysa Seely.  Her doctors once said she might not walk again.  Then she went out and won a triathlon — sorry, doctors.  (Applause.)  Brad Snyder, Navy veteran, lost his eyesight to an IED in Afghanistan — went out and won three golds in the pool.  (Applause.)  Sergeant Elizabeth Marks, wounded in Iraq, still serves on active duty in our Army, does not hide her scars, just goes out and wins gold in the 100-meter breaststroke.  That’s what she does.  (Applause.)

And then we’re in awe of American athletes like Abbey D’Agostino, who showed that the Olympics are about more than just setting records.  It’s about sportsmanship and character.  Some of you saw when Abbey collided on the track with another running — runner, tearing her ACL.  Abbey popped up, reached out her hands to her competitor and said, “Get up, we have to finish this race.”  “We have to finish this race.”  And that’s a remarkable sentiment in the middle of an individual event.  But that’s exactly what the Olympic spirit and the American spirit should be all about.  (Applause.)

So I could talk about this forever, but if I keep on going longer, I’m going to get like “Phelps Face” from you guys.  You’re going to be like — (laughter) — you’re going to be hungry.  You want to get this — get out of here.  So let me just say how proud all of you made not just Michelle and me, but every American.  And it inspires us to do what we do that much harder.

We admire your athleticism, but we also admire your character and your stick-to-it-ness.  We know you don’t do this for the money or the fame.  You know.  (Laughter.)  So many of you, you’re holding down a full-time job or you’re going to school at the same time, and then you’re trying to find time for your families, contribute to causes.  Many of you have been involved in things like It’s On Us and Let’s Move!.  And you’re doing this just with endless hours of training, and somehow you make it look easy.

So remember that you know when somebody is watching you for the first time and they see how hard you work and what you accomplish, and they feel inspired, they feel like they can take any challenge on — what you do has ripples all across the country.  Imagine what it means for a young girl or a young boy who sees somebody who looks like them doing something and being the best at what they do.

And that’s one of the most extraordinary things about our Olympic team.  There’s no kid in America who can’t look at our Olympic team and see themselves somewhere.  That’s part of the reason why we’re successful — because we gather talent from every corner of the globe.  And through the years of people arriving — whether it’s in Ellis Island or Angel Island or coming over the Rio Grande; some cases, coming not of their own accord — we’ve become something more than just the sum of our parts.  We’ve become Americans together.  And there’s something special about that — all races, all faiths, all traditions, all orientations, all marching together under that same proud flag.  Not bound by a creed or a color, but by our devotion to an enduring set of ideals:  That we’re all created equal, that we can think and worship and love as we please, and that we can pursue our own version of happiness.

That’s a great gift.  That’s what makes us strong.  And I want to, as a consequence, take a minute to thank some people who paved the way to create that sense that we’re in this together.  We’re honored to have here the legendary Tommie Smith and John Carlos here today.  Where are they?  (Applause.)  Proud of them.  (Applause.)  Their powerful silent protest in the 1968 Games was controversial, but it woke folks up and created greater opportunity for those that followed.  And they’re now in the brand-new museum of African American History and Culture.  You can see their cleats.  And near their statue hangs the cleats of the great Jesse Owens, what he wore in the 1936 Games, so that every American can have a sense of the courage that he displayed.

In fact, Jesse Owens once said, “The purpose of the Olympics is to do your best.”  And Michelle, Joe and I want to thank all of you for not just doing your best but inspiring our best.  Thanks for leading by example, not just every four years or when the cameras are on, but every single day.

So congratulations.  God bless you.  God bless the United States of America.  (Applause.)