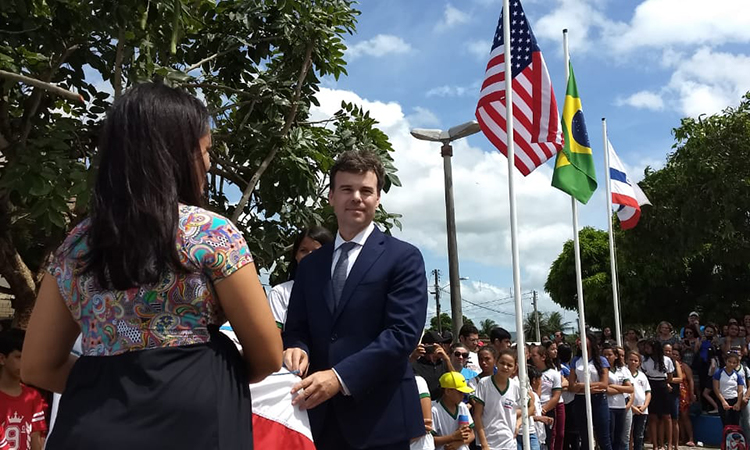 On May 10, 1944, in the midst of World War II, an American PBY-Catalina amphibious aircraft on a routine flight from Belem to Recife fell from the sky near a small settlement in the rugged sertão of Rio Grande do Norte. All ten members of the crew, U.S. sailors attached to the Navy maritime patrol squadron VP-45, perished in the crash. Local residents in the area–simple families, poor farmers and laborers–witnessed the crash and were the first to respond to the tragedy. They searched the wreckage, retrieved the crew’s remains, carried them by horse-drawn cart, and buried them in the cemetery of the town of Riachuelo.

On May 10, 2019—seventy-five years to the day—the mayor of Riachuelo invited Consul General John Barrett to an unveiling of a plaque in the municipal park to memorialize the names of the fallen American soldiers and honor the community that came to their aid, even in death. Hundreds of Riachuelo residents, representatives from the Brazilian 3rd Naval District, and state and local dignitaries in attendance listened to the Consul General’s remarks, “The United States and Brazil share a robust partnership founded on four important pillars: economic partnership, mutual security, and democratic ideals and values–the same values of shared humanity and generosity that the people of this area demonstrated when they came to the aid of a fallen US aircraft in 1944.”

The event also highlights the 204 years of shared history and close cooperation between the U.S. Consulate General in Recife and Brazil. Today, as exemplified by the March visit of President Jair Bolsonaro to meet with President Trump in Washington D.C., the U.S. Mission in Brazil is strengthening our already deep ties, expanding trade, people-to-people engagement, and law enforcement and security cooperation.

Riachuelo’ s moving act of solidarity with the United States was inspired by the work of Natal historian Rostand Madeiros who uncovered new details of the tragic crash and personal stories from local residents while researching for a book on Rio Grande do Norte’s role in WWII. Madeiros told the stories of residents like Seu Lourenço Filho, who at 90 years old is the last living witness to the crash. Lourenço Filho spoke to the Consul General with clarity about his memory of hearing the jarring sound of engines in distress and seeing the plane’s final descent. Town leaders honored Lourenço Filho with a place of honor at the ceremony surrounded by family.

To emphasize the importance of preserving our shared history for future generations, the Consul General announced an essay contest, in collaboration with the Riachuelo Municipal Secretariat of Education, for local middle and high school students on the theme of the ceremony and Natal’s rich WWII history. Members of the consulate will return in August to present awards to the winners.