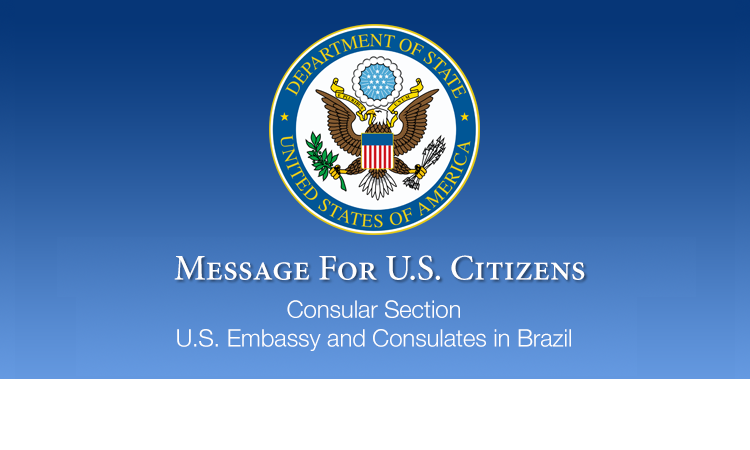 As advised in our message of January 24, there has been a resurgence in human cases of yellow fever in various regions of Brazil, including the Sao Paulo city and state.  At this time, we are joining authorities in monitoring the situation in the Santo Amaro neighborhood of Sao Paulo, where the U.S. Consulate is located.  Recently, three monkeys found in the neighborhood adjacent to the Consulate compound were confirmed to have died of yellow fever.  Additionally, one monkey was found dead on consulate grounds on February 12, and is still being tested for cause of death.  The purpose of this message is to underscore guidance provided by local authorities, to exercise caution in areas known to be affected by yellow fever.  Public health authorities have recommended that those individuals older than 9 months and under the age of 60 receive the Yellow Fever vaccine.  Those over 60 years of age or nursing mothers or pregnant women should consult with their physician regarding whether the vaccine is appropriate given your health.  Other precautions include taking measures to prevent mosquito bites, including wearing long sleeve shirts and long pants, using mosquito repellant, and avoiding outdoor activities as much as possible, especially in forested areas.

We continue to provide regular services to American citizens.  We have cancelled visa appointments at the U.S. Consulate General in São Paulo for February 15.  We plan to resume normal visa operations on February 16.  Visa operations at the other consulates and embassy are unaffected.  We will continue to make the most up-to-date information available on our U.S. Embassy website and social media pages, including Facebook and Twitter.

Additional informational resources include the following:

We strongly recommend that U.S. citizens traveling to or residing in Brazil enroll in the Department of State’s Smart Traveler Enrollment Program (STEP) at travel.state.gov.  STEP enrollment gives you the latest security updates, and makes it easier for the U.S. embassy or nearest U.S. consulate to contact you in an emergency.  If you don’t have Internet access, enroll directly with the nearest U.S. embassy or consulate.