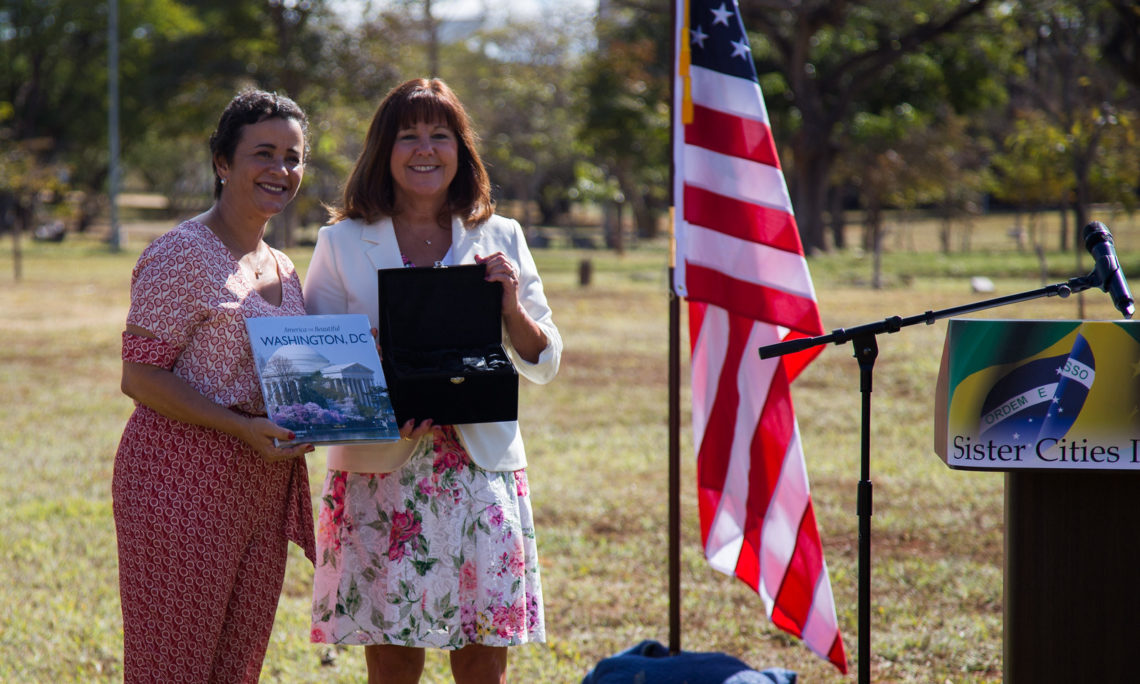 The United States demonstrated its renewed partnership between Washington, D.C. and Brasilia with the gift of the White Trumpet Tree, a flowering tree that grows in the southern part of the United States as well as in Brasilia. Standing at a podium and near the tree, Mrs. Pence explained to the people of Brazil the importance of strengthening global relationships and the value behind cultural exchanges.

“The tree planting represents, not a single diplomatic event, but an ongoing commitment between our two countries,” said Mrs. Karen Pence. “The roots of this tree represent the individual communities of our two capital cities, Washington, D.C. and Brasilia, as well as all sister city links between the United States and Brazil. Our commitment to work together to nurture each other will help us grow a strong foundation of diplomacy that promotes peace through respect, understanding, and cooperation—one individual, one community at a time.”

On behalf of the Mayor of Washington, D.C., the Second Lady also presented First Lady Rollemberg with a book about Washington, D.C. and a globe with the seal of the District of Columbia. In exchange, the First Lady of Brazil presented to Mrs. Pence a book about Brasilia and a frame containing four mounted tiles well-known to Brasilia. The gifts will be delivered to the Mayor’s Office upon return to the United States.

The United States shares 28 sister city or state relationships with Brazil. The relationship between Washington, D.C. and Brasilia was formed in 2013.

Founded by President Dwight D. Eisenhower in 1956, Sister Cities International serves as a hub for institutional knowledge and best practices for citizen diplomacy. The group has united tens of thousands of citizen diplomats and volunteers in over 500 member communities with over 2,000 partnerships in 145 countries on six continents. You can learn more about Sister Cities International at www.sistercities.org.