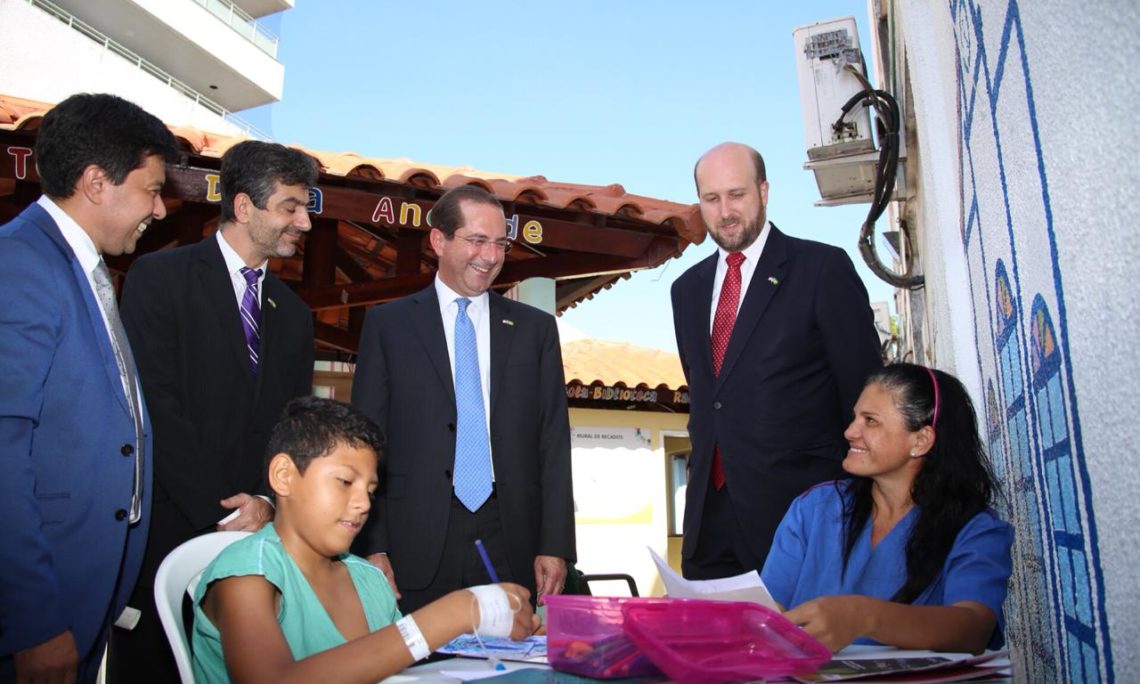 From September 30 to October 3, the U.S. Health and Human Services Secretary Alex Azar visited Fortaleza and São Paulo to discuss the ongoing collaboration between the United States and Brazil towards global health security, bilateral science partnership, and health sector reform.

In Fortaleza, from September 30 to October 1, Secretary Azar met with local families to learn about Zika and microcephaly.  He discussed how the two nations can work together to enhance and protect our citizens against global health threats.  Secretary Azar visited the Urgent Care Center Praia do Futuro where he learned about the structure of 24-hour urgent care units in support of Brazil’s decentralized public health system.

Secretary Azar met with Ceará State Governor Camilo Santana, State Health Secretary Henrique Javi, and other key health officials to discuss the United States-Brazil collaboration on the Zika virus.  Secretary Azar also met with Dr. Islane Verçosa of CAVIVER – a non-governmental organization (NGO) in Brazil that engages with the public health system and international partners such as the Centers for Disease Control and Prevention (CDC).  Secretary Azar and Dr. Verçosa discussed the partnership between CDC and the Brazilian Ministry of Health on the CDC’s Zika Outcomes and Development in Infants and Children (ZODIAC) investigation and how the results of this study have informed the care of children impacted by Zika.  At CAVIVER, Azar also met with children and families affected by congenital Zika syndrome.

Secretary Azar reaffirmed HHS’ and the CDC’s continued support for Zika activities and reiterated that the Zika story is not over for affected families who face lifelong disabilities for affected children.  The Secretary emphasized that CDC continues to monitor the health outcomes and care of affected babies to learn how to best protect mothers and babies from Zika virus infection and other emerging threats.

On October 2, in São Paulo, Secretary Azar and Brazil’s Minister of Health Gilberto Occhi visited the Syrian-Lebanese Hospital, and a municipal children’s hospital, Menino Jesus.  He also visited the Butantã Institute.  While at the institute, Secretary Azar and Minister Occhi discussed the U.S.-Brazil long-standing cooperation in health research including biotech and vaccine production.  HHS’ collaborative work with Brazil has successfully resulted in a number of new innovations moving all the way to the manufacturing stage.  Secretary Azar discussed the latest updates on the tetravalent dengue vaccine that was developed in collaboration with National Institute of Health (NIH).  The candidate vaccine has completed Phase 1 and 2 trials in the United States, Brazil, Bangladesh, and Thailand.  As a result of the technology transfer from NIH, the ongoing Phase 3 clinic trial in Brazil, and the completion of a state-of-the-art manufacturing plant, the Butantã Institute is now well positioned to produce the vaccine and make it available for large-scale immunization initiatives in Brazil.

Secretary Azar met with senior leadership at the São Paulo State Research Foundation (FAPESP) including State Health Secretary Marco Antonio Zango, where he highlighted the extensive history of U.S. scientific cooperation with the foundation.  He also delivered a speech to an audience composed of members of São Paulo’s scientific and innovation community in which he highlighted his priorities to spur the innovation economy in the United States, including leveraging research collaborations and utilizing public-private partnerships.  He then attended a roundtable meeting moderated by the Brazilian-American Chamber of Commerce, which focused on private sector innovations in Brazil to spur value-based transformation in the health system.

On October 3, he met with Venezuelans who had fled from their country, as well as with representatives of the city of São Paulo and businesses who are partnering to help employ and assimilate the Venezuelans into Brazilian society.

Additional information regarding the Department of Health and Human Services, visit: