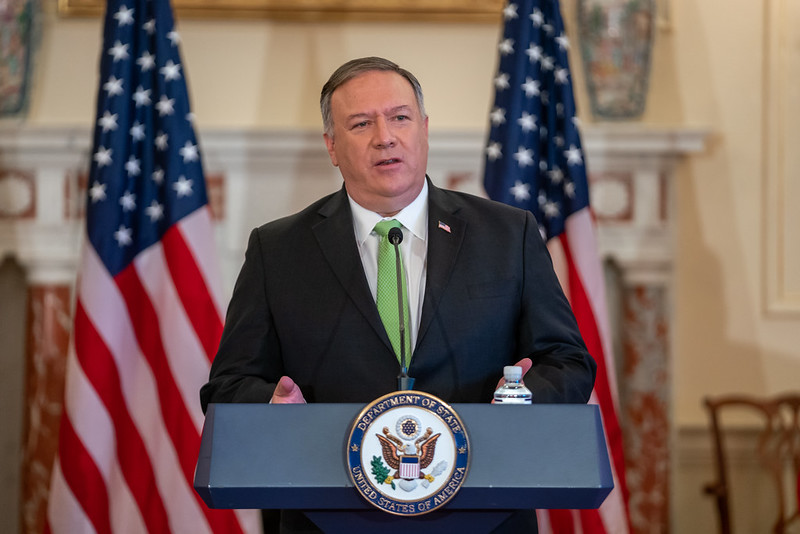 Published by O Globo on September 27, 2020
This text was originally published in English on First Things

The human rights situation in China has deteriorated severely under the autocratic rule of Xi Jinping, especially for religious believers. Credible reports have exposed the Chinese Communist Party’s program of forced sterilizations and abortions of Muslims in Xinjiang, its abuse of Catholic priests and laypeople, and its assault on Protestant house churches—all of which are parts of a “Sinicization” campaign to subordinate God to the Party while promoting Xi himself as an ultramundane deity. Now more than ever, the Chinese people need the Vatican’s moral witness and authority in support of China’s religious believers.

Vatican diplomats are meeting this month with their CCP counterparts to negotiate the renewal of a two-year-old provisional agreement between the Holy See and China. The terms of that pact have never been publicly disclosed; but the Church’s hope was that it would improve the condition of Catholics in China by reaching agreement with the Chinese regime on the appointment of bishops, the traditional stewards of the faith in local communities.

Two years on, it’s clear that the Sino-Vatican agreement has not shielded Catholics from the Party’s depredations, to say nothing of the Party’s horrific treatment of Christians, Tibetan Buddhists, Falun Gong devotees, and other religious believers. The State Department’s 2019 annual report on religious freedom provides an illustrative example in the story of Father Paul Zhang Guangjun, who was beaten and “disappeared” for refusing to join the CCP-run Patriotic Catholic Association. Sadly, his experience is not unique. Communist authorities continue to shutter churches, spy on and harass the faithful, and insist that the Party is the ultimate authority in religious affairs.

As part of the 2018 agreement, the Vatican legitimized Chinese priests and bishops whose loyalties remain unclear, confusing Chinese Catholics who had always trusted the Church. Many refuse to worship in state-sanctioned places of worship, for fear that by revealing themselves as faithful Catholics they will suffer the same abuses that they witness other believers suffer at the hands of the Chinese authorities’ increasingly aggressive atheism.

In Hong Kong, the local government’s recent imposition of a Beijing-mandated National Security Law raises the specter that the Party will use the same tactics of intimidation and the full apparatus of state repression against religious believers. Hong Kong’s most prominent voices for human dignity and human rights have often been Catholics, so it is no surprise that prominent Catholics like Martin Lee, the “father of democracy” in Hong Kong, and Jimmy Lai, an outspoken media baron and promoter of democracy, have been arrested, spied on, and harassed for the simple “crime” of advocating the basic freedoms Beijing promised to protect in exchange for regaining sovereignty over Hong Kong in 1997. I know both men and can attest to their goodness and sincerity of heart. Their devotion to God, to all God’s children, and to a peaceful, free, and prosperous China is undeniable.

Many nations have joined the United States in expressing revulsion at the Chinese regime’s accelerating violations of human rights, including religious freedom. Last year, 22 nations sent a letter to the U.N. Human Rights Council to denounce the CCP’s detention of more than a million Uyghur Muslims, ethnic Kazakhs, and other minorities in so-called “re-education” camps in Xinjiang. The Inter-Parliamentary Alliance on China, which includes legislators from democracies around the world, has deplored the Party’s “unfolding atrocities.” The State Department has been a strong voice for religious freedom in China and around the world and has taken steps to hold those who abuse the faithful responsible for their actions. We will continue to do so.

The Holy See has a unique capacity and duty to focus the world’s attention on human rights violations, especially those perpetrated by totalitarian regimes like Beijing’s. In the late twentieth century, the Church’s power of moral witness helped inspire those who liberated central and eastern Europe from communism, and those who challenged autocratic and authoritarian regimes in Latin America and East Asia.

That same power of moral witness should be deployed today with respect to the Chinese Communist Party. The Second Vatican Council and Popes John Paul II, Benedict XVI, and Francis have taught that religious freedom is the first of civil rights. Solidarity is one of the four foundational principles of Catholic social doctrine. What the Church teaches the world about religious freedom and solidarity should now be forcefully and persistently conveyed by the Vatican in the face of the Chinese Communist Party’s relentless efforts to bend all religious communities to the will of the Party and its totalitarian program.

Pope Francis said in 2013 that “Christians must respond to evil with good, taking the Cross upon themselves as Jesus did.” History teaches us that totalitarian regimes can only survive in darkness and silence, their crimes and brutality unnoticed and unremarked. If the Chinese Communist Party manages to bring the Catholic Church and other religious communities to heel, regimes that disdain human rights will be emboldened, and the cost of resisting tyranny will rise for all brave religious believers who honor God above the autocrat of the day. I pray that, in dealing with the Chinese Communist Party, the Holy See and all who believe in the divine spark enlightening every human life will heed Jesus’s words in the Gospel of John, “The truth will set you free.”