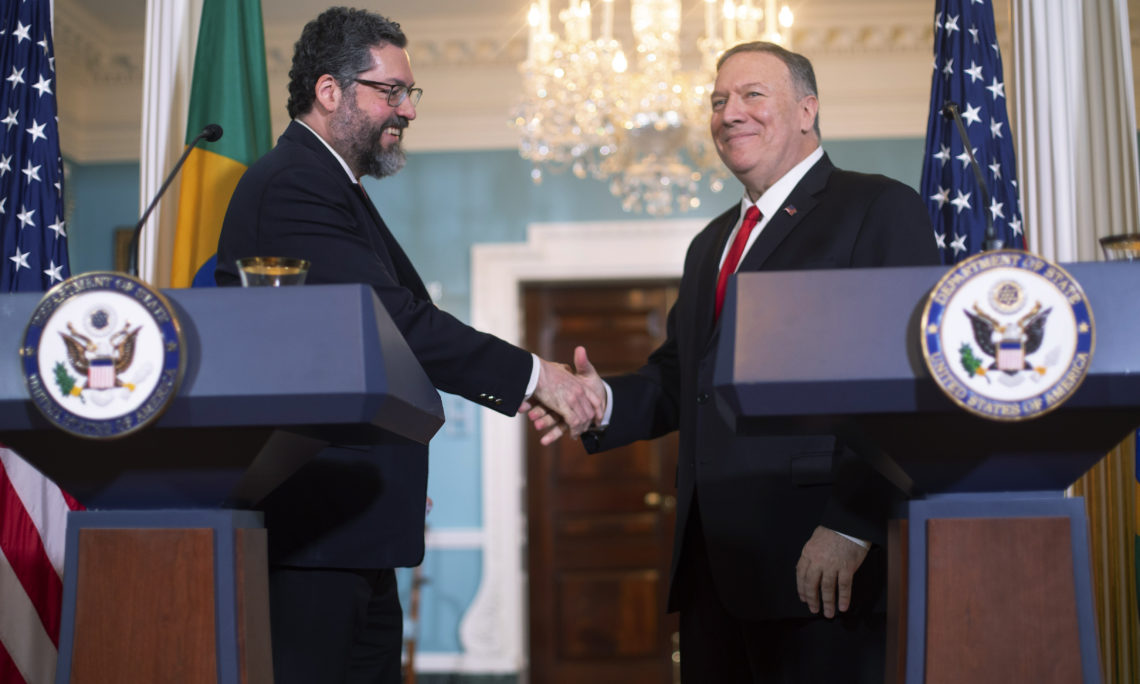 Office of the Spokesperson
For Immediate Release

SECRETARY POMPEO:  Good morning, everyone.  It’s my great pleasure to welcome my friend Foreign Minister Araujo and other distinguished members of the Brazilian delegation to the State Department.  Ernesto and I have developed a great working relationship over the past 10 months.  I just saw him the other day at the White House.  And my first trip of 2019 was to attend the inauguration in Brazil of President Bolsonaro.  I celebrated New Year’s Eve somewhere in the sky on the way down there, and it got me in just the right celebratory mood for that big day.

When President Trump and President Bolsonaro met at the White House last March, they committed to expand and strengthen our strategic partnership.  It’s why today we’re holding our first strategic dialogue in seven years.  But the change in our relationship is much bigger than any one meeting or set of meetings.  We’ve entered a deep, new important era in U.S.-Brazil ties.

Brazil, under President Bolsonaro’s leadership, has importantly embraced a greater role for the free market, the best driver of economic growth and prosperity.  And Brazil, a major democracy, firmly supports the only true democracy in the Middle East, Israel, as well.  And Brazil has been a stalwart partner, friend in the Lima Group helping us altogether support the Venezuelan people.

Brazil, in fact, was among the very first nations to recognize the administration of Venezuela’s legitimate leader, Interim President Juan Guaido.  In August 2019, Brazil announced it would prevent Maduro’s senior officials from traveling through Brazil.

Right now, Brazil is hosting more than 180,000 Venezuelans who have fled economic collapse and tyranny that the Maduro regime has caused.  This generosity is a testament to your country’s commitment to regional security and the protection of human rights.

All of Brazil’s efforts give the United States great confidence to cooperate in new ways.  We’re going to grow our trade relationship that already accounts for more than $100 billion annually.  And this month the President – excuse me – the Brazilians and the American teams will follow through on our commitment that our presidents made in March.  We’re getting off the ground a $100 million 11-year Impact Investment Fund for Amazon biodiversity conservation, and that project will be led by the private sector.

Our security cooperation is growing too.  This year President Trump designated Brazil a major non-NATO ally.  And today I am pleased to say that Brazil is building on the work of the Ministerial to Advance Peace and Security in the Middle East that was held in Warsaw last February.  Brazil will co-host a Warsaw Process working group on humanitarian issues and refugees on February 5th and 6th of next year.

We’re also working together to confront the man-made crisis in Venezuela and push back against tyrants in Cuba and in Nicaragua.

Together, we are seizing the opportunity to cement a future of security, prosperity, and democracy for our people and for the entire hemisphere.

Thank you again for coming to Washington.  It was great to be with you today.

FOREIGN MINISTER ARAUJO:  Thank you, very much, Mr. Secretary.  Good morning to you all.  This is, I believe, the fourth time we have a meeting this year with Secretary Mike Pompeo, once in Brasilia and three times here in Washington, apart from the times we met at the margin of other events.  This is overall my sixth time visiting the United States this year, counting the one that I came with President Bolsonaro, so I think this clearly shows that we are working hard to deliver on the commitment of our two presidents to really build a very strong partnership and alliance between Brazil and the United States.

One important step we’re taking today with the meeting of the Strategic Partnership Dialogue, and we were talking about that, we really want to make it strategic in the sense of being a forum where we can discuss the interconnection of different initiatives, of different areas of endeavor, where we can plan for the future, and where we can, through different initiatives, reinforce the whole relationship.  We do that on the basis of, I think, a shared vision of the world, which makes it even stronger, apart from the concrete interests, economic, other interests that we have.  But whenever, which is the case now, we have a common vision, a common philosophy so to say, it can be and it must be even stronger.

And our relationship with the United States is a big part of accomplishing those objectives, those principles of foreign policy and foreign engagement.  We are seeing that concretely in many cases, in the case of Venezuela for example, where we totally stand together in the effort to help Venezuelans recover their democracy.  We are also translating that in our economic and trade engagement, which is going forward very quickly and actually responding to the huge expectations from our private sector and productive sector, which we’re seeing, again, in the area of security and defense.

The status of a major non-NATO ally that Brazil now has with the United States is immensely important for us, and we want to translate that into concrete steps that reinforce Brazil’s role in peace and security, security for Brazilians.  It’s a priority for our people to live in a secure and safe environment.  So everything that the Brazilian people wants from our government, that’s something that we can achieve in a good part in cooperation with the United States.

Also, across the world now we see some signs of ideas that would question sovereignty, that would be in a sense of, in the case of Brazil, that we specifically in the Amazon, that we maybe are not able to cope with the challenges of the environment there, which no, that’s not true.  And our friends here in the U.S. know that’s not true, and we want to be together in the effort to create development for the Amazon region, which we are convinced that is the only way to really protect the forest.  So we need new initiatives, new productive initiatives that create jobs, that create revenue for people in the Amazon, and that’s where our partnership with the United States will be very important for us.

So we have this very ambitious agenda, and we are convinced that we are delivering on it.  Thank you very much.

SECRETARY POMPEO:  Great.  Thank you all.