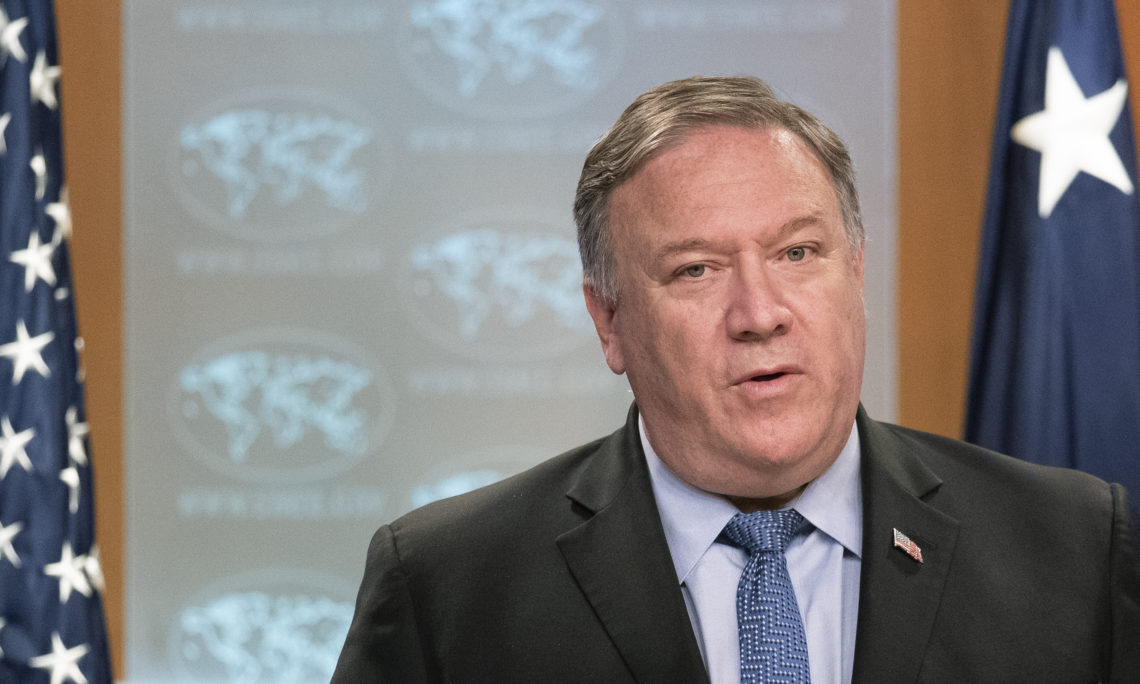 Office of The Spokesperson

This mission is not just a Trump administration priority – it’s a deeply personal one.  For many years, I was a Sunday school teacher and a deacon at my church.

And that might sound unusual to a lot of folks inside the Beltway.  But I am one of millions of Americans, and billions of people across the world, who live in the knowledge of a higher power.  I often humbly reflect on how God’s providence has guided me to this office, to defend this cause.  I think about how, as an American, I’ve been blessed to enjoy the unfettered exercise of religious freedom*, our first liberty* here in the United States.

But in much of the world, governments and groups deny individuals that same unalienable right.  People are persecuted – handcuffed, thrown in jail, even killed – for their decision to believe, or not to believe.  For worshipping according to their conscience.  For teaching their children about their faith.  For speaking about their beliefs in public.  For gathering in private, as so many of us have done, to study the Bible, the Torah, or the Qu’ran.

Go into any mosque, any church, any temple in America, and you’ll hear the same thing:  Americans believe that kind of intolerance is deeply wrong.

That’s why the Trump Administration has promoted religious freedom like never before in our foreign policy agenda.  Given our own great freedoms, it’s a distinctly American responsibility to stand up for faith in every nation’s public square.

So today, I’m pleased to announce that, here at the State Department, we’re elevating the Office of International Religious Freedom, along with the Office of the Special Envoy to Monitor and Combat Anti-Semitism, within our organization.

Effective immediately, each of these two offices will report directly to the under secretary for civilian security, democracy, and human rights.

Sam Brownback, the ambassador-at-large for religious freedom, will continue to report directly to me.

This reorganization will provide these offices with additional staff and resources, and enhance partnerships both within our agency – within our agency and without*.  It will empower them to better carry out their important mandates.

Second:  I’m pleased to announce the religious – the release of the religious – International Religious Freedom Report for 2018.  It’s like a report card – it tracks countries to see how well they’ve respected this fundamental human right.  I’ll start with the good news:

In Uzbekistan, much work still remains to be done, but for the first time in 13 years, it’s no longer designated as a Country of Particular Concern.

This past year, the government passed a religious freedom roadmap.  Fifteen hundred religious prisoners have been freed, and 16,000 people that were blacklisted for their religious affiliations are now allowed to travel.  We look forward to seeing legal reforms to* registration requirements, so more groups may worship freely, and so children may pray at mosques with their parents.

In Pakistan, the supreme court acquitted Asia Bibi, a Catholic, of blasphemy, sparing her the death penalty after she spent nearly a decade in prison.  However, more than 40 others remain jailed for life, or face execution on that very same charge.  We continue to call for their release, and encourage the government to appoint an envoy to address the various religious freedom concerns.

And in Turkey, at President Trump’s urging, they released Pastor Andrew Brunson, who had been wrongfully imprisoned on account of his faith.  We continue to seek the release of our locally employed staff there.  In addition, we urge the immediate reopening of the Halki Seminary near Istanbul.

Look, we welcome all of these glimmers of progress, but demand much more.  2018, unfortunately, was far from perfect.

As in previous years, our report exposes a chilling array of abuses committed by oppressive regimes, violent extremist groups, and individual citizens.  For all those that run roughshod over religious freedom, I’ll say this:  The United States is watching and you will be held to account.

In Iran, the regime’s crackdown on the Baha’is, Christians, and others continues to shock the conscience.

In Russia, Jehovah’s Witnesses were absurdly and abhorrently branded as terrorists, as authorities confiscated their property and then threatened their families.

In Burma, Rohingya Muslims continue to face violence at the hands of the military.  Hundreds of thousands have fled or been forced to live in overcrowded refugee camps.

And in China, the government’s intense persecution of* many faiths – Falun Gong practitioners, Christians, and Tibetan Buddhists among them – is the norm.

The Chinese Communist Party has exhibited extreme hostility to all religious faiths since its founding.  The party demands that it alone be called God.

I had a chance to meet with some Uighurs here, but unfortunately, most Chinese Uighurs don’t get a chance to tell their stories.  That’s why, in an effort to document the staggering scope of religious freedom abuses in Xinjiang, we’ve added a special section to this year’s China report.

History will not be silent about these abuses – but only if voices of liberty like ours record it.

Finally, I’ll mention just one more reason this report matters so much:  It will inspire conversations leading up to our second annual Ministerial to Advance Religious Freedom that I’ll be hosting here in mid-July.

This year, we’ll welcome up to 1,000 individuals who will renew their zeal for the mission of religious freedom, and I’m proud to be one of them.

I’m crossing the days off my calendar waiting for this.  Last year was the first time in history that there had been such a foreign-ministerial level conference on religious freedom.

We brought together representatives and activists and religious leaders from virtually every corner of the world.  It was truly a stunning show of unity – people of all faiths standing up for the most basic of all human rights.  It was so successful that I immediately committed to hosting it the next year on the very day.

Look, the good work that was done didn’t stop at the end of that conference.  Both the United Arab Emirates and Taiwan demonstrated impressive leadership by hosting follow-on conferences.  And the International Religious Freedom Fund, which we launched to support victims of persecution and give groups the tools to respond, has already received millions of dollars.  I’m looking forward to this year’s ministerial being inspiring, and I know that it will be.

And I’ll now turn it over to my friend and our Ambassador-At-Large for International Religious Freedom, Sam Brownback, to take your questions.  Thank you, all.

QUESTION:  Can you say whether you supported airstrikes on Iran last night?

To read the report’s section on Brazil, please visit https://www.state.gov/reports/2018-report-on-international-religious-freedom/brazil/