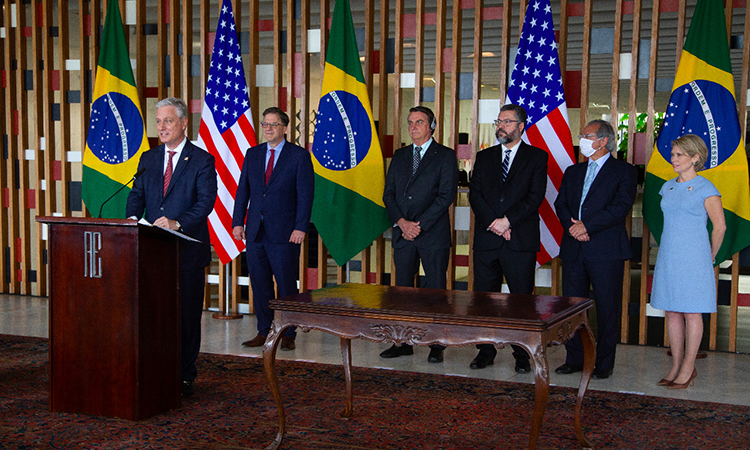 The United States and Brazil Strengthen Economic and Bilateral Ties

The two countries signed a trade protocol and the U.S. extended over R$ 11 billion reais for investment and export financing.

Brasilia, October 21, 2020: During his two-day visit to Brazil, the U.S. National Security Adviser, Robert C. O’Brien, was accompanied by the largest economic-focused, high-level delegation from the U.S. government in decades. The meetings held with senior Brazilian government officials and private sector leaders addressed a broad spectrum of bilateral issues, including deepening our cooperation to promote economic growth, improve the investment climate, security, and to continue working to address regional challenges, among others. The United States and Brazil announced a historic, gold standard Protocol on Transparency and Trade Rules which starts a new chapter in the two countries’ economic relationship by boosting trade and job creation in Brazil and the United States. Additionally, the United States made available a total over R$ 11 billion reais in financing, letters of interest and a Memorandum of Understanding with the Government of Brazil to promote investment in Brazil and enhance the strong alliance and trading relationship between the two countries with the potential to stimulate the creation of thousands of new jobs.

On the visit, Ambassador O’Brien was accompanied by Kimberly Reed, President and Chairman of the Export Import Bank, Michael Nemelka, Deputy U.S. Trade Representative, and Sabrina Teichman, Development Finance Corporation Managing Director for the Western Hemisphere.  In Brasilia, Ambassador O’Brien and his delegation held meetings with President Jair Bolsonaro, Minister of Foreign Affairs, Ernesto Araújo, Minister of Institutional Security, General Augusto Heleno, and Minister of Economy, Paulo Guedes, to discuss a range of issues related to investment and trade, security, and joint collaboration to address COVID-19, as well as other regional and international challenges.

The U.S.-Brazil 2020 Protocol on Transparency and Trade Rules was signed by the U.S. Trade Representative Robert Lighthizer, in Washington, D.C., and Brazil’s Minister of Foreign Affairs Ernesto Araujo, and Minister of Economy Paulo Guedes, in Brasilia, on a video call on October 19. The Protocol updates the existing Agreement on Trade and Economic Cooperation, in place since 2011, with three new annexes that will deliver practical benefits to all sectors, by helping to streamline bureaucratic procedures and reduce the costs of doing business.  The agreement sets out measures for Customs Administration and Trade Facilitation, Good Regulatory Practices, and Anticorruption.  For more information on the U.S.-Brazil Protocol on Trade Rules and Transparency, visit the factsheet here: https://br.usembassy.gov/fact-sheet-u-s-brazil-protocol-on-trade-rules-and-transparency-2/

In Brasilia on October 20, President and Chairman Kimberly Reed of the U.S. Export Import Bank (EXIM Bank) signed a R$ 5,6 billion reais Memorandum of Understanding with Brazil’s Economy Minister Guedes aimed at enhancing the strong trade and economic relationship between the two countries, with a particular focus on helping Brazilian companies acquire technology, equipment, and other assets from U.S. or other trusted suppliers, helping to safeguard Brazilian innovation and promote joint investment. More information on the EXIM Bank agreement can be found on the factsheet here: https://br.usembassy.gov/export-import-bank-of-the-united-states/

During the visit, the National Security Council also extended an invitation for Brazil to join the NASA-led Artemis Accords, an international initiative grounded in the Outer Space Treaty of 1967. The Accords focus on creating a safe and transparent environment which facilitates space exploration, science, and commercial activities for the benefit of all nations. For further details about the Artemis accords, please see the factsheet here: https://br.usembassy.gov/fact-sheet-artemis-accords-united-for-peaceful-exploration-of-deep-space/

During the delegation’s visit to São Paulo on October 19, the Development Finance Corporation announced a R$ 2.24 billion reais loan to Banco Itaú that will support lending to small and medium-sized enterprises (SMEs) as well as a R$ 140 million reais investment that will enable TechMet Limited to boost the production capacity of a cobalt and nickel mine in Piauí, Brazil, and signed two letters of interest, one for a R$ 1.45 billion reais investment guarantee to Smart Rio, which will modernize, maintain, and retrofit all existing public lighting fixtures as well as the expand current public lighting infrastructure and install cameras, Wifi access points, and smart transit controllers in Rio de Janeiro, and another letter of interest for a R$ 1.68 billion reais direct loan to support the expansion of BTG Pactual’s SME loan portfolio with a portion of loan proceeds focusing on lending to eligible majority women-owned businesses and SMEs located in the economically disadvantaged regions of the North and Northeast of Brazil. For more information on DFC activities in Brazil, please see the factsheet here: https://br.usembassy.gov/us-international-development-finance-corporation/

While in Sao Paulo, the delegation also held meetings with FIESP President Paulo Skaf, as well as FIESP and Amcham Brasil leadership and took part in a videoconference with Brazilian business leaders to deepen the relationship between Brazil and the United States on relevant economic and commercial issues including trade facilitation and the expansion of bilateral trade and investments generating greater economic prosperity for both countries.