Home Home / News & Events / “There will be no growth without challenges,” says US Ambassador to Brazil 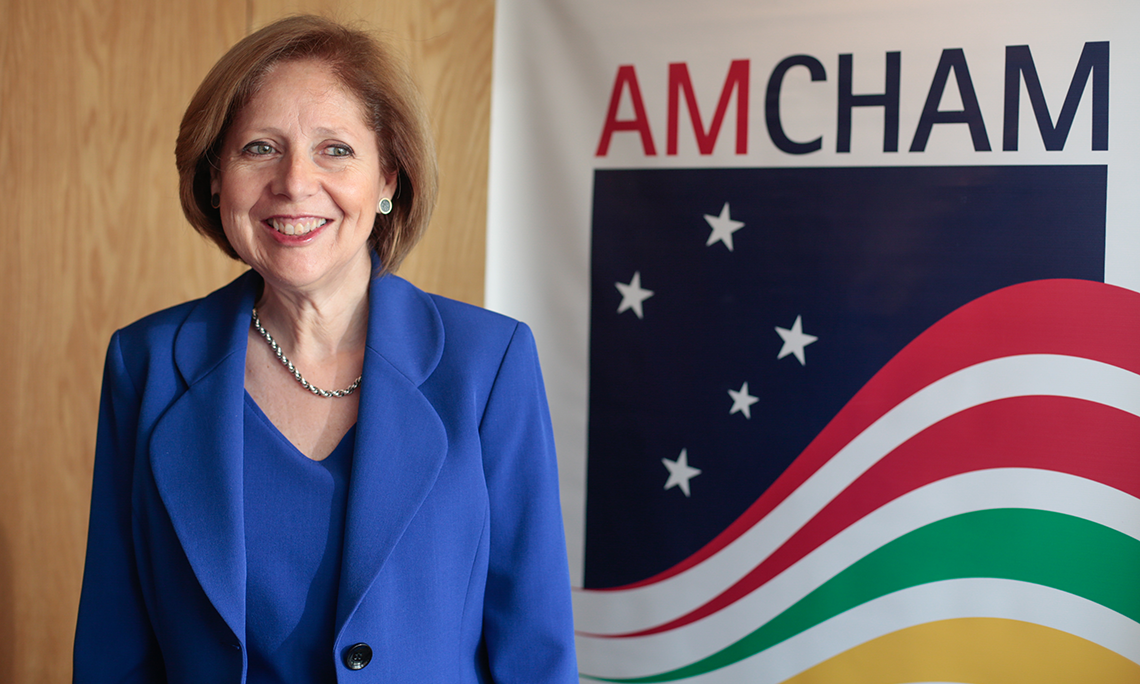 Interview granted to Cláudio Motta and Bernardo Guimarães, from AmCham-Rio, and published on June 3, 2014.

US companies continue to bet on the Brazilian market, says the US Ambassador to Brazil, Liliana Ayalde, in an exclusive interview with Brazilian Business magazine. They are investing in training people and jointly developing new technologies, as well as cooperating with federal, state and municipal governments. In 2012 alone, bilateral investment totaled about US$ 100 billion, with the Americans injecting US$ 79 billion into Brazil.

Besides the cooperation agreed for major sporting events, such as the FIFA World Cup, topics such as security, energy, education, gender and race equality are among the priorities. “The interest of the American government in Brazil and the consequent commitment between the two countries really is a positive development and an indicator of the future of Brazil-US relations. We hope that after the elections in October our agenda will be stepped up so we can work on a relationship that already runs deep and is mutually beneficial,” said the Ambassador during a speech at the event to usher in the new board of AmCham Rio, on May 5.

In Rio de Janeiro, security, infrastructure, and oil and gas are among the main factors attracting new American companies. In oil and gas there are now about 90 active companies, and Liliana stressed: “The industry has been and will remain an important component of a broad and deep relationship between Brazil and the United States.”

Even the most sensitive issues, such as problems involving the National Security Agency (NSA) – which is why President Dilma Rousseff decided to cancel a visit to the US late last year – do not go unanswered in this interview. According to Liliana, that episode had an impact on bilateral relations but the future is promising, with opportunities as big as Brazil. And the United States.

Brazilian Business: In October 2013, President Dilma Rousseff canceled a visit to the United States as a result of the fallout from the case involving the NSA. How can relations between Brazil and the country be rebuilt?

Liliana Ayalde: Definitely, that was not a good time. I don’t want to play down the fact that it had an impact on our relations. Nevertheless, they have remained strong. We have kept up with meetings and appointments in various sectors, not only in business, but also in education and other matters of common interest. Our relations are moving forward. Whether it is increased numbers of Brazilians tourists to the USA, the demand from Brazilian students going to American educational institutions, or in trade relations between the two countries. Politically, we are progressing well and we have a number of important commitments scheduled. The US Vice President, Joe Biden, will travel to Brazil for the World Cup, among other high-level visitors.

BB: What is needed to eliminate visa requirements to enter the USA?

LA: The Visa Waiver Program (which would eliminate the need for a visa) was tabled by the private sector and has been consistently included in diplomatic talks between the two countries. After the NSA’s exposure in the media, this dialogue was temporarily put on hold. Now we are returning to this subject. As you know, there are legal requirements for countries wishing to enter the program. We need to meet, talk and swap information about the necessary legal framework. It is a process. Currently we are in contact with the Foreign Ministry, working in meetings to move forward and implement the Global Entry Program (which maintains the visa requirement, but which would speed up the process of entry into the USA).

BB: What is still t be done?

LA: There are requirements in legislation. One is the visa approval rate. Currently, Brazil’s is on 96%, and the requirement is 97%. It is a positive number, but there are still systems that need to be implemented, such as the exchange of passenger information, for example. First is the decision to do it, and then the technical capacity to implement this new process. That is, there are technical issues, but politicians also need to be aligned. For this to happen, there has to be a high level of commitment to the program rules.

BB: Chile has already achieved this stage and is on the Visa Waiver Program. What can we learn from them about the process?

LA: That’s a good point. I think it would be worth talking to the Chileans about it. For Chile, it was a process that took three years. It wasn’t quick, but rather a long-term commitment.

BB: How do you view bilateral relations between Brazil and the USA?

LA: We have a great platform of common interests, both in trade and global politics. Our relations are very strong. We have a large number of American companies here in Brazil, such as in oil and gas. There are a lot of opportunities. We can share our technology and expand our relations in the energy sector.

BB: What are the main points that can be improved between the two countries?

LA: In education, the USA gets the majority of Science Without Borders students. We currently have 22,000 students at more than 300 American institutions. We would like to do more and there is room for that. But there are areas that call for meticulous attention, certainly on the commercial side and in commercial dialogue, on the issue of intellectual property and in the energy industry. The question now is: what can we do before the World Cup, as the calendar demands a large government presence at the event, and – of course – there are also the elections? Mutually, we’re doing our best, setting up dialogue about economic partnership. Innovation and technology are on the agenda for the upcoming meetings between our Secretaries and Brazil’s Foreign Ministry.

BB: Is English is still a problem for Brazilians on the Science Without Borders program?

LA: Students had to return to Brazil because they did not speak the language, but this problem did not significantly involve US universities. To try to deal with this situation, English Without Borders has been created. And I think we have done a good job with local authorities selecting and preparing students well for them to have the appropriate level of English. This does not mean it is not still a challenge. We want the project to be inclusive, and not just for people from Brasilia, Rio de Janeiro, and São Paulo. It is important to have all the states together, with more racial and economic diversity. However, the challenge gets bigger when we leave the region where the largest number of people who speak English is concentrated.

BB: Returning to the economic agenda, how can we avoid double taxation?

LA: There is no doubt that avoiding double taxation would be a breakthrough. We have to wait for requests to be able to move forward with the agenda. But we believe it would be an important step in trade relations between the two countries.

BB: You are a public health expert. What changes in the US with the Affordable Care Act, known as ‘Obama Care,’ signed by the President last year? And how do you see Brazil in this area?

LA: Healthcare is a matter of prime importance. It’s what people are asking for. Obama Care allows people to get support for their basic health needs for a lower price, as the cost for medical care in the US has been rising fast, making it difficult for US citizens to afford health insurance. The promise is that this model can take in all these people who don’t have insurance. Brazil has other models, such as More Doctors, which I understand to be temporary. We have different situations, but I think we can learn from each other. With more than eight million people registered, we’re betting that Obama Care will work.

BB: Let’s talk about sports. What is your expectation for the World Cup?

LA: We are very excited! We are one of the 32 participating delegations. We have worked with various authorities to share some of our experiences in how big events have been held in the USA, not only in security, but in other respects. We hope things go well and the fans take good memories of the competition home. It is a lot of work, even more so because the competition takes place in 12 cities.

BB: Thousands of US fans will be coming to Brazil…

LA: We have been surprised by the sales of tickets to Americans and the last time I checked the number had increased. We are expecting more than 180,000 Americans, which is great because they will be able to see the country, learn more about Brazil’s culture and further strengthen connections between the two nations. We are organizing Consular teams in each participating city, providing American citizens with information and help in dealing with problems, such as lost passports. We are expecting Americans all over Brazil. The Vice President (Biden) will watch the games in Natal.

BB: And do you have a hunch about who is going to win?

LA: That’s a very important question and very dangerous territory for me to get into (laughs)! What I can say is that I hope the American delegation does its best.

BB: About the Olympics, do you see any opportunities and partnerships between Brazil and the USA?

LA: Certainly. We have two projects now running in the Northeast, organizing soccer workshops with foundations that work with girls and others that work with children in need. In São Paulo, we are working with members of our soccer teams involving children with the arts, keeping them busy and keen on exercise and creativity, painting graffiti on walls around the American Consulate in the city. On the security side, more partnerships will be established with local governments that will also be beneficial for the Olympics. Rio has already hosted several major events, such as the Confederations Cup and World Youth Day – you have a lot of experience. Of course the Olympics is a different scenario: lots of countries, lots of people, lots of logistics. There is time to plan and increase investment. Alliances between the US and Brazilian governments are also ongoing. The Governor of Maryland has been to Brazil and shared his experience, which could be useful for cleaning up Guanabara Bay, for example. There are a lot of opportunities and there is a lot of interest. There is room for everything.

LA: What brings me to Rio is the importance of this partnership. It has been important for many years and it is now more so. There’s a new wave of growth in Rio. It is our pleasure to celebrate the leadership that AmCham Rio has provided over all these years and we know that we will continue to provide any assistance at close quarters that the institution needs to continue generating new business. It is a relationship that has several positive factors, able to focus on the challenges and identify obstacles to growth. There will be no growth without challenges. Through AmCham Rio, with all the understanding of these problems, with robust and growing membership, I believe we will continue working together in the future. I really hope to be here for the centenary.